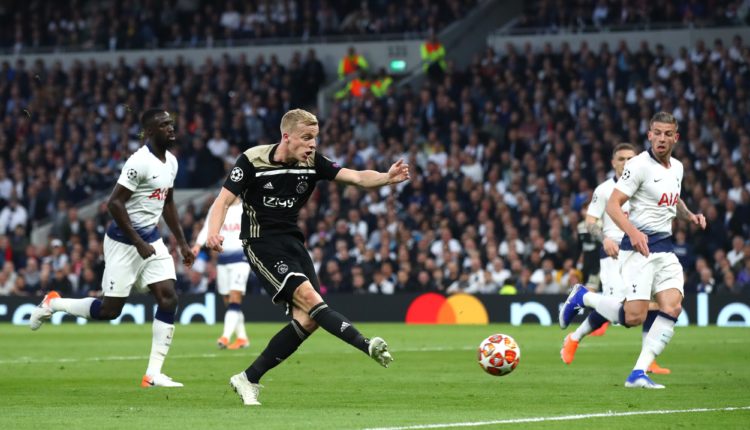 Ajax Amsterdam took a giant step to enter the UEFA Champions League final as they eased past a below par Tottenham Hotspur 1-0 in the first leg on Tuesday evening.

Spurs who were without injured Harry Kane and suspended Son Heung-min lacked attacking hunger and they were the second best throughout the contest.

Meanwhile the high flying Ajax who stunned Real Madrid and Juventus in previous rounds were determined to follow their fine form as they went ahead on 13 minutes through Donny Van de Beek’s close-range finish.

Spurs lacked creativity and precision against the youthful Ajax side who restricted the moves of Mouricio Pochettino’s side.

The hosts started the second half with added energy and game plan as Dele Alli, who had a quiet first half, went close with a couple of efforts inside the opening 10 minutes.

Ajax almost killed the game on 78th minute when van de Beek held off Christian Eriksen’s challenge and found Tadic, who in turn passed the ball to David Neres whose left-foot shot beat Lloris only to hit the post.

? SO CLOSE! The moment Ajax star David Neres hit the post in the second half ?#UCL pic.twitter.com/in6CiIQduK

The North London outfit threw everything forward in search of an equaliser, but Ajax held on to inflict the hosts a consecutive second defeat in their new home ground.

The Tottenham boss was disappointed with the result but he hoped the contest is not yet over.

“It was really tough and we cannot afford to start the game in the way that we started. That was the key point.

They showed more energy than us, they were fresh and more proactive than us.

After 30 minutes, when Moussa Sissoko came in, we were better. In the second half, the reaction was very good and we pushed them.

The second half was very competitive and we created a few chances, not enough to score, but the tie is so open and we need to go there next week and try to score and win the game if we want be in the final.”

AC Milan’s Gattuso : “We are ruining the image of this historic club”