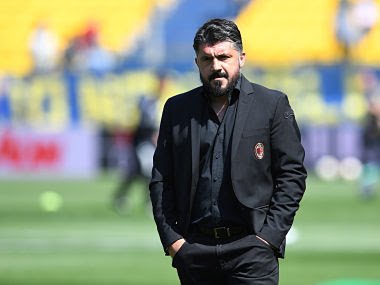 AC Milan and head coach Gennaro Gattuso have parted ways by “mutual agreement” after the Serie A club missed out on Champions League qualification.

The 41-year-old AC Milan legend who played 468 matches for the club, had two years left on his contract but took the responsibility of the dismal run of the seven time European champions and stepped down.

?⚫️After AC Milan parted ways with Gattuso, the Italian manager has renounced his contract which means he gave up €5.5 million, saying "My story with Milan can never be about money.”

What a man. Respect. ? pic.twitter.com/FrkoFArzDj

“A true Rossoneri (red and black) legend, Gennaro stepped into the role during what was a difficult period for the club and has performed admirably, securing the club’s highest league points total since 2012/13.”

“AC Milan wishes to thank Gennaro Gattuso for his leadership during the last 18 months,” said a club statement.

Milan missed out on a place in next season’s Champions League by one point as they finished fifth after neighbors Inter Milan.

“I have had the privilege to get to know Rino Gattuso over the past six months since my arrival at the club,” said AC Milan chief executive Ivan Gazidis.

“Rino has given everything to our efforts this season, and has worked tirelessly, always taking full responsibility, putting the club above every other consideration.

“I want to say from the bottom of our hearts, thank you Rino.”