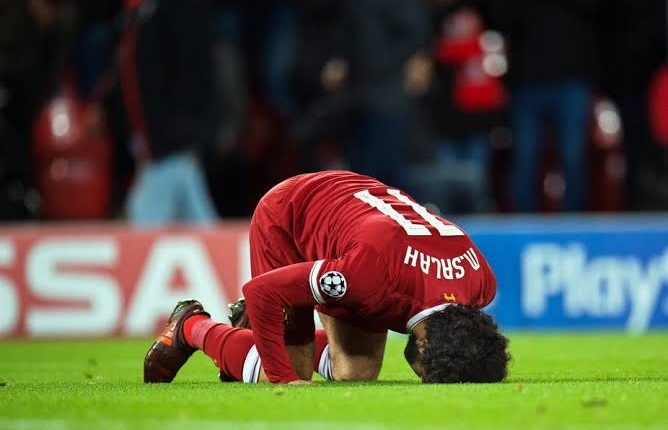 The study conducted on constructive social impacts at many levels during Salah’s stay with the newly crowned European champions reveals that since the Muslim Egyptian footballer arrived in Liverpool’s Merseyside, the area has witnessed a noticeable decline in hate crimes of 18.9 percent.

Interestingly, hate crimes are the only subcategory of crimes that saw this decrease in Liverpool during the research period.

Just in time for the #UCLfinal, here's the latest IPL research, on soccer, celebrity, and Islamophobia. @MoSalah @LFC https://t.co/JrWwA2k6Xj

“By watching games, post-game interviews, promotional videos released by the club, and content on Salah’s social media pages, fans are exposed to rich information about Salah’s life on and off the field,” the researchers wrote. “Viewers see what a Muslim prayer looks like, perhaps for the first time, when Salah scores.”

The study’s introduction raised one preeminent question: “Can exposure to successful celebrities from stigmatized groups reduce prejudice toward that group at large?”

The study answered this question with accumulated data figures and statistics.

The IPL used a a mix of methods as they made a survey of more than 8,000 Liverpool fans in addition to observing 15 million tweets and monitoring county-month hate crimes to gauge how Salah’s presence in the UK has influenced Islamophobic behaviors and attitudes.

The compiled “Islamophobic behaviors” took various forms including anti-Muslims tweets. The study indicated that Reds fans’ rates of hatred-based tweets lessened from 7.2 percent down to 3.4 percent since the arrival of the famed Egyptian.

Researchers who worked on generating these findings believe that this drop is a result of spotlighting respectable role models such as Salah and other notable celebrities.

ILP’s researchers believe that Salah played a significant role in changing the mindset of English people towards Islam, which was entertainingly illustrated in the Reds’ chants during Salah’s appearances, including:

“If he scores another few / Then I’ll be Muslim, too,

Sitting in a mosque / That’s where I wanna be”.

According to the study, from the start, European fans were not familiar with some Islamic rituals practiced by Salah, including the sujood, which he performs after any victory during a match. Salah’s sujood was featured in the videogame FIFA 2019 that went viral globally in no time.

“Yes, I know we have one at home. This is a new one” pic.twitter.com/9q8L7fSOgB

These practices have stirred arguments. Some believe that Salah illustrates “favorable images of Muslims, helping to reduce stereotypes and break down barriers within communities” while others did not agree that Salah has been behind those impacts.

In the same vein, the study drew a relationship between prejudice and exposure, connecting Salah’s positive appearance on social media networks with declined prejudice. It analyzed the ways in which Salah’s activities, pictured on social media, built up tender relationships with fans.

Salah is a back-to-back Premier League Golden Boot winner. He also scored the first goal in the UEFA Champions League Final, which ended in a win for the Reds. As a recognition for his influence among the masses, he was named one of TIME’s 100 most influential people in the world.

You can read the full paper published by IPL here

The joy of reading football

The Local Cosmopolitan Clashes of World Cup: A Curious Case of Kerala