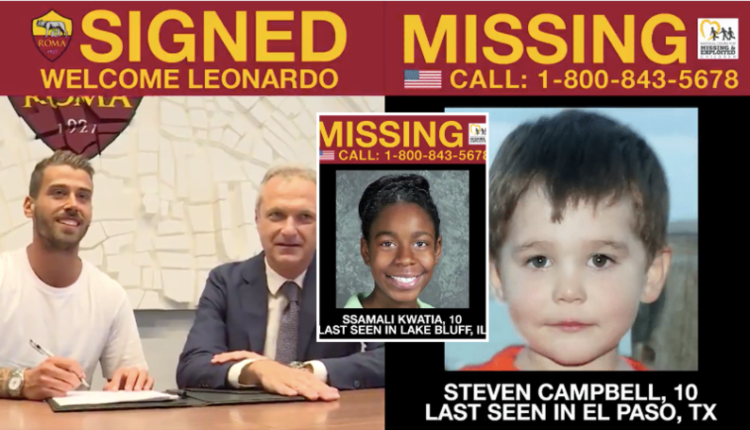 In recent years Roma’s transfer announcement videos have proven to be huge hits on social media. They have entertained us and made us laugh.

However, the club have announced they will now use their online reach to raise awareness of missing children.

The Serie A club have joined forces with the charities National Center for Missing and Exploited Children in the United States and Telefono Azzurro in Italy.

Each time Roma complete a signing, they will include photos of missing children in their their announcement posts.

The appeal was launched on Sunday with midfielder Leonardo Spinazzola’s transfer to the Serie A side.

The summer initiative is inspired by rock band Soul Asylum’s music video for their 1992 song Runaway Train, which highlighted the faces and names of missing children, similar to those printed on millions of milk cartons in the USA during the 1980s and 90s.

“We want to use the viral nature of social media transfer announcements to help raise awareness for missing children,” said Paul Rogers, head of strategy at Roma.

“We have a massive social media following and our announcements generate incredible reach and awareness, all over the world, so we thought that at the exact moment when the world’s attention is on the club’s announcement.”

Roma are also in talks with a British charity about providing information on more missing children across Europe.

NCMEC, founded in 1984, helps to deter child exploitation and child abductions in the US while Telefono Azzurro, which was formed in 1987, operates around the clock to support abused and at-risk children.