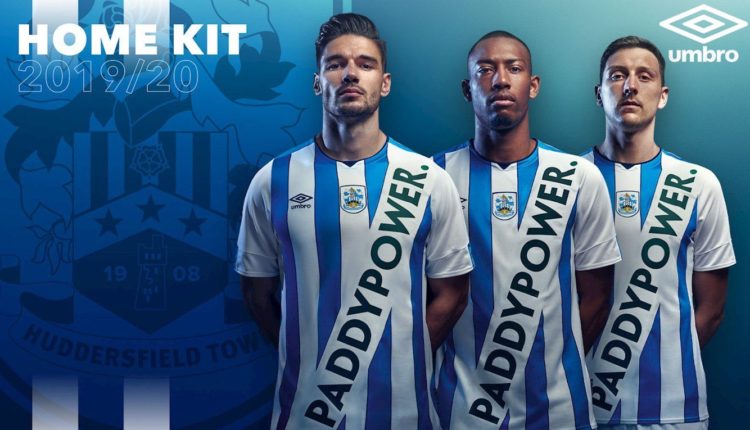 Huddersfield have been contacted by the Football Association about the sponsor’s logo on their new kit, which will feature for the 2019-20 season.

The Terriers revealed the shirt on Wednesday and wore it in their friendly with Rochdale that evening.

But it appears to breach FA guidelines on shirt sponsorship, raising the possibility of it being banned.

The FA has asked Huddersfield for their observations about the kit.

? #htafc's new home kit for the upcoming 2019/20 season has today been revealed!

“The FA has clear kit and advertising regulations for all club matchday kits,” the FA said in a statement.

“If we believe that any club has breached these rules we will look into the matter and, if required, will take the appropriate action.”

FA regulations clearly state a playing kit is only permitted to have “one single area not exceeding 250 square centimetres on the front of the shirt”.

Huddersfield have said it will be their home kit for the upcoming season and confirmed it will go on sale on Saturday.

The club’s shirt sponsor Paddy Power has not responded to questions on whether the kit is a spoof or may breach regulations, and referred instead to its own statement.

“We’re delighted to work with Huddersfield Town on this bold new kit design,” it said.

⚽️ Here's the new home kit that #htafc will wear in this evening's pre-season game against @officiallydale.

? The kit goes on sale at @htafcmegastore this coming Saturday, 20 July 2019. pic.twitter.com/VZA2OKoXMl

The club said the kit was a “modern spin” on the traditional blue and white striped home shirt.

However, fans on Twitter have reacted by asking when “the real kit” will be unveiled.

One supporter said “You’d think it was difficult to make a mess of blue and white stripes” while another likened it to a beauty pageant sash.

Lampard has the last laugh as Chelsea beat Mourinho’s Spurs