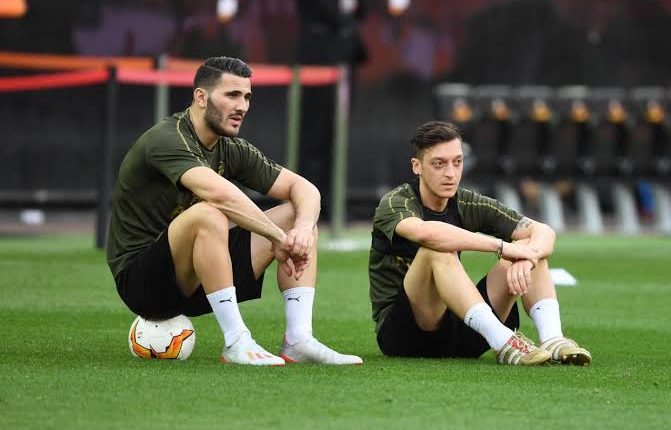 Ozil was driving his black Mercades G Class 4×4 near Golders Green Road when he was boxed in by scooter-gang armed with knives.

Ozil then fled his car to take shelter in a nearby Turkish resturaunt called Likya, while Kolasinac, seated in the passenger’s seat, appeared to get out and drive away the attackers.

A video that has surfaced on social media of the incident appears to show Bosnia-Herzegovina international Kolasinac scuffle with one helmet-clad assailant and then, as the car pulls away, he charges another.

Footage has emerged of Sead Kolasinac fighting off a pair of knife-wielding attackers during an attempted robbery, Mesut Ozil was also involved in the incident.

Arsenal have confirmed both players were unharmed.

The remainder of the assailants fled empty-handed after staff from the resturaunt came to the aid of Ozil and Kolasinac.

Police soon arrived at the scene, blocking off the road to search for the assailants.

Both players avoided injury and did not need medical treatment.

“We have been in contact with both players and they are fine.”Arsenal said in a statement.

The Arsenal duo both provided statements to police, and then departed the scene.

Police also confirmed an incident with assailants on motorbikes had occurred, though they have yet to make any arrests in the case.

The statement from the Metropolitan police said: “Police were called to Platts Lane, NW3, shortly before 5pm on Thursday, July 25 to reports of an attempted robbery.

“It was reported that suspects on motorbikes had attempted to rob a man who was driving a car.

“The driver, along with his passenger, managed to get away unharmed and travelled to a restaurant in Golders Green, where they were spoken to by officers.

“There have been no arrests. Enquiries continue.”

Ozil and Kolasinac only recently returned to London, having both been involved in Arsenal’s pre-season tour of the United States, which concluded on Tuesday.

There have been no arrests so far.
Kolasinac and midfielder Ozil are not the first footballers to be targeted on London’s roads.

In 2016, then West Ham striker Andy Carroll was threatened at gunpoint on his way home from training.