Lionel Scaloni’s Argentina Marched into the final by beating Croatia 3-0 in the semi-finals. Argentina, Defending Copa America champions came to the world cup with 36 matches unbeaten and faced Saudi Arabia, Mexico, and Poland in the group stage and Australia, Netherlands, and Croatia in the Knockout stages. Argentina’s road to the final journey was like a rollercoaster ride with lots of ups and downs but all the credit to the manager Scaloni who played with his brain. Scaloni tried different formations with different combinations of players in every game which led to a great result.

Argentina came to the World Cup as everyone’s Nightmare but their nightmare was Saudi Arabia and Herve Renard. Argentina’s world cup start wasn’t that great, They lost to the 51st-ranked country. Can’t lie Saudi Arabia outperformed Argentina in the first match with just 0.1 Xg as Argentina had 2.2 xG. Argentina’s 4-4-2 against Saudi’s 4-3-3 wasn’t helpful at all. Renard played Highline defence with Saudi Arabia which worked well and caught Argentina 10 times offside and 3 of them could have led to a goal. 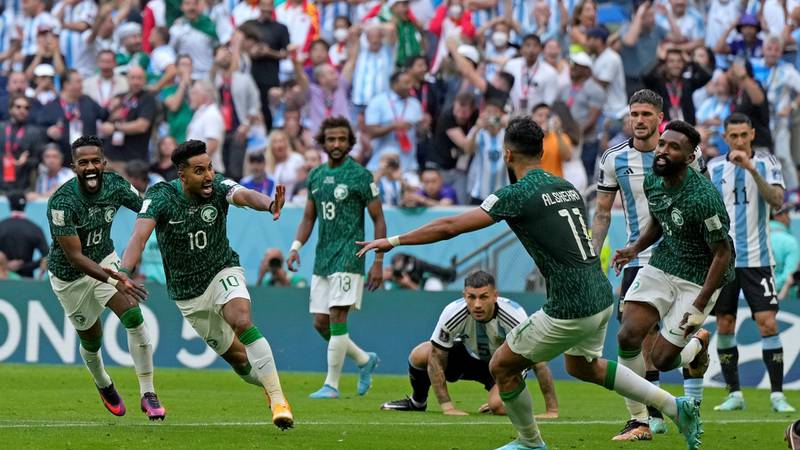 They played Lautaro Martinez and Messi up front with Di Maria and Papu Gomez in the wing which didn’t work well as Di Maria always tended to move to the right corner and played crosses. Argentina tried for 23 crosses and most of them didn’t connect. Gomez and Lautaro were not in good form in that match. Argentina’s only goal came from Messi’s penalty.

After Saudi ended Argentina’s unbeaten run, Argentina faced Mexico in the next group-stage match which ended in favour of Argentina. They won 2-0 with both teams having an xG of 0.3. 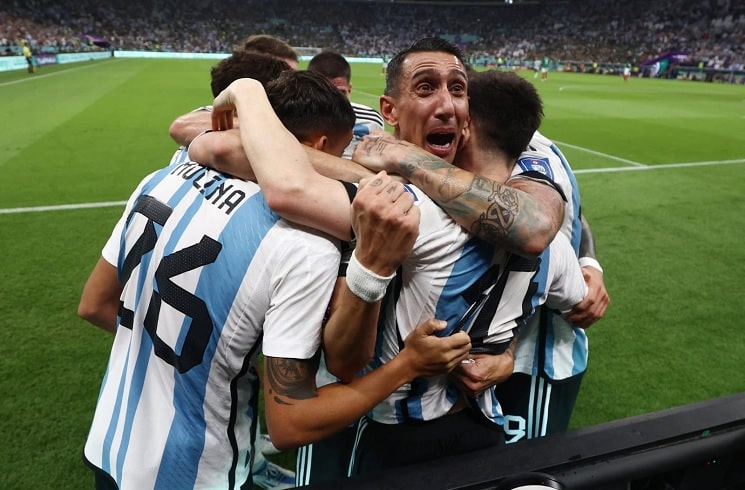 A big void in the middle was one of the reasons for Argentina’s loss, So Scaloni picked Mac Allister to fill Locelso’s space in the midfield which eventually went well. Argentina played 4-3-2-1 with Lautaro as the lone striker against the 3-5-2 Mexican side. Acuna started ahead of Tagliafico and Montiel ahead of Molina which increased the pace of the game. Messi and Dimaria played as attacking mid which helped them to gain control over the Mexican midfield.

Messi scored his second goal of the tournament in the match and later substitute Enzo Fernandez scored a screamer to finish the game.

It was a do-or-die game for Argentina where they faced Poland in the last group stage match. Out of form, Lautaro was replaced by Julian Alvarez in the match and Argentina played 4-3-1-2 against Poland’s 4-4-2 with Alvarez and Di Maria up front and Messi as AM. Messi helped the midfield and attack which helped Argentina to dominate the match. Argentina’s Xg was 3.6 while Poland’s was just 0.3. 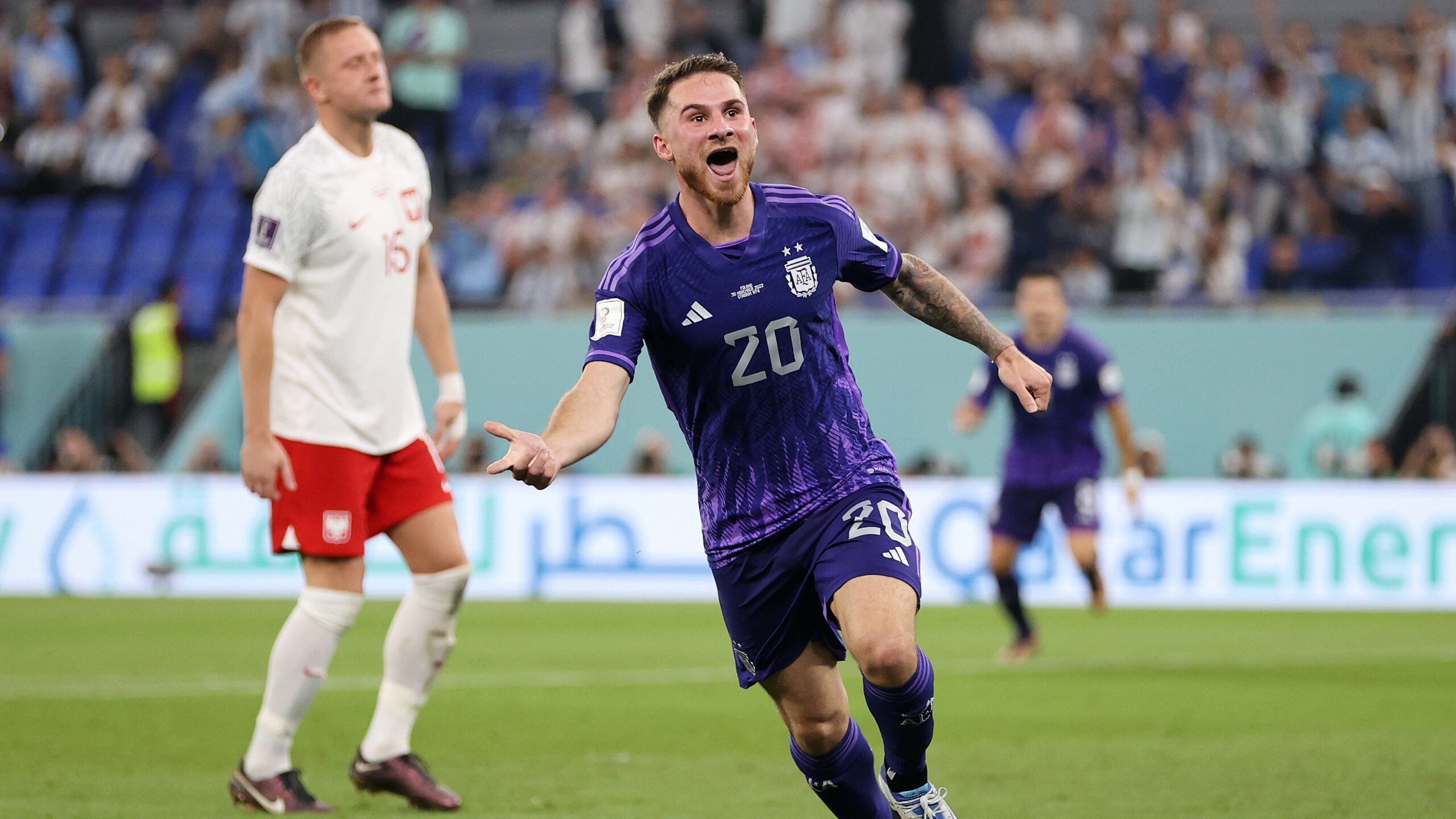 Messi’s penalty miss in the first half was the only highlight of the half and Mac Allister and Alvarez scored in the second half to win the match and Argentina qualified for Knockouts as group champions. Scaloni’s experiments in pairing full-backs have worked out finally as the new pair Acuna and Molina started the match and played well. Goal scorer against Mexico, Enzo Fernandes was also included in the starting XI with Mac Allister and De Paul.

Match 4 – Argentina vs Australia, Round of 16

Lionel Messi’s 1000th game in his career as Argentina faces Australia in the round of 16. It was not an easy game for Argentina as everyone thought. Scaloni played 4-3-3 for the first time in the world cup with Papu Gomez replacing injured Di Maria. Gomez – Alvarez – Messi trio played up front against Australia’s defensive 4-4-1-1 formation and took control up front. 1.6 and 0.6 were Argentina’s and Australia’s Xgs during the match.

Messi scored his third goal of the tournament and Alvarez continued his scoring. Argentina slowed the game after their two-goal lead which helped Australia to get the upper hand in the last 20 minutes. Scaloni changed formation to 3-5-2 replacing out-of-form Gomez with Lisandro. 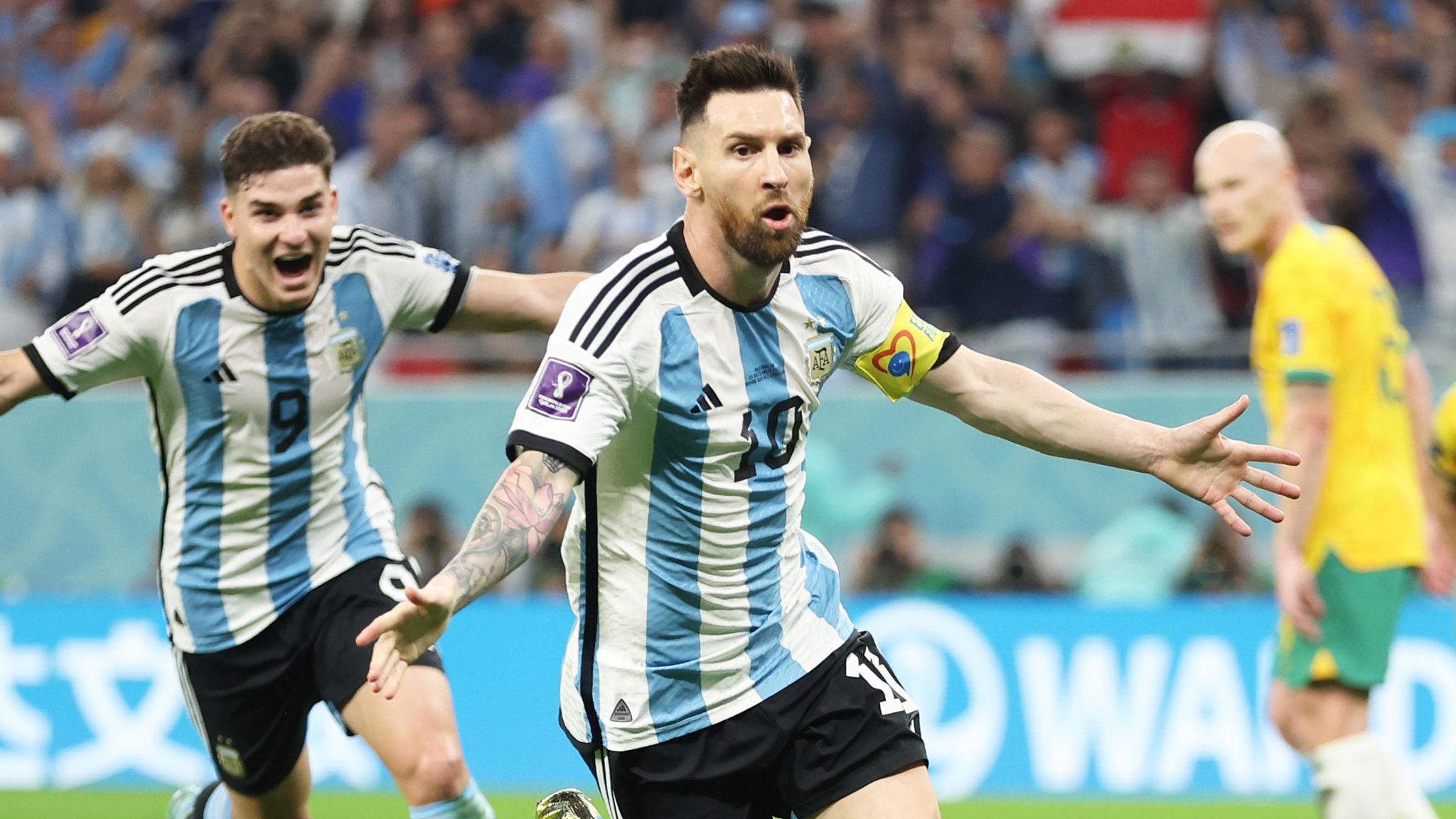 The last 20 minutes were chaotic and Australia managed to score a goal and showed some attacking display. Lisandro’s cameo with a great tackle and Emi with a last-minute save helped Argentina to win the match.

One of the toughest games for Argentina in the world cup. The Netherlands in form and speedy attackers and box-to-box wingers were the main tasks in front of Argentina. Scaloni chooses to play 3-5-2 against Netherland’s 3-4-1-2. The 3-man defence of Argentina helped to nullify the pacy attack of the Dutch side and Argentine full-backs Acuna and Molina tracked Netherland’s full-backs.

Cards, cards, and more cards… This was the summary of the match, 48 fouls were in the match and 17 yellows were shown. The match was end to end but Argentina took an early lead with Molina’s goal in the 35th minute and Messi’s penalty in the 73rd minute. Wout Weghorst came as a sub and scored twice to equalize the score and then the match went to penalties.

The game ended with Xg 0.5 to Netherlands and 1.9 Xg to Argentina side and ended with a penalty score line 3-4 in Argentina’s favour. Emi Martinez with 2 penalty saves was the star of the match.

4-4-2 was the formation Scaloni chose to play against Croatia’s world-class midfield. Argentina crowded the midfield to take control over Modric, Kovacic, and Brozovic. Initially, the Croatian midfielders took control of the game but eventually it changed.

Argentina won the game with a score line 3-0 with an xG of 2.5 to 0.5 of Croatia. The suspension of Acuna wasn’t a problem for Argentina as Tagliafico played well in that position. Julian Alvarez scored two goals and won a penalty in the match with Messi’s masterclass on the ground. Both of them helped Argentina to march to the final. 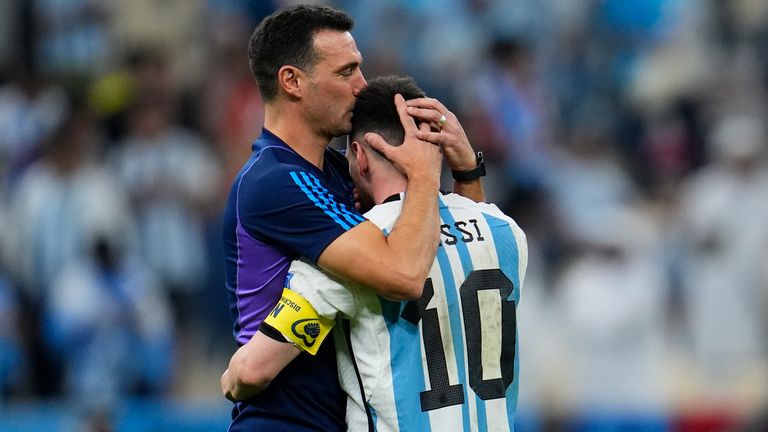 Lionel Scaloni’s masterclass tactics are the only reason that Argentina is now going to play in the Finals. He used different tactics for different opponents and won the game except for the first game dominantly.

Series Of Flabbergast Continues In Qatar; Can Portugal And England Make It To The…