Manchester City made a flying start to their Premier League title defence as Raheem Sterling’s hat-trick inspired a 5-0 demolition of West Ham on Saturday.

Pep Guardiola’s side are bidding to become just the second club in the Premier League era to win three successive titles.

And after Liverpool laid down an early marker with a 4-1 win against Norwich in the season’s opening game on Friday, the champions responded with a swaggering display of their own at the London Stadium.

Brazil forward Gabriel Jesus opened the scoring to repay Guardiola’s faith after the City manager picked him instead of the club’s record goalscorer Sergio Aguero.

Then Sterling took over, replicating his dynamic form of last season with a two classy finishes.

bro why is this VAR ting so mad at meee ?? still happy with the three goals & moreover with a great victory to start the new season… Let the race begin ?? @ManCity pic.twitter.com/P02J5K7A1K

Substitute Aguero bagged City’s fourth with a penalty after his first effort from the spot was saved, only for VAR to call for a retake after Lukasz Fabianski came off his line too soon.

Sterling wrapped up his treble in the final moments as City showed they have no intention of conceding any early ground to European champions Liverpool, who finished just one point behind them last term.

Guardiola had admitted before kick-off that City might have to do even better than last season to fend off Liverpool.

This was the perfect start as City made it nine successive opening-day wins.

City had won all four of their previous visits to the London Stadium by an aggregate score of 17-1, netting at least four goals in each match, and once again they ran riot at West Ham’s expense.

Guardiola handed a first Premier League start to club-record signing Rodri and the Spain midfielder showed signs of nerves when he allowed Manuel Lanzini to rob him in his own penalty area.

But it was a rare stumble from City’s impressive new boy and the champions were soon into their stride.

Riyad Mahrez, surprisingly selected ahead of Bernardo Silva, produced City’s first menacing moment when the Algeria winger cut in from the right flank for a long-range strike that Fabianski pushed away.

When City’s opening goal came in the 25th minute, it was the kind of incisive raid that has left so many opponents helpless over the last two years.

VAR takes the Centre Stage
Mahrez slipped a perfectly-weighted pass to Kyle Walker and the right-back accelerated away from Aaron Cresswell.

Walker whipped over a cross that deflected off West Ham defender Issa Diop into the path of Jesus and he instinctively turned the ball past Fabianski from close range.

Jesus should have doubled City’s lead but he shot straight at Fabianski on the stroke of half-time.

There was no need for City to rue that miss as they struck six minutes after the interval.

Kevin De Bruyne was the catalyst, the Belgian midfielder showing what City missed during his long injury lay-offs last season as he left several West Ham players trailing in his wake before making a precise pass that set up Sterling’s clinical finish. 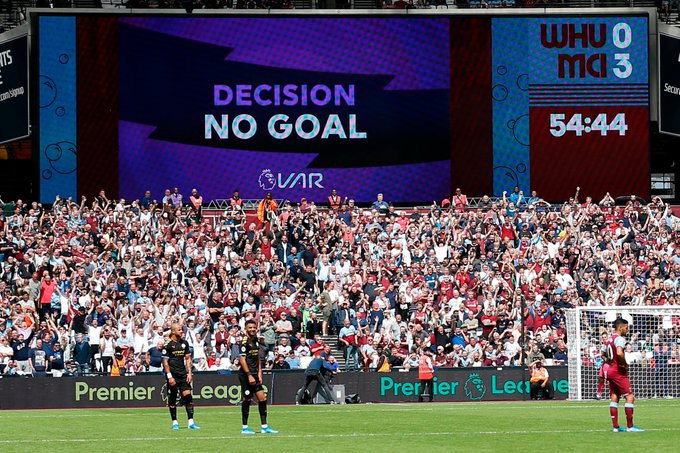 City were denied a third goal when Jesus’s tap-in from Sterling’s cross became the first goal to be disallowed by VAR in the Premier League for an extremely marginal offside against the England winger.

A brilliant double save from Ederson denied Javier Hernandez and Manuel Lanzini before Sterling put the result beyond doubt in the 75th minute.

Mahrez clipped a pass to Sterling and he turned to loft a delicate chip over Fabianski, with City this time able to celebrate after another VAR review for offside.

VAR is being used in the Premier League for the first time this season and its constant interruptions aided City in the 86th minute.

Mahrez won a penalty after being fouled by Diop, but Aguero’s initial shot was saved by Fabianski before VAR called for a retake that the Argentine stroked home.