Can Juventus salvage the season at the expense of Sloppy Milan?

For more than half of the season, AC Milan was on top of Italian Serie A with a comfortable position to lift the domestic title after several years.

However, going to the final week of the season, the most decorated team of Italy is on a do-or-die struggle to keep their hopes of returning to Europe’s elite football since 2013-14.

On the run, Inter Milan, their neighbors, won the Scudetto in emphatic style while four teams are fighting it out for the remaining three European berths.

The Rossoneri had themselves as their greatest enemies as they complicated their passage to the Champions League with a goalless draw at home against bottom side Cagliari on Sunday.

A victory could have eased the pressure and paved the way for a smooth passage to Europe, where they reigned seven times, subordinate to only Real Madrid.

“We were too tense,” said Milan coach Pioli. “We had the game of a lifetime against Juventus, then Torino, so it will be another against Atalanta. We will have to try.” The boss Stefano Pioli told about his team’s chances of progress.

High flying Atalanta almost sealed their third season of Champions League football in a row with an epic 4-3 win over Genoa on Saturday.

They sit comfortably on the second spot with 78 points and better goal difference.

Milan are third, equal on 76 points with fourth-placed Napoli, who won 2-0 at Fiorentina earlier on Sunday.

Andrei Pirlo’s Juventus had a Milanesque inconsistent run, but they showed great mentality by defeating champions Inter 3-2 while playing with 10 men for most of the second half to go to the final week with added confidence.

The Italian champions for nine consecutive years, Juve are on a path to go to the Europa until and unless either Milan or Napoli fail to win their final match. 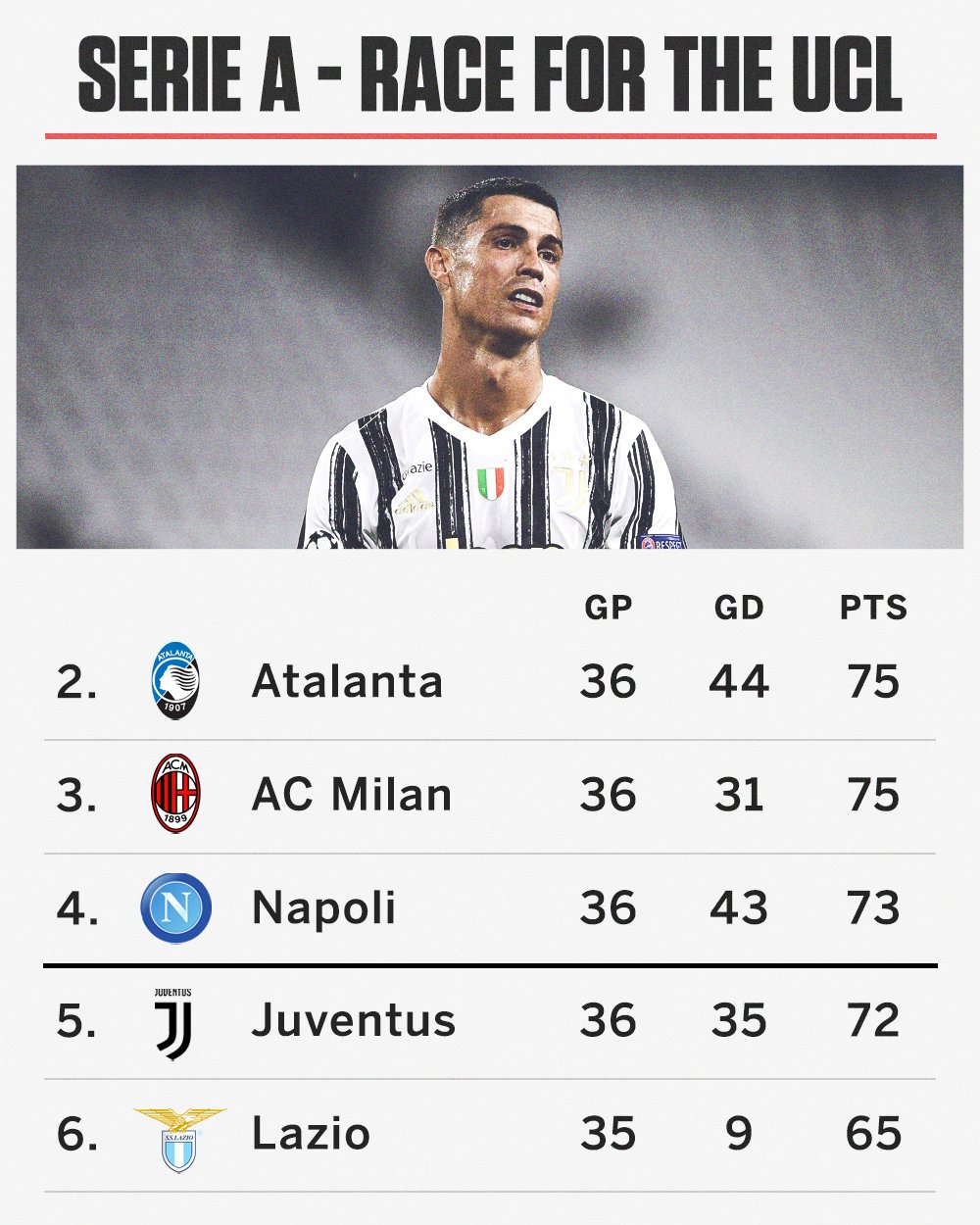 They had brought Cristiano Ronaldo to conquer the Europe but now in fact are on the verge of losing the entire territory under their player turned manager Pirlo.

Will the plight of Milan prove to be the last straw for rivals Juve to salvage their error stricken season?

The writing on the wall says that Milan will struggle as they have to take on Atlanta away from home while the Old Lady has a relatively easy opponent Bologna in the final game on Sunday.

Poor home form has costed Milan dearly as they could register only eight wins out of 19 games played in the San Siro.

Just before the game against the Sardinians, Milan looked have found their most lethal form as they thrashed Torino 7-0 in the midweek.

Gannaro Guettuso, the manager of Napoli who was sacked by Milan after leading them to a fifth place finish in 2019 will have a moment of pride if his previous team miss out of the Champions League because of his current team.

Napoli will face tenth placed Verona in the final gameweek as the under fire Gattuso has to win this game at any cost if he has to keep his position in Naples.

So the upcoming Sunday will be one of the most exciting final weeks in Italian top flight ever. Let’s wait and see whether Milan will survive the Atalanta scare or Pirlo will have a decent farewell at Turin.