Çarşı and the Politics of Turkish Football

“You don’t choose to support a club, you are born into a family that supports a club, and you dare not go against it.” What sounds like a joke is actually the reality of many in Turkey. Parallely, it is also true that “Even if you don’t follow football, you still have a club.”

Turkey proudly presents its passion for football that extends beyond the game itself. It has to do with how the masses of fans connect the sport with disparate streams of origins and beliefs, especially the political varieties. When you look at Turkish football, it is impossible to miss the Istanbul hegemony in it, thanks to Üç Büyükler or, The Big Three: Beşiktaş JK, Fenerbahçe SK and Galatasaray SK, the three most successful football clubs based out of the region, who have never been relegated from the Süper Lig.

The fans of Beşiktaş, refer to themselves as the club of the commoners, as opposed to Galatasaray, who are known as the club of the elites, having formed by the members of the Galatasaray High School, and till this date, you need to graduate from the school (or have a membership pass granted by the current members) to become a member yourself.

Therefore, unlike in English football, where the rivalries are regional, the fans of Turkish clubs see a social hierarchy in the clubs they support. The hierarchy persists due to the religious, ethnic, regional and political causes behind the formation of certain clubs, as well.

Fenerbahçe and Galatasaray of Istanbul play against each other in the Kıtalararası Derbi (literally: Intercontinental Derby), which in Turkish is often referred to as Ezelî Rekabet meaning ‘Eternal Rivalry’. The Turkish Üç Büyükler, thus, have a tradition of passion and fan feuds that has spanned over generations, and it is common for the clubs’ supporters to have triggered each other’s sentiments before, during, and after the game, leading to various accounts of violence among the fans.

While club rivalries are a common affair in any game, the Turkish government used “growing violence inside football stadiums” as an excuse to implement an e-ticketing system across the country, called Passolig. The Passolig system made it compulsory for anyone (including tourists) who wishes to watch a live match of the top two divisions of the Turkish competition in a stadium to have a Passolig card, to which the ticket they buy online would be transferred, thereby eliminating paper tickets altogether.

Passolig also categorizes the buyers of the card with respect to the clubs they follow, and doesn’t allow two fans of separate clubs to purchase tickets together, making it impossible for a heterogeneous group (of friends) to be seated together at a match.

The government claims that the system eliminates the tendency to create violence amongst the fans in stadiums as well as does away with the common practice of selling tickets in the black market.

‘Passolig Card allows fans and their families to safely enter stadiums and enjoy matches peacefully without any stress!

Not only financially beneficial, Turkish football will maximize safety and security in the stands with Passolig Card, leaving all the negativity in the past. This card will bring significant new advantages to the clubs and their fans.’

Passolig is originally a trademark owned by a bank, called Aktifbank, whose parent organisation Çalık Holding had the Turkish President Recep Tayyip Erdoğan’s son in law as its CEO when the e-ticketing system was first established in 2014. Passolig is backed by the law 6222 which was approved by the Turkish parliament in April 2011, to ‘Prevent Violence and Disorder in Sports Arenas’.

While the system initially claimed to only ask for the citizen’s ID card number, once implemented, it asked for occupation, family status, and address of residence among other personal details of the fans- all for attending a game of football.

The system is considered a huge invasion of privacy, and the fans hold the position that the 6222 law, and Passolig were implemented to criminalize anyone who protested against the commercialization of the game in the country. Once Passolig was established, stadiums across the county saw the installation of high-definition cameras that made face-recognition possible to help the government in identifying the “trouble-makers” in the arenas.

The introduction of the system saw a huge fall in match attendance in the stadiums across the country, with about a 90% drop in the audience that favoured the top three. A major reason behind this is the collective and conscious decision taken by the fans of the clubs to boycott the matches in stadiums until Passolig persists.

In between the politics of it all persists the plight of the common football fan. The spirited supporters who never missed a live match in the past are now limited to the seats in front of their televisions. To re-create the enigmatic gush of passion that a fan only felt amongst several of them in the stadium, the followers of almost all clubs in Turkey took to their terraces. They shout, howl, and chant praises for their clubs while simultaneously taking a stance against the government and the state-implemented Passolig. The fans know this is impactful, and that people in their terraces scares the government, especially since the opposition party of Turkey joined the fans in on the terraces, in solidarity.

Group Yalı, the fans of the club Göztepe S.K. which competed in the third division of the Turkish football before making a comeback to the second division in the 2015-16 season and finally to the Süper Lig itself in 2017-18 lamented over their promotion as it meant they wouldn’t be able to witness live matches once the team ascended to the second or first divisions of the game. The fans of the club have their own version of the Italian revolutionary song ‘Bella ciao’ and chants like ‘Alayına isyan bitmez’- “The rebellion against the regiment never ends” to constantly express their dissent towards the actions of the government and its politicization of the game for commercial benefits.

Similarly, fans of the club Gençlerbirliği S.K. who call themselves KaraKızıl also boycotted the stadiums after Passolig was established, and took their spirit for the game to their own terraces, and bars dedicated to their clubs. They believe that the e-ticketing system takes away the basic right of the fans, and by shifting their club activities outside the stadium, they ensure that their passion continues, but in their own terms.

The loudest voice of dissent against Passolig, however, came from Çarşı, an organised fan group of Beşiktaş, who pride themselves in having taken the lead in major political developments and anti-government protests the country has seen.

Founded in 1982, the name of the fan group, ‘Çarşı’ comes from the 1980s practice of Beşiktaş J.K. fans hanging out in the marketplace outside their home stadium in the Beşiktaş district. The bazaar came to be associated with the fans of the club and thus, when the fan group was formed they named themselves ‘Çarşı’ which in Turkish means ‘marketplace’ or ‘bazar’.

Although the club-rivalries are as strong as ever, the fans of Turkish club football often find a leader in Çarşı. This ascend to “leadership” occurred after the Gezi Park protests of 2013, when what began as a peaceful sit-in protest by common people against the demolition of the Taksim Gezi Park in Istanbul turned into a massive series of protests against the government, leading to 22 deaths and over 8000 injuries nationwide.

For the longest time, the Çarşı, a group of working-class, social-minded, anti-racist, anti-sexist, anti-fascist, pluralist and ecologist fans of Beşiktaş used the stadiums as their platform of expression- for solidarity and dissent. When the protests of Gezi Park saw an acceleration in the process of silencing the protesters (using water-canons, tear gas, pepper spray), on the night of 2nd June 2013, Çarşı hotwired a bulldozer parked outside their then home İnönü Stadium, causing the police and their water cannons to retreat.

Under Erdoğan, the fans feel that the country is taking a down path in democracy. As of 2014, more than 6000 people were charged with 97 different trials, as a consequence to their protests against the government in the Gezi park protests of whom several were members of Çarşı, booked on the grounds of “Conspiring to overthrow the government”. They went on to receive support from many social and political organizations, including the fans of their rival clubs. 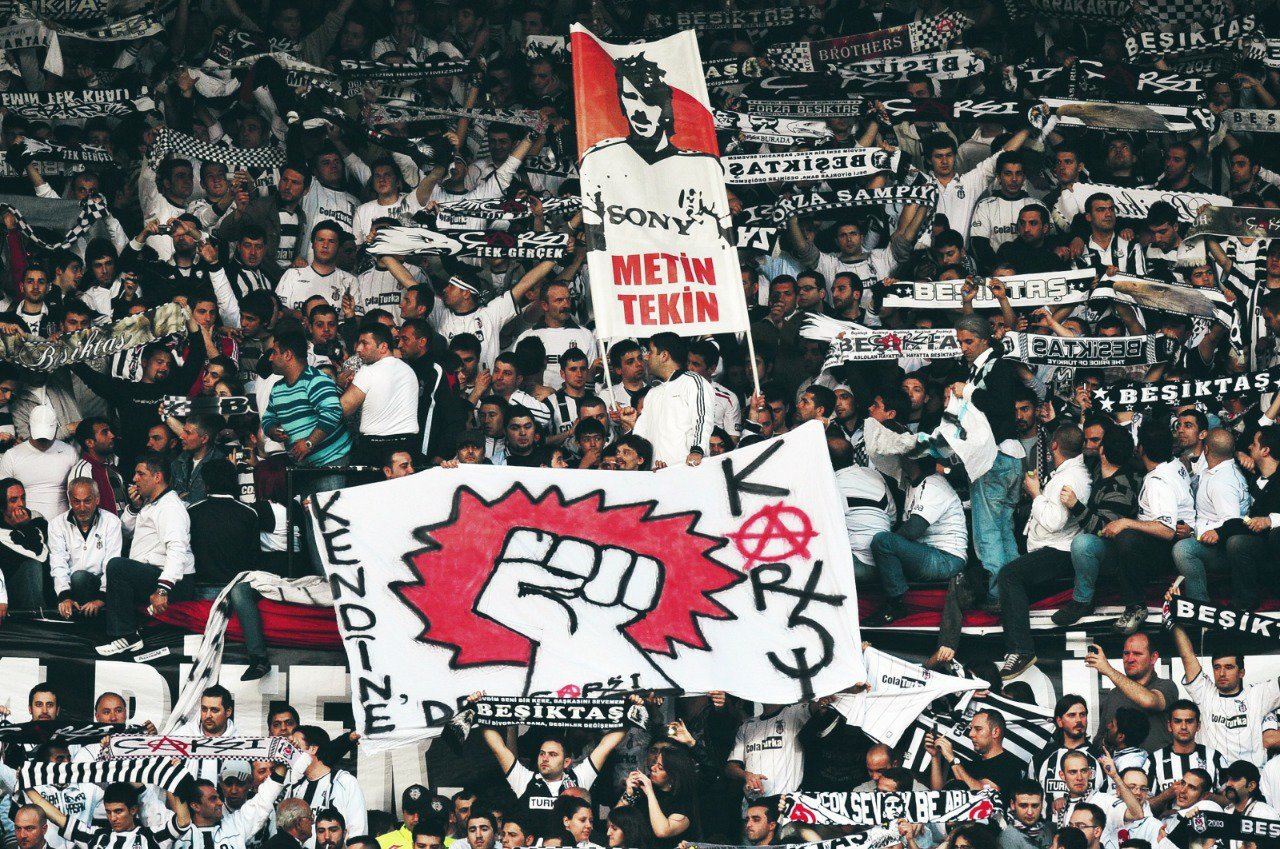 “The Black Eagles (called so because of the white and black colours Beşiktaş play in) themselves have a rebellious spirit”, say the fans, “and we are a part of the rebellion.” Due to the same reason, the club has also proved to be first choice for receiving support from minorities such as the Kurds and the Alevis.

While Çarşı has acted as a mobilizing force against the Erdoğan government, they claim to be an independent group of fans who have the best interest for the people, having neither a political orientation nor an agenda. However, they affirm that they are politically aware, as required. In 2013, members of Çarşı told VICE, “We don’t have a political stance, we’re not affiliated with any political parties; our stance is being Beşiktaşlı- we protect the oppressed, the ones who need their voices heard. We support the youth, we endeavour to shift to a more modern democracy, to a stronger democracy.”

Politics and football are intertwined in Turkey, so Çarşı believes football can be a space for expressing dissent, an action that is synonymous with terrorism for their government.

Çarşı’s mobilizing actions during the 2013 protests was a proud moment for all football fans in Turkey, and several fan groups of clubs across the country have expressed that it has led to a more empathetic flow of emotion among the fans of the game, irrespective of the clubs they follow. Rivalries are secondary, football comes first.

They see themselves as an abstract notion rather than a football fan group. A definition the various fans of the club have related with over the years.

“Çarşı is against everything!” echoes every time a band of Beşiktaş fans assemble.