UEFA have announced their best 18-man squad from the 2018/19 Europa League campaign – and the list features eight Chelsea players and three Arsenal stars.

The two London giants contested this season’s final in Baku, with Maurizio Sarri’s men running out 4-1 winners against Unai Emery’s side, earning the Blues’ second Europa League title in six years and denying the Gunners the chance of playing Champions League football next term.

Jorginho has drawn a lot of criticism during his first season in the Premier League after arriving from Napoli last summer with Maurizio Sarri, but the midfielder was a key performer in the Blues’ Europa League run and is also featured on the 18-man selection.

Meanwhile, the Gunners’ impressive run to the final saw them overcome the likes of Napoli and Valencia en route to the final, and their performances have not gone unnoticed by UEFA.

Defenders Laurent Koscielny and Sead Kolasinac were virtual ever-presents in Emery’s side in the latter stages of the competition, and both are included in the 18-man selection, along with star striker Pierre-Emerick Aubameyang, who was the third top scorer in the tournament.

Elsewhere, Eintracht Frankfurt emerged as the surprise package of this season’s Europa League, and their run to the semi-finals has seen five players from the Bundesliga side named on the list, including Real Madrid-bound striker Luka Jovic, along with two Benfica players. 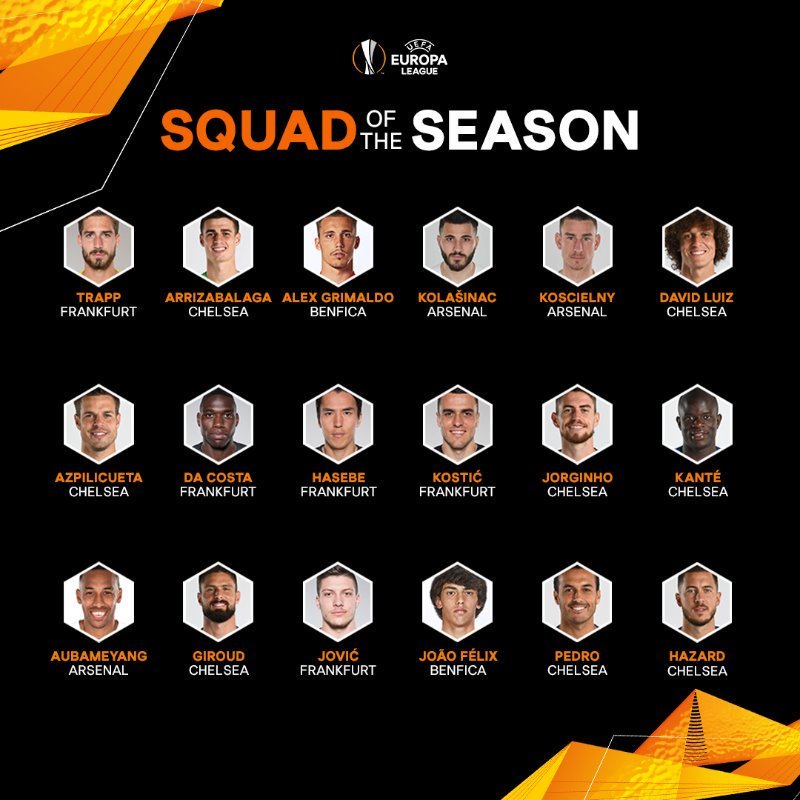