The St. Bernard and the Pub Owner: The Story of Manchester United Through the Ages

The world knows Manchester United as the Red Devils who dominated the English Premier League and housed the biggest footballing names of not just England, but the whole world. But to become the giants of Europe that we are familiar with, they had to start small from the railway lanes of the city.

Manchester thrived during the Industrial Revolution, and its people had a certain love for sports that transferred into the passion we witness till date in the realms of cricket and football alike. Hence the club that came out of the city was intended to be for both the sports and its initial name represented the same. They weren’t always the Red Devils they are known as today. The railway workers of Manchester played the beautiful game in green and gold, instead of the red and white we are accustomed to seeing them in.

Newton Heath L&YR Cricket and Football Club, which would later become Manchester United FC was founded in 1878. The L&YR in the name stood for Lancashire and Yorkshire Railway which was the name of the company where the players of the team worked. The players were given time off work to play matches and they were hosted in local pubs, where they changed and prepped before the matches. 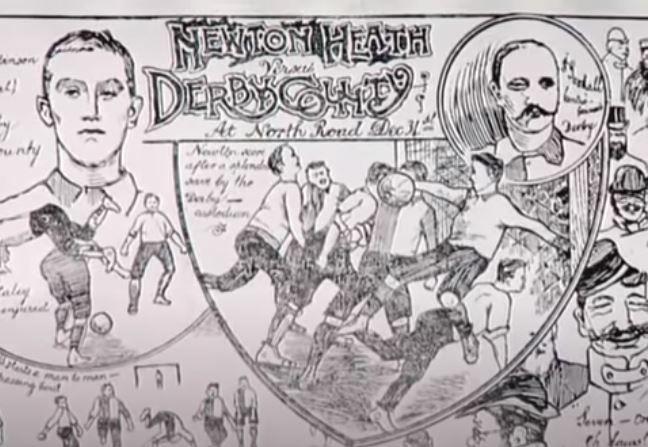 1886 saw the team win their first trophy- The Manchester Cup. It was William McGregor from Aston Villa who proposed the idea for a football league. However, Newton Heath didn’t find a place in the original 12 participants of the English league and only made it to the second division- The Football Alliance.

It was then that they took away the reference to the railways from their name and employed their first full-time official- Secretary AH Albert. Initial years in the Football League were difficult, but 15th October 1892 saw a spirited Newton Heath defeating the Wolverhampton Wanderers 10-1 at North Road, Manchester, their home.

The team produced memorabilia in the form of sketches on postcards, there wasn’t much demand for them in those days because Newton Heath was on the brink of relegation. The final decade of the 19th century bode nothing less than a nightmare for the club, having slipped into the 2nd division with the risk of being nudged into the third. The club also had to move from their home in the North Road to Bank Street when L&Y Railways handed them an eviction notice for the former, leading the club to an awful debt. 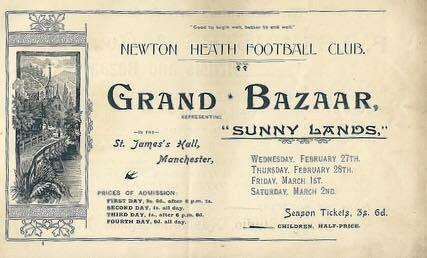 Thus, the turn of the century brought in more problems for Newton Heath as they got served with a winding-up notice, leading to a situation where they almost had to disband themselves. In order to avoid bankruptcy, the club needed to raise £2,670 (equivalent to £290,000 in 2020). In that framework of things, it had become common for the team captain Harry Stafford to attach a money collection-tin to his dog Major’s collar and send him in the streets. But when that wouldn’t suffice, the team organized a four-day fundraising bazaar at St. James’ Hall in Manchester city centre. The captain’s beloved Saint Bernard got lost among the crowd that collected for the event and couldn’t be found anywhere despite thorough efforts of the search parties Stafford employed.

Four days later, Major was found in a brewery, having made friends with the owner of the place Mr John Henry Davies. Upon inquiry, Stafford understood that Davies preferred to keep Major as a gift for his daughter, and sensed an opportunity. The two men struck a deal over the dog they both loved: Davies could keep Major as long as he agreed to fund Newton Heath.

JH Davies went from a man of the pub to being the owner of what would be one of football’s biggest clubs in history, all due to an adventurous Saint Bernard.

With several managerial alterations and infrastructural improvements under the new president JH Davies, 20th April 1902 saw Newton Heath transform into Manchester United FC. Charismatic players, dependable administration, and unconditional trust and support from the fans- this team had it all! 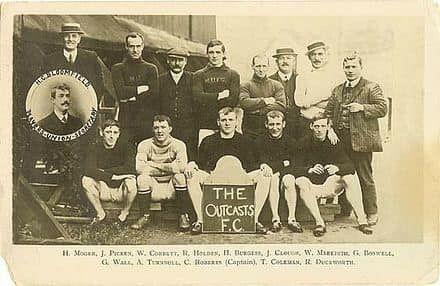 Setting a league record of points, Manchester United dominated the 1907-08 season but faced yet another hiccup before the beginning of the next season, as the footballers’ union members of the team were branded “Outcasts FC” for their protests against the FA, leading to several of United players being banned. A timely compromise led to the game season being unaffected by the politics of the association, as the players were re-instigated before the first match of the year.

The forthcoming year witnessed Manchester United shift to Old Trafford, a new home to the club- the very same Theatre of Dreams that we associate with the Reds today. However, on 11th March 1941 Trafford Park was heavily bombarded as per the instruction of Adolf Hitler, in what was called the Manchester Blitz- a series of bombings that hit North West England. It was carried out by the German Luftwaffe in retribution for Britain’s role in the Second World War. Old Trafford was wrecked and the Reds were left homeless. Manchester City stepped up, offering to help by sharing their home, Maine Road Stadium for United’s matches.

While United found a temporary abode, the following years saw several of their players signing up to fight in the war, leading to a strain in the squad to meet their fixtures. Given the situation, United, like many other clubs in those times, had to bring in “guest” players to just be able to play in the league. The club was in debt again, and it took them three more years after the end of the war to truly be up on their feet and fix the damages for good.

Under Sir Alex Ferguson, the club won 13 English league titles, as well as 25 additional silverware of both domestic and international nature. With Ferguson at the helm, the club saw its glory days and housed some of their best and most loyal players, who have stuck with them through the years: Gary Neville, Paul Scholes, David Beckham, Bobby Charlton, Ryan Giggs, Roy Keane, and the current boss Ole Gunnar Solskjær, among several others. It was truly a star-studded era for Manchester United. And of course, we owe it to Mr. Ferguson to have brought an 18-year-old Cristiano Ronaldo to English football.

Although United has been struggling since the Ferguson era came to an end in 2013, it is only fair to keep counting on the club that has come out on top of everything, from bankruptcy to wars, as the world watched them marching on, on, on.