Why shouldn’t I admire him?  My rationale struggles to find an answer.

Hansi-Dieter Flick! The big-name shall remain a nightmare for most of the Culers worldwide including me, at least for some more time. Undoubtedly, the year 2020 belongs to Hansi Flick in the footballing world. Who would have thought a man from Heidelberg in Germany was destined to unleash shockwaves across the serene coastal town of Catalonia on the night of 14th August  2020!

Yes, La Liga giants FC Barcelona were humbled by Flick’s Bayern Munich in UEFA Champions League quarter-finals at Lisbon with a humongous scoreline of 8-2. The always-bustling Barceloneta beach might have been shilly-shallied, unable to withstand the choking Catalonian atmosphere. The defeat had its own domino effect. It opened the Pandora’s box leading to an outbreak of dramatic events at Blaugrana – sacking of manager Quique Setien, relieving sporting director Eric Abidal, Lionel Messi dispatching a Burofax to leave the club, departure of Ivan Rakitic, Arturo Vidal, Nelson Semedo, Luiz Suarez, and the recent resignation of the entire board headed by infamous president Josep Maria Bartomeu. Hansi Flick’s operation Lisbon sealed Barcelona’s gradual decline from glory to the gutter and signalled an omen for a new beginning at Camp Nou. Danke, Flick!

Bayern Munich under Niko Kovac was limping in the Bundesliga towards the end of 2019, stationed at fourth in the point-table. Recurring inconsistent performances coerced Bayern to sack Niko Kovac in November. Snared in the middle of a highly competitive season, Bayern had no choice but turn towards Hansi Flick to take over the mantle for an interim period, who then was assistant manager under Kovac. It didn’t take long for Bayern to reincarnate in a new avatar. Bavarians ran a blitzkrieg whacking their opponents like a mighty Goliath. Everything Flick touched turned into gold. Bayern marched to glory clinching the Bundesliga title in a majestic fashion. It is with this rekindled vivacity and zest, Flick brought his team to face Barcelona at Estadio da Luz. Thanks to the vision of the board, Bayern boasted a terrifying squad depth with the likes of Alphonso Davies, Joshua Kimmich, Thiago Alcantra, Serge Gnabry, Thomas Muller and Robert Lewandowski adorning the field in a double pivot 4-2-3-1 formation. Flick’s style of play was characterized by man-to-man gegenpressing, popularized by Jurgen Klopp during his stint at Borussia Dortmund. 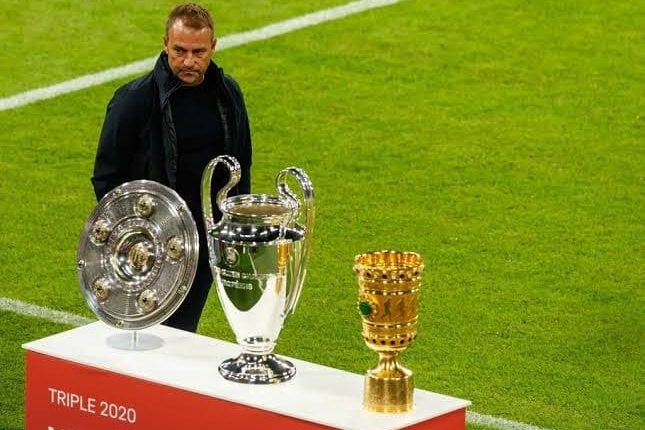 However, Flick added his own signature by enabling the team to quickly switch towards 4-4-2 whenever the pressure tactic failed to win back the ball and towards 4-3-3 when on the offensive mode in the opposite half.

Furthermore, the use of super high-line defence pulverized the opponents in their own half denying them space and time to construct the play. To my interest, I found Flick’s strategy bearing close resemblance with Persian warfare technique of Tulguhma – effectively utilized by Babur to win the first battle of Panipat. That aside, it is evident that Flick is adroit in discovering the highest potential of each player, which could be best-substantiated with the examples of Thomas Muller, Ivan Perisic and Philippe Coutinho. Muller was almost forsaken by Niko Kovac, a decision that Flick invalidated by passing the reins of attack to the German. Perisic and Coutinho on loan from Inter Milan and Barcelona respectively after a poor spell, resurrected under Flick’s system. Not only did they score against Barcelona but taught their parent clubs how to effectively use them on the field. What more! A quick glimpse through Lewandowski’s stats before and during Flick’s era says it all.

It was just a trailer to the ensuing show.

Flick guided Bayern to win UEFA Champions League by defeating Paris Saint Germain in the finals. There was enough room left on the Bayern’s shelf. Flick brought DFB Pokal, DFL Super Cup and the UEFA Super Cup to Allianz Arena thereby sealing off a season with quintuples. I would have construed Hansi Flick as a one-hit-wonder had I not realized an astounding truth. While innocently crediting Joachim Low with Germany’s world cup triumph in 2014, we often miss seeing the dexterous hands of Hansi Flick behind the tale of indomitable Germany.

It wasn’t surprising to see him with the UEFA Best Men’s Coach of the Year 2019-20 surpassing Jurgen Klopp and Julian Nagelsmann. For time being, Bayern’s chariot seems unstoppable with Flick as their charioteer.

Why shouldn’t I admire him?

My rationale struggles to find an answer.

This article is third in the series ‘Love Them, Hate Them, Can’t Ignore Them- What I admire most about my rivals’ by our readers. To get your perspective published, write to us at footytimes.com@gmail.com.

An addict who believes football is his drug with Messi being his primary dealer!