Harry Kane headed an equaliser six minutes into stoppage time to give Tottenham a thrilling draw in a London derby at Stamford Bridge that culminated in a heated altercation between Thomas Tuchel and Antonio Conte, resulting in red cards for both managers.

Marc Cucurella made his debut for Chelsea by assisting Kalidou Koulibaly‘s 19th-minute goal, which was scored off a corner kick taken by Cucurella. Koulibaly eluded his defender at the set piece before volleying the ball home.

All three of the Chelsea starters that made their home Premier League debuts today were directly involved in a goal against Tottenham:

After a brilliant buildup by Ruben Loftus-Cheek, Raheem Sterling nearly extended Chelsea’s advantage on the hour mark, but missed the target. Harry Kane immediately broke up the other end, but with only Edouard Mendy to beat, he missed the goal with his shot.

Eight minutes later, Spurs scored an equaliser under questionable conditions. Pierre-Emile Hojbjerg buried a low shot from outside the area into the bottom corner, triggering an altercation between Antonio Conte and Thomas Tuchel on the sidelines; both were subsequently cautioned. Tuchel was furious with referee Anthony Taylor for denying his team a free kick after Rodrigo Bentancur fouled Kai Havertz in the buildup.

🤩 @HKane has scored 42 goals in #PL London derby matches, the second most of any player after Thierry Henry (43)#CHETOT pic.twitter.com/O5RCFb1TzS

However, Chelsea regained the lead 13 minutes before the end of the game. Hugo Lloris was beaten by a shot by Reece James, who took advantage of Spurs’ uncovered left flank after Sterling’s pass. Tuchel ran down the sideline to celebrate what he believed to be his team’s game-winning goal just nine minutes after squaring off with Conte. 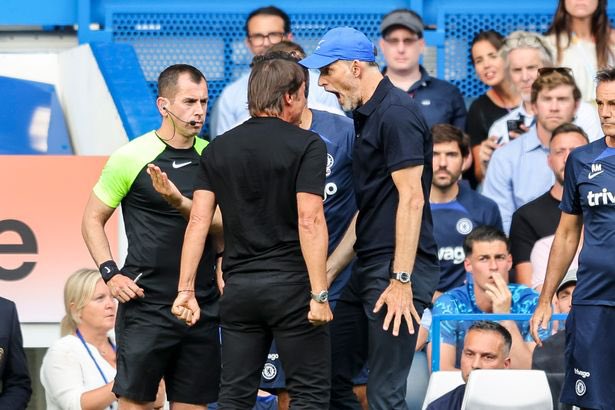 However, with only 30 seconds remaining, Kane scored a thrilling equaliser off a corner kick that deflected off James to ensure a draw. After the final whistle, there was another altercation between Tuchel and Conte, which resulted in a red card for each manager.

Tuchel was frustratingly disappointed with the result as he expressed it in the post-match interview.

“It would have been a huge win for us because the performance was absolutely brilliant, the way we played, how disciplined we played, but at the same time the intensity of the ball wins, the effort.”

The former Dortmund coach played down the questions regarding the red card and altercation and told it was common during competitive fixtures.

Meanwhile Spurs boss Conte didn’t comment on the incident and told his team deserved the point.

“I don’t want to comment on the [Tuchel] situation, this is not the most important thing. If there’s a problem, it’s between me and him. It’s normal to come here and to suffer but at the same time we created chances to stay in the game.” The Italian told Sky Sports.

Abdul Salam is a special correspondent of FT based in Nottingham, UK.