Ansu Fati, the 16 year old La Masia prodigy made it to the Barcelona first team last week from Barcelona B team and scored an incredible goal right in his second game for Barca when he scored a cheesy header soon after he came on to the pitch at the second half, against Osasuna on Saturday.

Ansu Fati of Guinea-Bissau became the youngest ever Barcelona player to score in #LaLiga with his brilliant header against Osasuna on Saturday. He beats out the likes of Bojan Krkic and Leo Messi to hold the prestigious record ? pic.twitter.com/bzJfUB29XM

“It’s always a great joy to see boys from La Masia enjoying and fulfilling their dreams, Congratulations on your record, Ansu !!” Bojan posted on social media.

Inter alia, he also holds the record being the third youngest scorer for any La Liga team in the pages of history marking his name high up in the history books of the Spanish top-flight. The assist came up from another La Masia superstar who made it to the La Liga first team side same as Ansu Fati; the 21 year old immensely promising youngster, Carles Perez when he crafted a perfect cross just outside the penalty box from the right hand side making it easier for the 16 year old to put it past the Osasuna goal keeper Ruben. 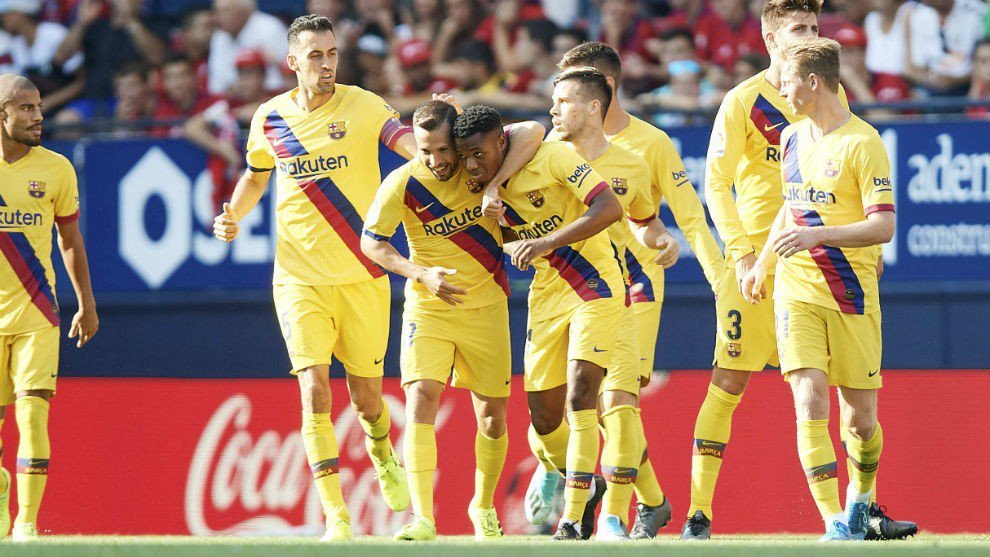 After an even not so visible down tour, the La Masia youth football academy, Barca’s youth system which holds the pervasive name as the talent building factory which is undoubtedly one of the best youth academies in the world, has come to bash the critiques when they forayed the academy by outbursting that La Masia’s good old times are over, very recently.

The much talented and promising youngsters such as Ansu Fati and Carles Perez has already started shutting their mouths right since the inception of making it to the Barca first team last week. Carles Perez has made names even before that when he showcased his brilliant set of performances in the pre-season tour.

? It's been a crazy week in the Fati family. It began with his son training alongside the first team to making his debut at the Camp Nou against Real Betis. pic.twitter.com/dxEUx9Txli

Ansu Fati is a Bissau- Guinean International. His entire roots are in the African continent. Fati moved to Spain when he was just six-years old when his elder brother Braima made signed for the Spanish side Sevilla FC. Fati hails from a football family, where both his brothers named Braima and Miguel are football players, along with his father.

Late reports are also showing signs that, even though a Guinean International, the Real Federacion Espanola de Futbol(RFEF), Spain National team has already started pulling the strings to land the wonderkid to Spain Football team, all thanks to absence of the Messiah, Suarez and Dembele where it helped the youngster to get minutes he needed right when it was needed, to set start off his own glory ! All hail La Masia too!