An efficient, ruthless performance from England saw Gareth Southgate’s side comprehensively trounce Ukraine 4-0 in the quarter final encounter in Rome. Harry Kane scored twice and rare scorers Harry Maguire and Jordan Henderson added to the scoreline. Their opponents hardly created any opportunities, save a couple of long-range efforts, as the English defence easily nullified them. With the victory, England set up a semifinal encounter with Denmark at Wembley.

Due to coronavirus restrictions placed on the UK by Italy, the England fans inside the Stadio Olimpico in Rome were outnumbered by their Ukrainian counterparts. But they made up for their lack of numbers with volume from the start, roaring on as the sides lined up. Southgate selected a more attacking lineup than the one from the win over Germany, with Mason Mount and Jadon Sancho in for Kieran Trippier and the injured Bukayo Saka. Ukraine brought on Vitaliy Mykolenko for Taras Stepanenko. 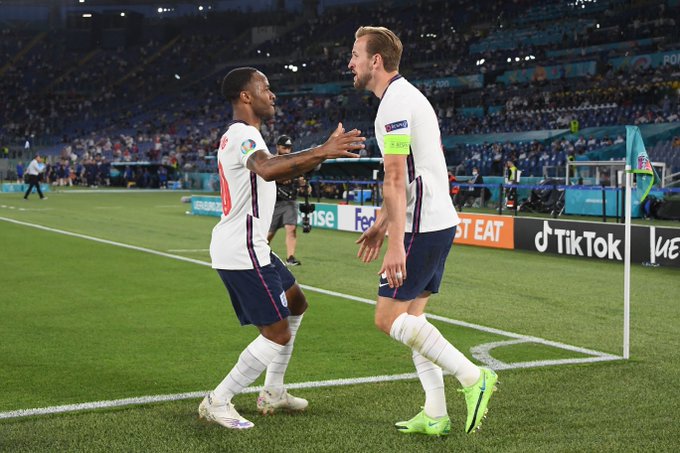 Within minutes of kickoff, England had taken the lead. Raheem Sterling embarked on a mazy dribble down the left, went inside, cut back and slid a sensational reverse pass to Kane that took four Ukraine defenders out of the game. The striker had the easy task of firing into the bottom left, via the glove of Heorhiy Bushchan. Coming in the 4th minute, the goal was England’s earliest at the Euros since 2004.

With the lead secured, the England players focused on slow build-up play from the back and a low block when Ukraine took possession of the ball. Although this meant that Ukraine could not find much space in behind to counter, it was still a rather negative approach. Roman Yaremchuk could have punished them when he ran onto a loose back pass from Kyle Walker, but sent his low shot straight at the onrushing Jordan Pickford.

That jolted England out of their slumber and they began controlling the tempo. Sancho, making his first start of the tournament after a six-minute cameo in the group stage, looked lively, sending defenders into a panic with his confident, driving runs. Declan Rice then fired a venomous shot from the edge of the area but Bushchan was equal to it. 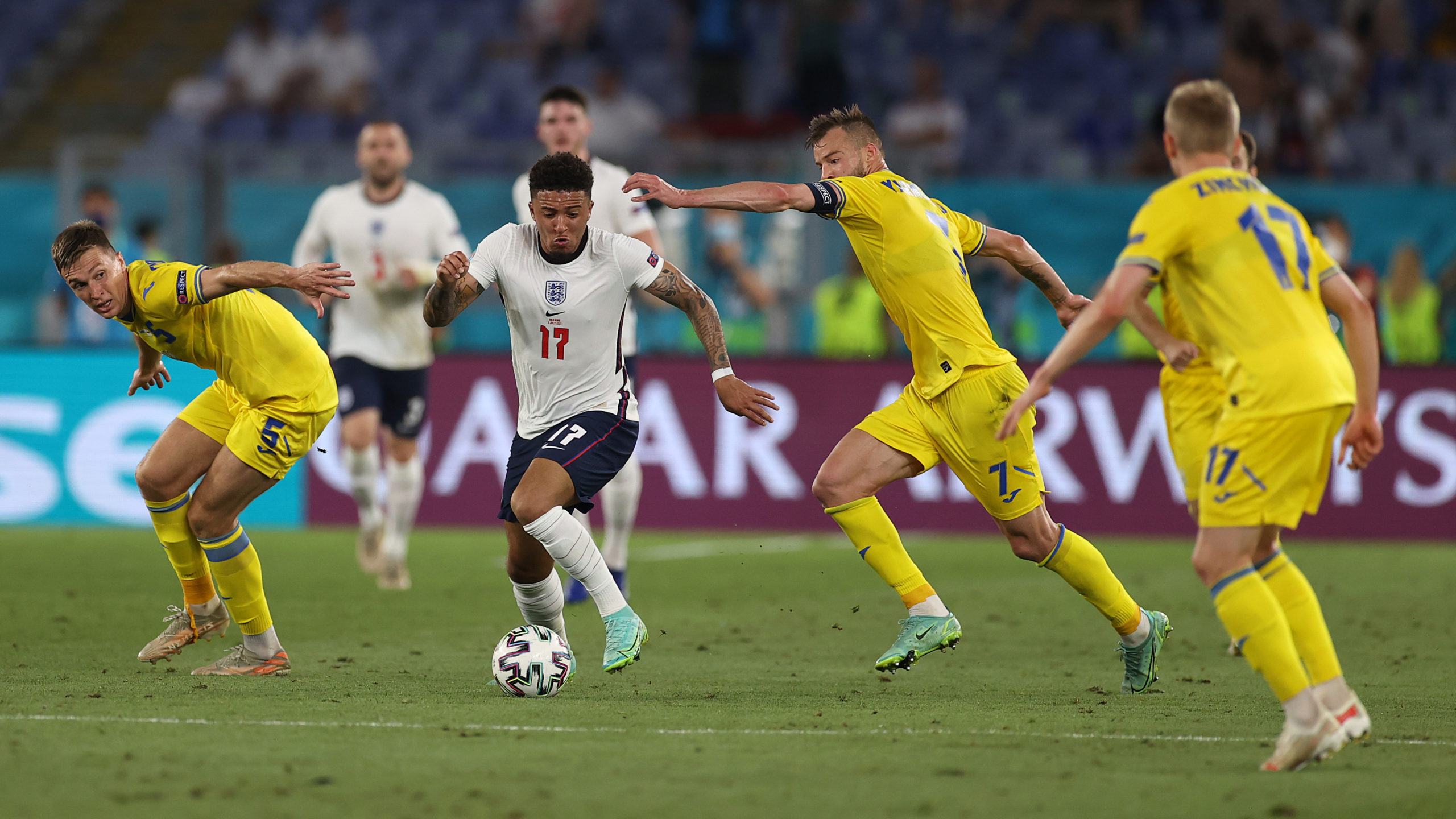 Sensing the need for a change, Shevchenko replaced defender Serhiy Kryvtsov, who had picked up a knock, with winger Viktor Tsygankov and switched to four at the back. The change gave them more attacking impetus, and they opened up England in the 37th minute, only for Oleksandr Zinchenko and captain Andriy Yarmolenko to get in each other’s way in the box, allowing Mount to clear. England replied with a shot from Sancho that stung the hands of Bushchan.

The last chance of the half fell to Ukraine, as Mykola Shaparenko curled wide from 25 yards after more good work from Zinchenko. The Ukrainian players went in at half-time knowing they were in the ascendancy. All they had to do was continue this approach and they would be back in the game.

England, however, had other ideas. Just a minute into the second-half, Luke Shaw curled in a beautiful freekick from the left for his Manchester United teammate Harry Maguire to rise highest and send a powerful header into the top left.

Then in the 50th minute, the magnificent Shaw created another goal. Collecting a clever back-flick from Sterling, the left-back stood up another delicious cross for Kane, whose downward header went through Bushchan’s legs. The two quickfire assists showed the importance of Shaw in this team, the left-back bringing his rich vein of form at club level to the national side.

With his two goals, Kane also highlighted his importance. After poor performances in the group matches, he had scored against Germany, a goal that seemed to restore his predatory instinct. That instinct got him his two goals in this match and he nearly completed his hattrick in spectacular style, slamming a superb volley from 25 yards towards the top right that was kept out by a stunning save from Bushchan.

The quick burst of goals completely deflated the Ukrainians, their plans ripped up and their chance of a comeback gone. This allowed Southgate the opportunity to take off some players, protecting them from yellow cards and injuries, and allowing others to stake their claims.

The next goal came in the 63rd minute from one of these substitutes. Mount’s corner from the left was curled in for Jordan Henderson, on for Rice, to direct his header across the keeper and into the bottom-left. This was Henderson’s first goal for England, in his 62nd appearance, the longest time an outfield English player has had to wait for a goal. He celebrated the moment with appropriate gusto.

The game began meandering after that goal, with England sure of progress. Perhaps due to this, Pickford nearly produced a moment of high farce in the 71st minute, coming way out of his area to clear a long ball, only to slice his kick straight upwards. The ball fell to Roman Yaremchuk, who tried to find the empty net with a low drive that was easily blocked by a covering defender. He should have gone the Patrick Schick route and looped it in. 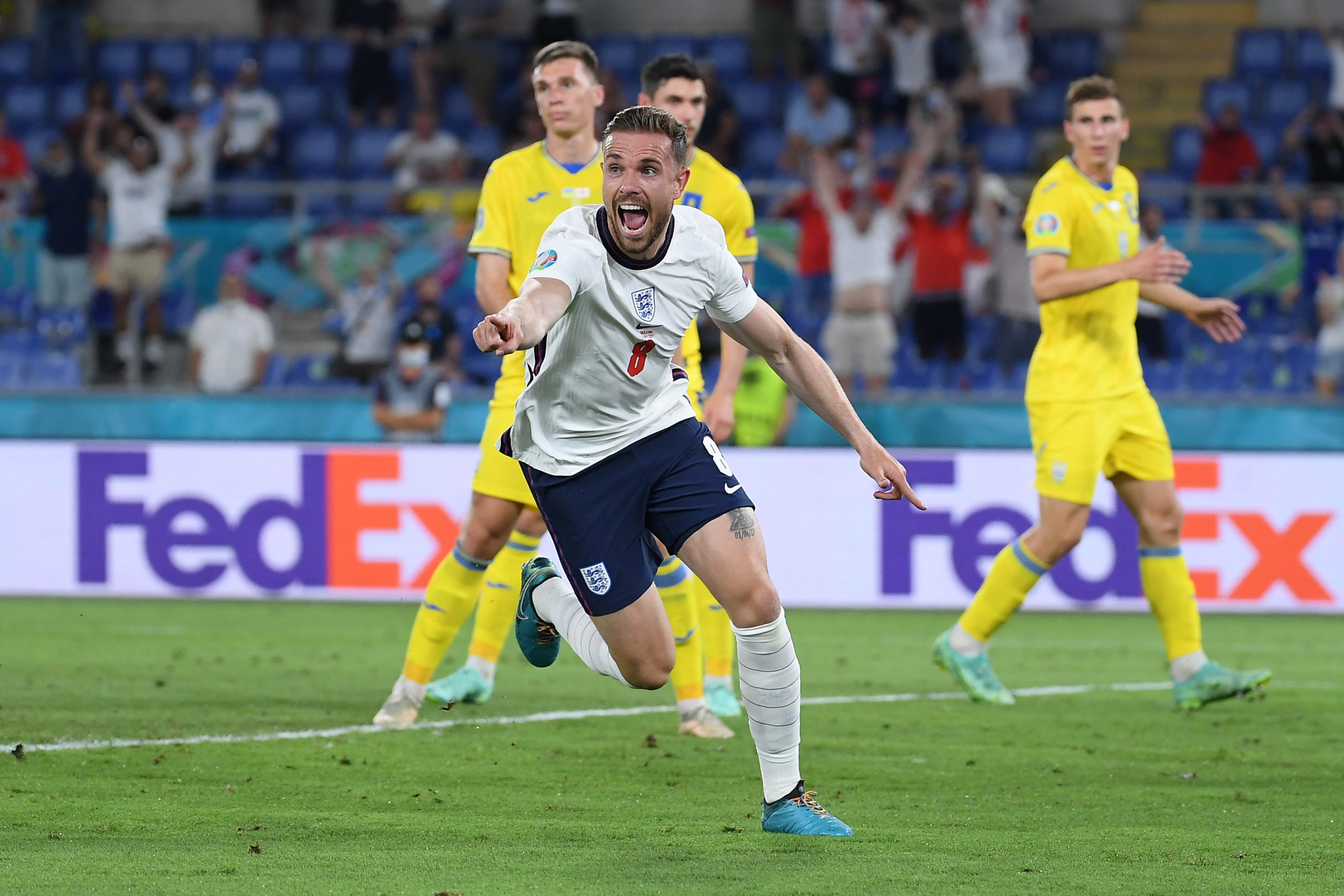 The only shot on target after that was a Yevhenii Makarenko strike from 25 yards that Pickford easily dealt with. Two-goal hero Kane was then withdrawn to loud applause. He now has 9 goals for England at major tournaments, behind only Gary Lineker, who scored 10. The match was then allowed to fizzle out, the referee blowing the final whistle as soon as the 90 minute mark was reached.

After scraping through the group stage and earning a last-minute victory against Sweden, Ukraine were out of Euro 2020. Their performance on the night was extremely poor, their only good spell coming 10 minutes before the end of the first half. But they defied expectations to reach the quarterfinals and were given a warm sendoff by their fans at the end of the game.

England will now go back to Wembley for a semifinal against Denmark on Wednesday. The home advantage will be just one more boost for a side that is shifting up the gears. They became the first side in European Championship history to record five consecutive clean sheets, and their solid defensive platform allows the forwards to shine. Their strength in depth is immense and their focus is sharp. As hope begins to swell around them, hope for the final, hope for a maiden Euro Cup, hope for the end of 55 years of hurt, there will be only one thing on the players’ minds: winning.