The English captain saw his extra-time penalty saved but pounced on the rebound to give his side a hard-fought 2-1 victory over Denmark.

For the first time in 55 years, England are through to the final of a major international tournament thanks to a battling semi final performance against a spirited Danish side. The Danes took the lead with a stunning freekick from Mikkel Damsgaard, but England forced an equaliser in the form of a Simon Kjaer own goal. Kasper Schmeichel was in inspired form and he kept out Harry Kane’s penalty in extra-time, but could not prevent the striker from converting the rebound and setting up a title clash with Italy.

Gareth Southgate’s men had been spurred on throughout by a truly raucous crowd at Wembley – where the final will also be played – and they produced a performance of grit and attacking determination, aided by not a little luck, to put aside previous semi final heartache and reach their first ever European Championship final, leaving the Danish fairytale with a sour end. Denmark, who had suffered through the trauma of Christian Eriksen’s on-field cardiac arrest, had produced amazing performances on the pitch, all as Eriksen thankfully recovered, to reach the last-four stage.They departed with their heads held high, having won the admiration of the football community. 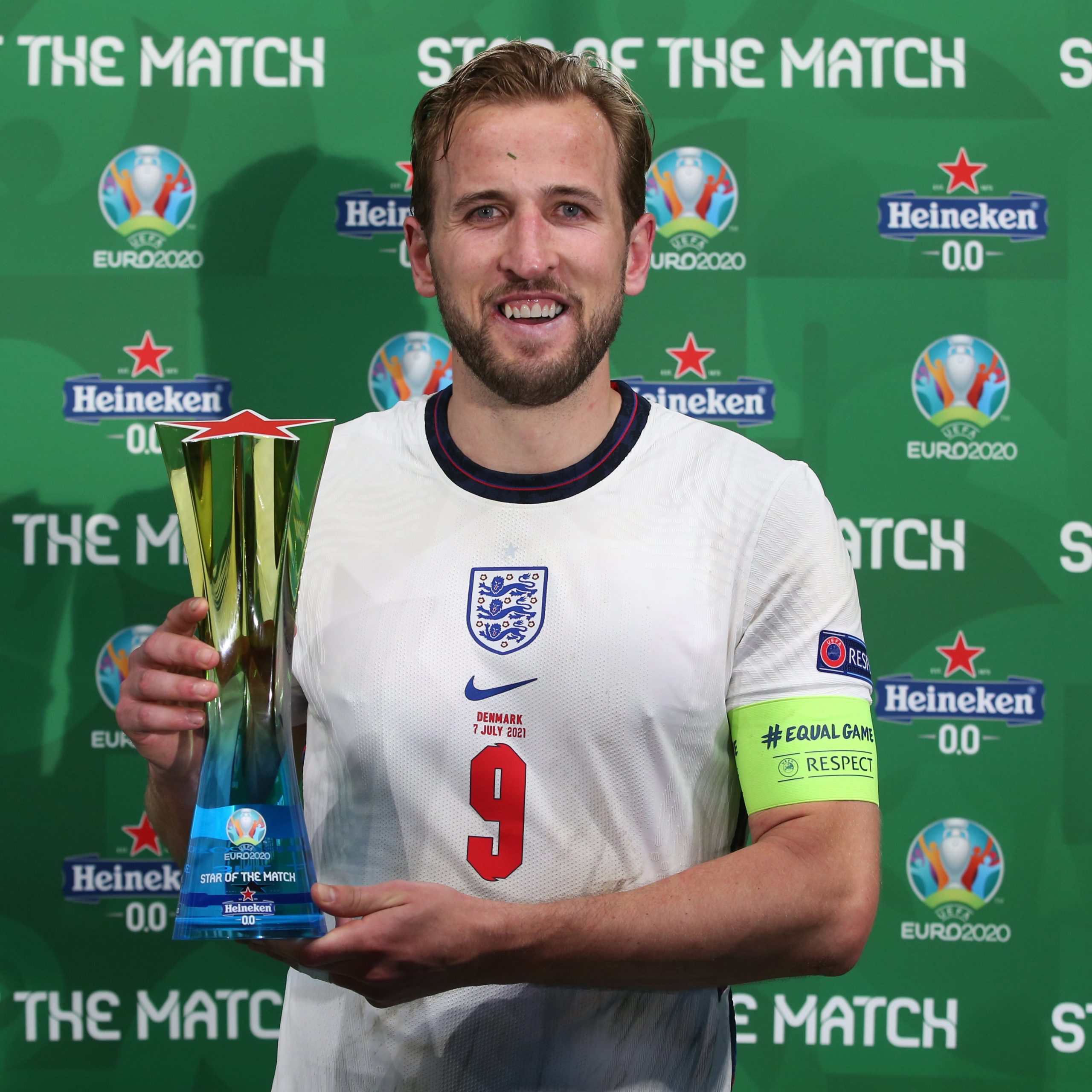 The match kicked off to a frenzied, thunderous atmosphere rarely seen at the new Wembley, as England stuck with the same formation used in the quarter final rout of Ukraine, their only change being the return of Bukayo Saka in place of Jadon Sancho. Kasper Hjulmand sent out the same Danish side that had beaten the Czech Republic in the previous stage.

England began brightly, with Raheem Sterling an early menace for the Danes, as he has been throughout the tournament. He won a freekick in 15 seconds, combined several times with Luke Shaw down the left wing and was presented with the game’s first chance, Kane’s cross from the right just too long for the winger. Denmark tried to hit back, but Kyle Walker’s pace helped him close down the dangerous Joakim Maehle as attempted to go clear.

England began to control the tempo, knocking the ball about at the back before launching quick attacks. Sterling scuffed his shot from 15 yards after a determined run and Kane fired well over from just outside the D after being set up by Walker.

Then came the first real test for the English. Pierre-Emile Hojbjerg stormed forward and hit a long range drive that was comfortably held by Jordan Pickford in goal. But the keeper then fluffed his lines, throwing the ball straight to Thomas Delaney who quickly passed to striker Kasper Dolberg. Dolberg’s shot was deflected wide and Pickford dealt with the resulting corner, much to the crowd’s relief.

But Denmark had gotten their tails up and began to stitch together more attacks. From the left-hand corner of the box, Damsgaard curled a lovely effort just over the bar, a warning shot that England didn’t properly heed. As the ball was launched into the air from a deep freekick on the right, Shaw clumsily pulled down Andreas Christensen to give Denmark another freekick just outside the English penalty area, a prime shooting position, in the 30th minute.

Up stepped Damsgaard. The 21-year-old Sampdoria midfielder, assigned with the unenviable task of replacing the talismanic Eriksen, had been excellent throughout the tournament, with his gliding runs and snappy passing. Here he showcased his technical ability with a curling, dipping screamer that Pickford failed to reach. It was an outstanding goal, the first from a direct freekick at Euro 2020, and the Danes celebrated wildly.

It was also the first goal England had conceded in the tournament and the onus was on the white shirts to respond to this setback. And while England sides of the past may have crumbled under the pressure, here they responded with urgency. From a similar freekick, Sterling was denied by the Danish wall. Then came a whirlwind of attacks.

From a right-wing cross, Sterling was presented with a sitter but fired straight at Schmeichel from about six yards out, the keeper spreading himself brilliantly. But England were allowed to recycle the ball and Kane, dropping deep into a passing lane, picked out the run of Saka with an inch-perfect pass. The energetic Arsenal youngster then fizzed the ball across goal where Kjaer, tring to prevent a Sterling tap-in, could only watch as the ball rebounded off his outstretched leg and into his own net. Denmark’s lead had lasted less than 10 minutes.

The teams went in at the break with the scoreline level, the Danes kicking themselves for wasting a counter just before the equaliser and England sighing in relief. From the restart, both teams set about reasserting themselves. Harry Maguire was booked for leading with an elbow into Kjaer as he leapt to head a freekick. Then Dolberg shot low from range and watched Pickford scramble into a save, although the striker was offside.

At the other end, Schmeichel pulled off another brilliant save, hurling himself to his right and getting his fingertips onto a Maguire header. Then Dolberg had another shot, but this one was easily dealt with by Pickford. Agin England attacked, Mason Mount presenting Schmeichel with an easy save after good play by Saka and Sterling.

Denmark were beginning to look weary, forcing Hjulmand into a triple substitution. Southgate, sensing an opportunity, sent on the skilful Jack Grealish for Saka, who had faded after a bright start. Grealish was immediately in the thick of things, his quick feet earning a yellow card for Daniel Wass who brought him down. Then a cross-shot from Mount nearly crept in, with a backpedaling Schmeichel just about tipping it over.

England kept pressing forward, looking for the winner that would finish off the game in regulation time. They pressed and probed relentlessly, but the Danish defence held firm, preventing a killer pass. Kalvin Phillips blootered a long shot into the stands and the referee blew his whistle soon after.

England continued to pile on the pressure in extra-time, keeping the weary Danes hemmed in. Sterling, finding a second wind, terrorised the red shirts with outstanding pace and dribbling. And it was one such incursion by him that finally broke Denmark. As he ghosted into the box from the right, he went down under pressure from two defenders. Although replays showed minimal contact at best, referee Danny Makkelie pointed to the spot and his decision was upheld by VAR, who did not even ask Makkelie to check the pitchside monitor. It seemed that Lady Luck was smiling down on England at last.

Kane stepped up to the spot and found another slice of luck. His woeful penalty was saved well by Schmeichel, but the rebound fell back to Kane who tapped it in gleefully, sparking a huge roar from the Wembley crowd. Kane had now scored in all of England’s knockout games, putting to bed his poor performances in the group stages.

All England had to do was see out the last 15 minutes. Southgate signalled his intentions by withdrawing Grealish for right-back Kieran Trippier. England were happy to sit deep, helped by the fact that Mathias Jensen was off the field with injury, leaving Denmark, who had made all their substitutions, with 10 men as they searched for an equaliser. There was one chance for Braithwaite, well saved by Pickford, but England kept the ball away from the Danes easily.

At the final whistle, Wembley went wild with deafening noise and scenes of jubilation, matched on the pitch by the players who had just booked England’s spot in their first ever European Championship final. Records were broken, with Pickford bettering Gordon Banks’s mark of 720 minutes without a goal by 5 extra minutes before it was ended by Damsgaard, and Kane equalling Gary Lineker’s record of 10 English goals at major tournaments. They have also crossed a psychological barrier,succeeding where so many of the predecessors had failed. Now the Azzurri await the Three Lions in the final, and so does an expectant nation.