A Dolberg double and late goals from Maehle and Braithwaite saw Denmark cruise to a 4-0 win against an inept Welsh side.

In the first knockout match of Euro 2020, Denmark continued their fairytale run mirroring Christian Eriksen’s recovery from cardiac arrest. They were superior in every department as they swept Wales aside with a 4-0 victory at the Johan Cruyff Arena in Amsterdam.

The first two goals were scored by Kasper Dolberg on his first start of the tournament. The wing-back Joakim Maehle scored the third and Martin Braithwaite fired in the fourth with practically the last kick of the game. 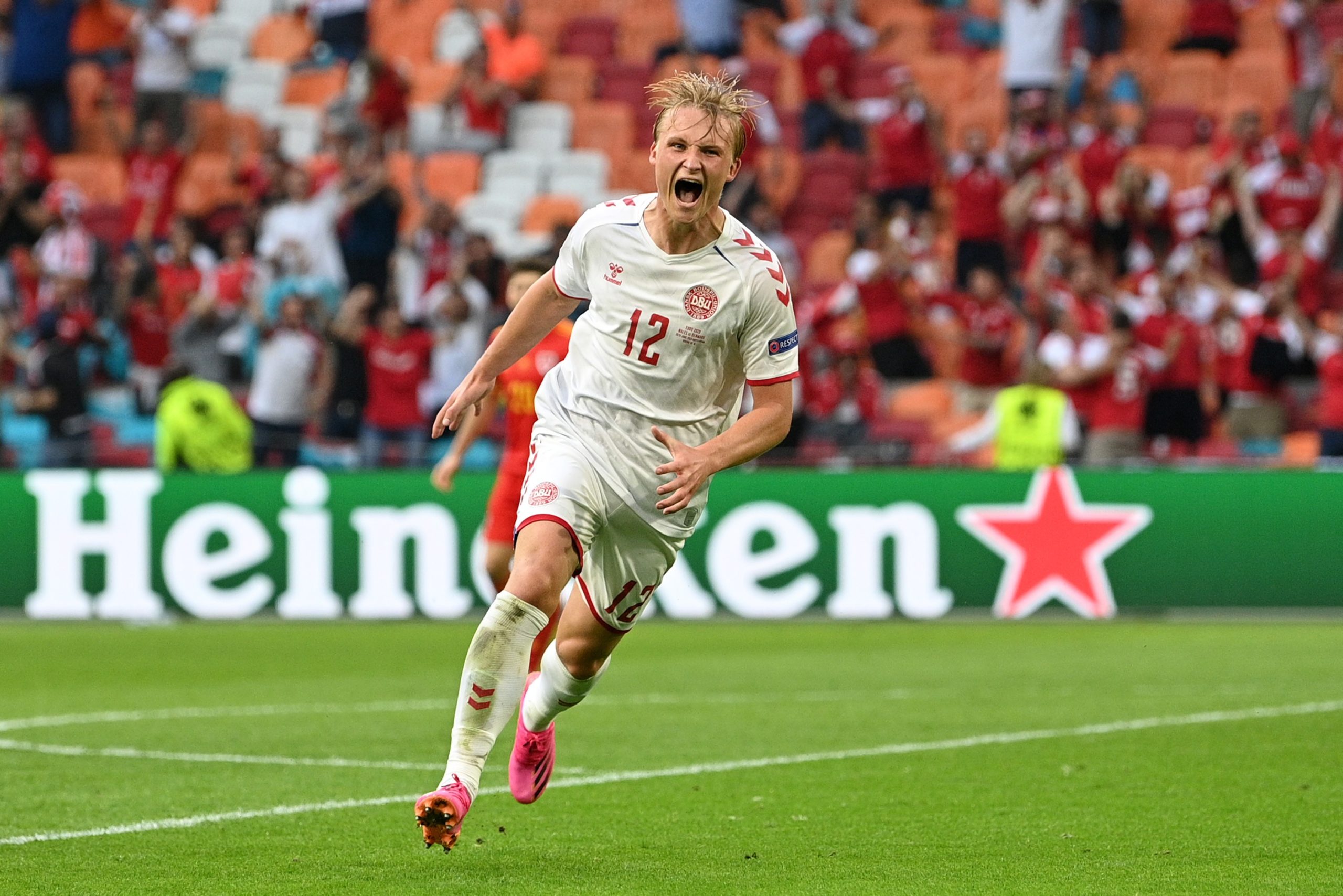 Since their first match, Denmark’s tournament story has been dominated by the collapse and subsequent recovery of Eriksen, and it was prevalent here as well. Everywhere you looked there were banners in support of the midfielder. A giant replica shirt bearing Eriksen’s name was unfurled on the pitch before kickoff. At the same time, Wales skipper Gareth Bale presented his Danish counterpart Simon Kjaer with a framed Welsh shirt bearing Eriksen’s name as well.

There were two changes for Denmark from their trouncing of Russia. The injured pair of Yussuf Poulsen and Daniel Wass were replaced by Dolberg and Jens Stryger Larsen. For Wales, Ben Davies, Chris Mepham and Kieffer Moore returned to the starting lineup, with Neco Williams, Chris Gunter and the suspended Ethan Ampadu making way.

The match began with Wales, wearing all red, in control for the first 10 minutes. Bale looked bright on the right wing, drifting into pockets of space and trying his luck. He struck a couple of shots from range that went just wide and also tried to provide for his teammates.

Then, almost out of nowhere, Denmark struck. In the 27th minute, Maehle’s pass was collected on the left by Mikkel Damsgaard, who spun past Aaron Ramsey and passed to Dolberg. The Nice striker slipped past two Welsh defenders before curling a lovely effort from just outside the area that went into the far corner of the goal.

The goal put Denmark in the ascendancy and completely rattled Wales. They were lucky not to concede another as, minutes later, Damsgaard sent in a cross that Dolberg flicked on at the near post. Goalkeeper Danny Ward reacted smartly to save with his right hand. Denmark kept creating more chances and Wales were lucky to go in at the break just a goal down.

Their luck didn’t last long after the interval. In the 48th minute, Braithwaite chested the ball down near the touchline and fired a wonderful ball across the six-yard box. None of his teammates had kept up with him and the ball fell to Wales substitute Neco Williams, on for the injured Connor Roberts. But the inexperienced fullback hacked a panicked clearance straight to Dolberg, who fired home gleefully.

Another substitute, Denmark’s Mathias Jensen, then tried an innovative looping cross-shot from a tight angle that had Ward beaten but scraped off the post. The Danes then slowed the tempo down and prevented their opponents from creating chances to get back into the game. Then they scored in the 89th minute, Maehle cutting in from the right, sitting Joe Rodon down with a fake shot and then smashing the ball into the roof of the net.

The Welsh players crumbled and lost their collective heads. Harry Wilson was shown a straight red for a frustrated challenge on Maehle just after the goal. Denmark then rubbed salt into their wounds, Braithwaite collecting a cushioned pass from Andreas Cornelius before spanking a low diagonal effort into the bottom corner. The linesman raised his flag but a VAR review overturned his decision and Denmark had their fourth goal in the fourth minute of stoppage time. They also became the first side in Euros history to score 4 or more goals in consecutive games.

After some good performances in the group stage, more had been expected from this Welsh team. They failed to deliver on the day but could be quietly proud of their overall performance in only their third major tournament. Their campaign ended on a strange note when, in the post-match interview, Bale responded to a question about this match being his last in a Wales jersey by simply walking off.

Denmark, on the other hand, keep rolling on, carried by the fervent support of their fans and the goodwill generated by the Eriksen incident. On the pitch, they have improved considerably as the tournament has gone on. They look hungry for more and will look to reproduce this performance against the Netherlands or the Czech Republic, one of whom they will meet in the quarterfinals.

UEFA to scrap away goals rule from all club competitions