Liverpool, the new kings of Europe

Liverpool overcame Tottenham 2-0 at Madrid’s Wanda Metropolitana stadium on Saturday to win the uefa champions league for a sixth time.

In a largely uninspiring contest, Mohamed Salah slammed home a penalty just after two minutes from kick off after Moussa Sissoko handled Sadio Mane’s cross., though the referee’s call looked to be controversial.

Apart from the opening goal, the match lacked quality and action- until semi-final hero Divock Origi came off the bench to blast home a second late on to send Reds fans into delirium.

Mo Salah converted a second minute penalty, while substitute Divock Origi put the title on ice with an 87th minute strike to earn the Reds the trophy. However, it was the Liverpool defence that made this Final triumph possible. Led by the superb Virgil van Dijk, the Liverpool back-line was an impenetrable force and never allowed the Tottenham attack to find any type of rythmn. 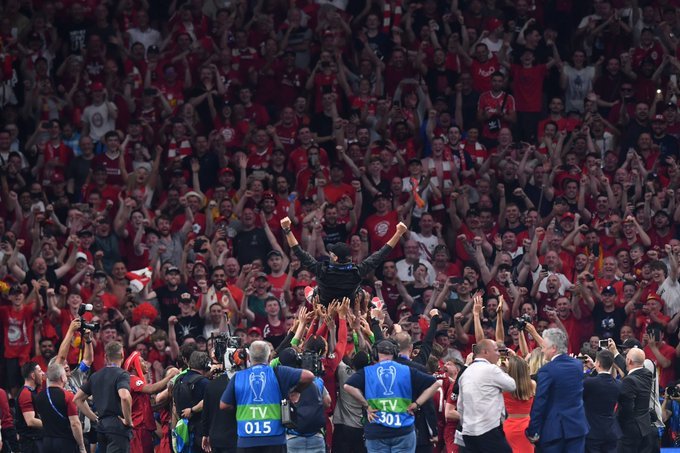 There were no major surprises in either starting XI. Tottenham manager Mauricio Pochettino welcomed back Harry Kane up top at forward, meaning the hero of the comeback at Ajax, Lucas Moura, was relegated to the bench. Meanwhile, Liverpool boss Jurgen Klopp slotted in semifinal hero Georginio Wijnaldum in midfield and Roberto Firmino in attack.

The early Liverpool goal made Spurs nervy and they tried to settle in with greater spells of possession, but the Liverpool defence was set up well and easily kept dangermen Kane and Son Heung-min in their pocket.

Overall, it was a first half lacking in quality. The only thing that got the blood flowing after Salah’s goal was a stinging shot from Liverpool’s Andy Robertson that Spurs goalkeeper Hugo Lloris had to deflect over the crossbar.

Tottenham showed a bit more urgency to start the second half and it helped open things up briefly before play reverted back to what was on display in the first half. Klopp was first to go to his bench, as the nonexistent Firmino was taken off for Origi and James Milner came on for Wijnaldum.

"Liverpool is the city of music, of the working class and of football."

"Anyone who has managed in England knows it is a special place for football. That's why they can always make miracles."

Spurs made their second substitution as their quest for an equaliser continued with Sissoko making way for Eric Dyer. It took some time but Tottenham’s attack finally came to life through chances for Son and Moura, however, it was nothing that Liverpool goalkeeper Alisson could not handle.

Pochettino’s last roll of the dice came with Fernando Llorente on for Dele Alli helping Spurs keep the pressure on. A free-kick from Christian Eriksen forced Alisson into another save, but that would be Tottenham’s final moment, as at the other end Spurs failed to clear their lines and Origi, with time and space, rocketed in a left-footer for a 2-0 lead that would hold until the final whistle.

The win was sweet redemption for Salah and especially German Klopp, who had suffered defeat on his last six appearances in major finals, including Champions League showpieces with Borussia Dortmund in 2013 and Liverpool last year.

Klopp is the fourth Liverpool manager to win the European Cup.#UCLfinal pic.twitter.com/mQIS6b2rLf

“I am so happy for the boys all these people, and my family. They suffer for me, they deserve it more than anybody,” Klopp said.