The hosts took an unexpected lead after Jarrod Bowen scored twice in the first half, but City recovered with goals from Jack Grealish and Vladimir Coufal in the second.

Mahrez’s late penalty kick was saved by Lukasz Fabianski, giving Liverpool slim hope in the hunt for the championship.

He's one of our own.

Pep Guardiola’s squad lead the table by four points, although Liverpool has a game in hand.

Craig Dawson, who was unmarked, missed a close-range header for the home team in the first minute of play.

Kurt Zouma appeared to have fouled Gabriel Jesus inside the penalty area after 15 minutes, but the referee waved aside City’s claims for a penalty.

It was a pivotal moment, as West Ham scored less than ten minutes later when Bowen evaded the offside trap, dribbled past Ederson, and finished expertly in the far corner.

At the stroke of halftime, West Ham’s lead was extended when Bowen again sprinted behind City’s defence and beat the goalie. 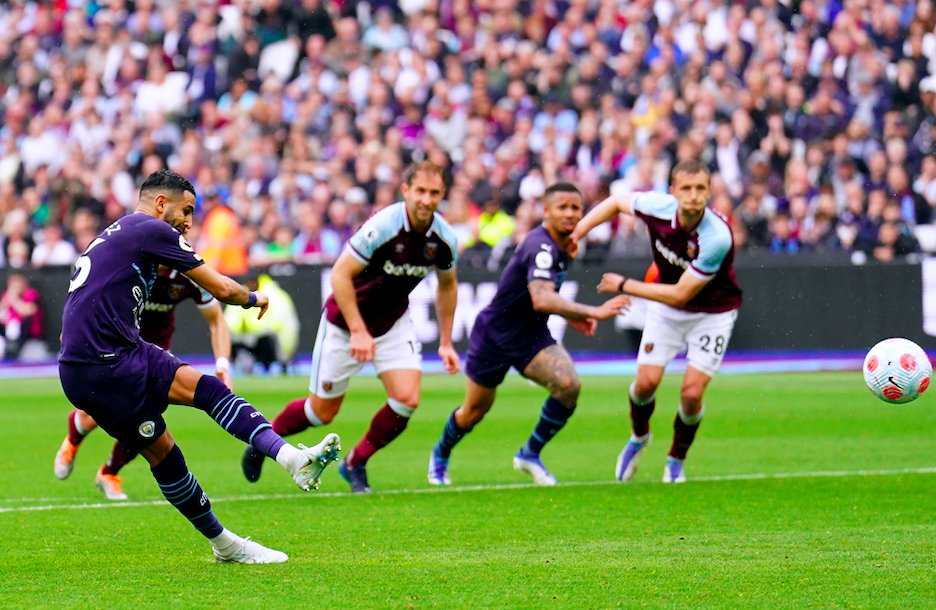 Grealish’s deflected shot netted a goal for City four minutes into the second half as City responded impressively.

The visitors began to dominate possession, but West Ham had the better opportunities to extend their lead to two goals.

Bowen nearly capitalised on a defensive blunder but hit the side netting, but Michail Antonio squandered a one-on-one opportunity with Ederson.

However, City equalised after 69 minutes when Coufal headed Mahrez’s free kick into his own net.

Jesus was hauled down inside the penalty area by Dawson with five minutes remaining, and following a VAR review, City were awarded a penalty kick.

Mahrez went up to take the penalty, but Fabianski saved it, allowing West Ham to preserve a draw.