Martin Ødegaard as a religious experience

Ødegaard, who is the product of efficient and rigorous training drills under the supervision of his father, Hans Erik Ødegaard, are blurring the lines of this ‘fast-paced’, ‘machine-like’ game in the era of big-data analytics with that of ‘pleasurable’, ‘crafty’ game. This blurring is essentially demystifying the logic of ‘nostalgic lamentation’ over the lost ‘real-ness’, ‘values’, and ‘craft’ of the game, instead of delving into the historical premises that informed and influenced them.

This is not an article about Ødegaard. Nor it is about his professional career ranging from his 15-year-old start at Strømsgodset and then as a wonder kid at Madrid at the age of 16, and now, at the age of 23, as a potential captain for Arsenal in the coming season. This is more or less an ode to one hell of a goal.

This is more about a goal he scored against Everton, on the final day of the English Premier League last season. The match was more or less an irrelevant one, considering the fact that Arsenal had effectively lost their race, which was not even a race at first, for UCL’s spot against their arch-rivals Tottenham Hotspur FC. The only chance for Arsenal was that the Spurs should lose to Norwich, a PL side with one of the worst and weakest defense lines in the league. This was not going to happen. Not to a team with two professionals, Heung Ming Son and Harry Kane, in their peak leading their front line. And it didn’t happen. Spurs destroyed Norwich city. 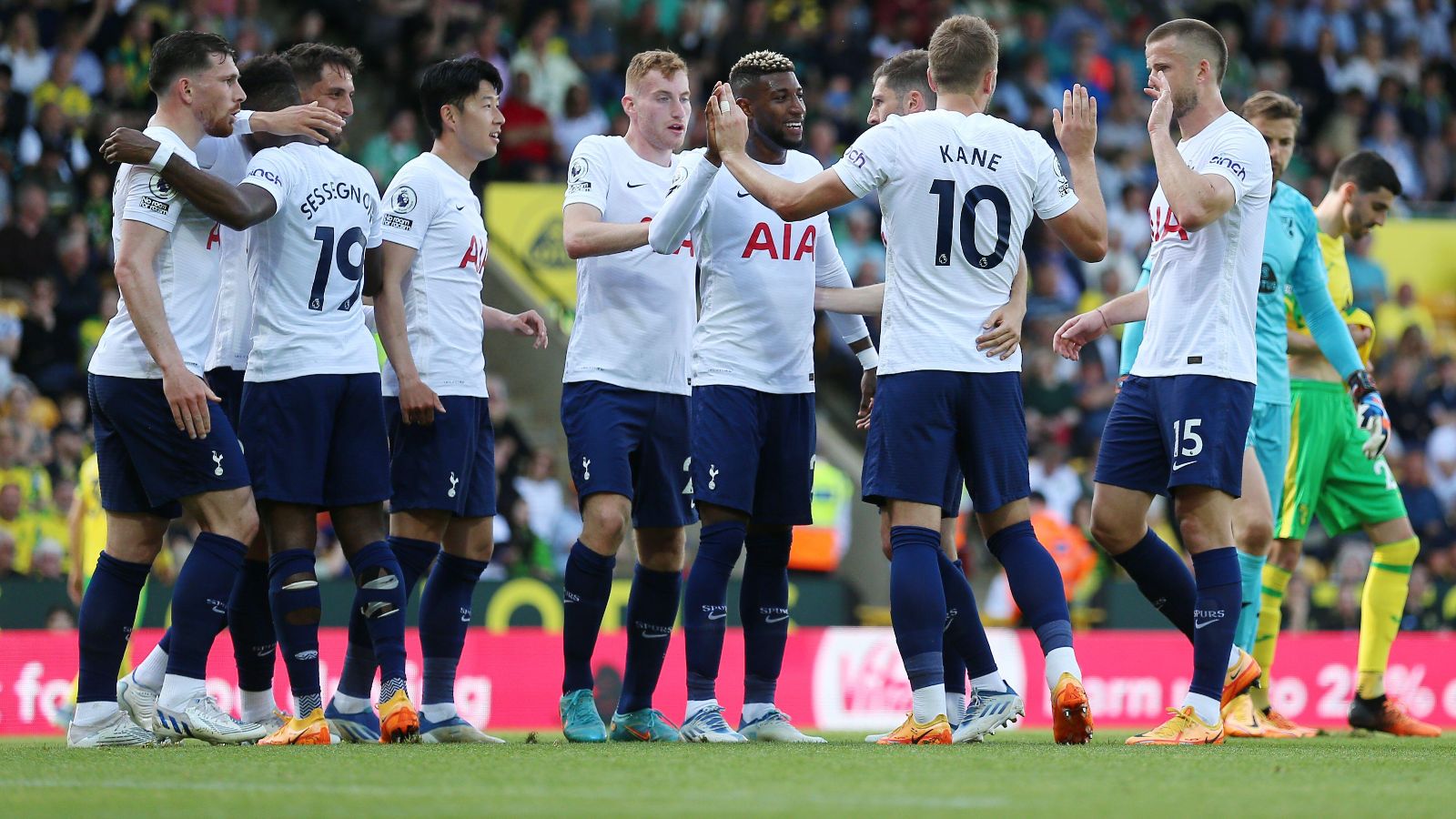 The Moment to Come

Coming back to the ‘irrelevant’ match, Arsenal was playing an ‘Arsenal-like’ game from the very start of the game. Scoring two goals in the first half and conceding one in the most arsenal way, it felt like they are going to sweat in the second half. But, thanks to a stunner from Cedric and another neat finish from Gabriel, Arsenal effectively killed the game with almost half an hour to go.

The moment was yet to arrive. Ødegaard received a back pass from Pepe and then turned to give it to Elneny. Elneny looked forward and supplied it to an already advancing Cedric in the right-wing. The non-threatening cross, which was headed away by the Everton defense line, was controlled by Nicolas Pepe, who using his head moved the ball into an empty corner, just outside the Everton box. After controlling it near the touchline and holding it for a second, he turned aside and supplied it to the Norwegian, who was eagerly waiting for the ball, just outside the box.

With a left-footed touch, Ødegaard controls the ball and moves it almost a meter to his left. In an effective simulation of attempting a long-ranger, he tricks the young Isaac Price and dribbles past him effortlessly. Embarrassed, Isaac who has lost his balance tries to get back to him. But it was too late. Thanks to the earlier embarrassment, he had the privilege to watch a work of art right in front of his eyes, one of the subtlest and sublime goals in the past season.

Isaac was looking at his senior counterparts, Holdgate, Keane, and Kenny, who were looking as clueless and childish as him. What did Ødegaard do to make four defenders and a goalkeeper this helpless? He touches, the ball, fakes a shot, dribbles past a defender, and then with his left foot, he places it in the bottom right corner of the Everton goalpost. What makes this simple, normal left-footed finish an exceptional goal? It is this very simple–ness and normality, I would say, is that makes it an exceptional one. 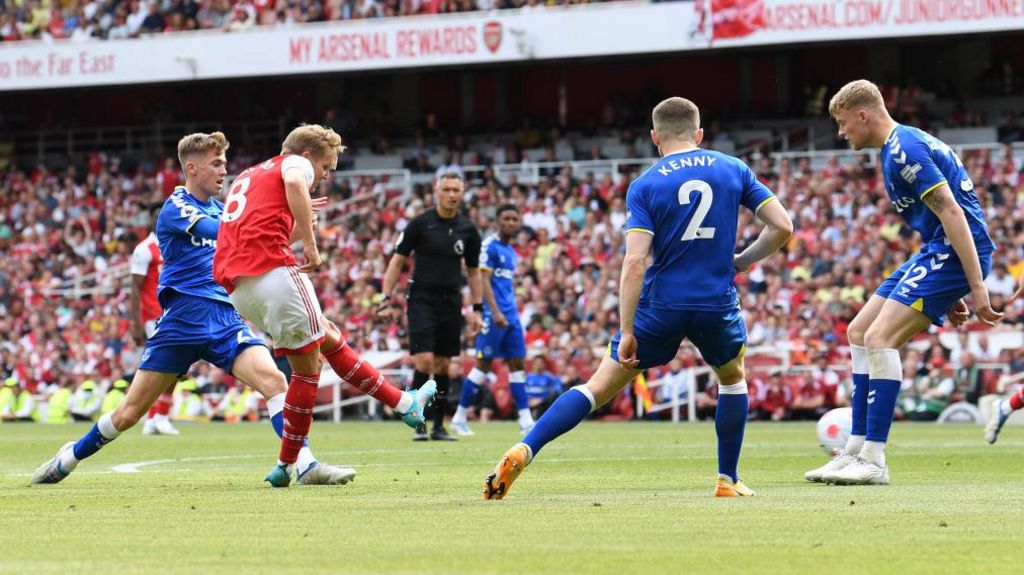 To be satisfied with the outward appearance without looking for the essence would be ‘superfluous’ and ‘vulgar’ as Marx would say. The essential reality that informs this goal is relentless training and supreme technical perfection. The technique of the first touch to create a shooting space was sublime, and so were the dribble and the placement that followed. He was not harshly beating the ball, nor was he kicking it hard. All he did was touch it softly.

After dribbling the young Isaac, he made two touches to make the ball move forward, but not too quickly. And then, he made his decision. A soft, precise touch! It was like he was letting go of some of his ‘dear natural possession, a piece of his life, a voice (maybe silence) from it’, to borrow from Rilke. This was also one of the most mess’iesque goals I have seen in recent times other than that of the real Messi’s goals. The characteristics of the touch, dribble, movement, and the finish were all like Messi’s.

The Waning No. 10s and a Norwegian Youngman

“No playmaker in the world can be as good as a good counter-pressing situation”- Jürgen Klopp.

“The figure of the No 10 has almost disappeared. We see less magic, less fantasy. Footballers do more but faster. There’s no need to dribble because you run. Players are more developed in every sense. You lose that player who’s different, who ‘breathes’; the playmaker who was slower even if he had sublime technique doesn’t get the opportunity to turn. Those of us who are not so fast with our legs have to be faster in our heads. It’s like anything in life: adaptation. Things keep moving. Football changes constantly, expressed differently”- Thiago Alcântara.

Klopp’s remark perfectly captures the way modern football is not only heading towards but how it is mostly (read successfully) played in the contemporary times also. The dying breeds of No.10s are a frequent phenomenon in the contemporary football world. Most of the nostalgic weeping over the loss of ‘magic and creativity’ is expressed through the domination of European football over the Latin American football, where the former is treated/mentioned as ‘Masculine/indifferent/Machine-Like’ and the former is wept over as ‘Feminine/Unique/Pleasurable’.

As mentioned earlier, the expressive realm or the outward appearance of the nature of grievances revolved around the nostalgic lamentations and expressed as curses against the ‘modern football’. It doesn’t provide us with much detail about the actual-real conditions that actualize, and make possible these transformations and changing relations.

While acknowledging the peculiar imaginations of aesthetics and beauty as converging points of nostalgic lamentations, Can we imagine football as a trans-historical phenomenon? The aesthetic lamentations and weeping over a ‘nostalgic past’ tend to ignore a crucial overarching presence; the presence and transformation of Capital. The lamentations over ‘handicraft pleasure’ as a phenomenon of the past, and attributing an external ideal value- devoid of the market- to football (Eg. The recent debates over the Super League) may satisfy some nostalgic weepings. But it fails to understand Football in its totality; or as a product of historical development and the transformation of capital. A Marxist imagination of non-alienated game/labour is never about lamenting over or going back to a nostalgic/ideal past. But rather, it is a future possibility.

What does this history have to do with Ødegaard? It is to show the likes of Ødegaard, who is the product of efficient and rigorous training drills under the supervision of his father, Hans Erik Ødegaard, are blurring the lines of this ‘fast-paced’, ‘machine-like’ game in the era of big-data analytics with that of ‘pleasurable’, ‘crafty’ game.

This blurring is essentially demystifying the logic of ‘nostalgic lamentation’ over the lost ‘real-ness’, ‘values’, and ‘craft’ of the game, instead of delving into the historical premises that informed and influenced them. Ødegaard is one of the players who can engage in the modern game effectively without necessarily taking out the element of beauty from it. Ødegaard plays football in one of the most non-alienated ways in which it can be played. Ødegaard demands us to historicize pleasure. This goal was a call for it!

An avid fan of Arsenal and Premier League, Afeef Ahmed is currently pursuing his masters in society and culture from IIT Gandhinagar

Arsenal completed the signing of Ben White for £50m