AC Milan moved three points clear of Napoli and six clear of Inter at the top of Serie A  with a hard-fought 1-0 victory against Cagliari on Saturday.

Ismael Bennacer scored the game’s lone goal in the second half, and Milan survived a number of scares late on their route to a merited one-goal victory.

The Rossoneri started strongly and were the only team posing a threat in the first half, with Theo Hernandez surging forward from deep and directing many of their attempts. Olivier Giroud, on the other hand, kept a low profile in front of Alessio Cragno’s goal. 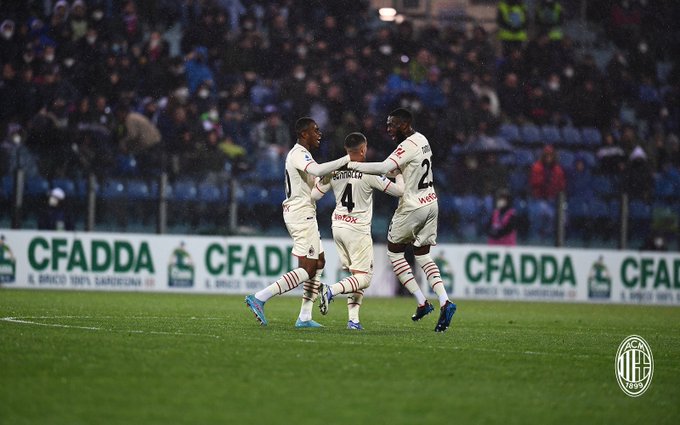 Things evened out considerably in the second half, but Milan had the upper hand for the whole of it and eventually scored when Bennacer completed a wonderful passing play. The ball was moved methodically to Giroud on the outside of the box, and he set up Bennacer with a slice of fortune as the ball rebounded pleasantly for Bennacer to send a volley into the bottom corner.

Napoli, who came from behind to defeat Udinese 2-1 earlier this season, are second in the league.

Udinese took the lead via Gerard Deulofeu, but Napoli’s Victor Osimhen scored a fast double early in the second half to make it four goals in two games.

Pablo Mari, on loan from Arsenal, was issued a red card late in the game for Udinese.

Inter Milan were held to a 1-1 draw at home to Fiorentina to fall six points behind rivals Milan, although with a game in hand.