The Azzuri scored three times for the first time in a single game at the European championship.

Italians spectacularly opened Euro 2020 as they start the campaign off with a dominant win over Turkey. They laid down a marker on the opening matchday with their biggest ever win in the competition. The Azzuri scored three times for the first time in a single game at the European championship. 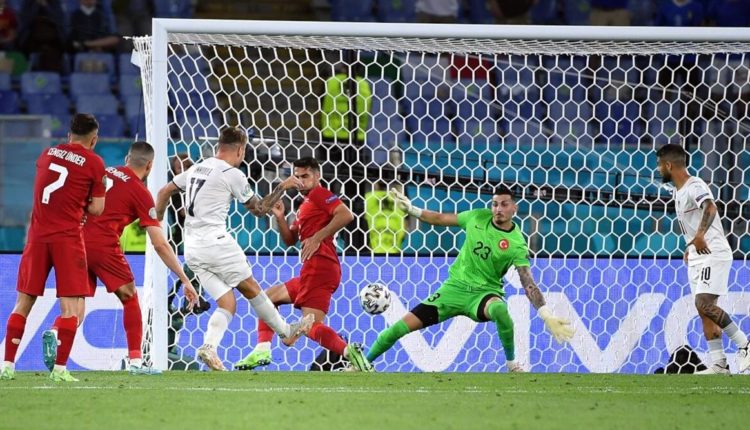 Postponed by a year, the biggest footballing event since the coronavirus outbreak, kicked off Friday at the Stadio Olimpico. The rescheduled tournament finally began with a dominant win for Italy over Turkey. Ciro immobile and Insigne’s goals for Azzuri and Demirals’s own goal for turkey ended up the game for a 3-0 victory for Italy in the opening match of Euro 2020. Roberto Mancini’s side who had dominated the possession with 24 attempts on the target turned on the style to extend their unbeaten run to 28 matches.

Italy dominated from the start but they were denied by a superb save from Turkey goalkeeper Çakr and a decision by the referee not to award a penalty for a clear handball at the 20th minute of the game. Italy took 13 shots in the first half and 3 of them were on the target. In the 21st minute, Georgio Chiellini went close to the net with a header but was pushed away by Çakr with a super save. 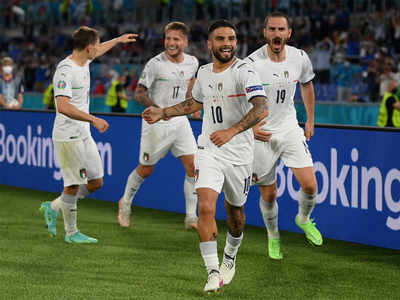 The deadlock was finally broken in the 53rd minute with a shot from Italian striker Berardi which Demiral could not block but deflected and finds the back of the net instead. Immobile and Insigne added Turkey’s woes as they scored once each other in the 66th and 79th minutes to take away the game from the opponents.

Immobile pouncing on a loose ball in the goalmouth and a beautiful curling shot from Insigne made history for Italians as it marked the first time they had scored three goals in a match at Euros in their 39th attempt.

“It was important to start well here in Rome, and it is a joy for us and all the Italians,” Mancini told Rai.

“We have played many teams that have done what Turkey did this evening. They put everyone [back] there, give you little space and make it hard for you to score,” said Mancini.

“But the lads had patience. We waited, kept playing, tried to get that goal, then we got it. The lads did well. The first half wasn’t straightforward and in a game like that, even if they [Turkey] put everyone back, if you give one [goal] away on the break, the game changes.”

“It was not our day. We started to lose the ball and couldn’t get forward. Italy was better – we lost to the better team. This is a tournament. We have two more games. We will prepare ourselves for the Wales game first.” Said: Şenol Güneş, Turkey coach 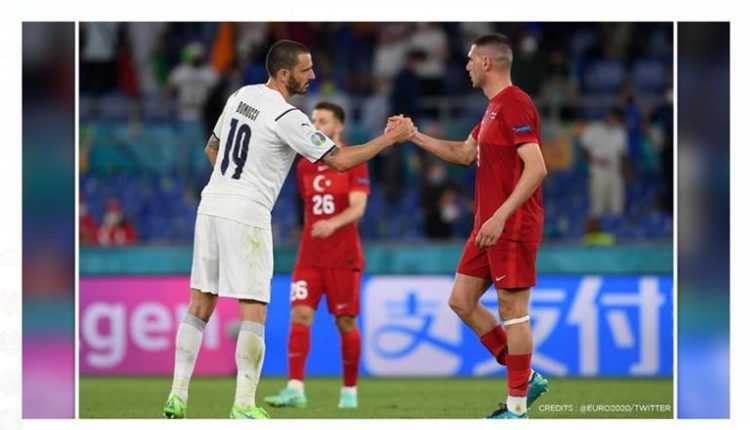 On a warm night in the Italian capital city, the Olimpico stadium was still only 25% full because of coronavirus measures but fans present added to a sense of celebration at the start of Europe’s biggest tournament. The 16000 audiences inside the ground represented the biggest crowd in Italy since the pandemic took hold.

Both teams will be back in Group A action on Wednesday with Wales meet Turkey in Baku while Switzerland takes on Italy in Rome. Wales and Switzerland will play their first in Baku today