London (AFP) Arsenal’s failings were cruelly exposed as their Champions League ambitions suffered a painful blow with a 3-1 defeat at Wolves on Wednesday.

Ruben Neves, Matt Doherty and the outstanding Diogo Jota scored the goals that condemned Unai Emery’s side to defeat and dented their hopes of a top-four finish.

But for all Wolves’ impressive play in a devastating spell at the end of the first half, Arsenal were architects of their own downfall with poor defending, sloppy passing and dreadful goalkeeping from Bernd Leno.

The goalkeeper was beaten by Doherty in the air for the second goal before allowing Jota’s low shot to squirm under his body for the third.

Arsenal have suffered their joint-heaviest defeat to a newly-promoted team in their Premier League history:

Their heaviest defeat of such in 25 years. ? pic.twitter.com/AfZYFgz0kH

He had already been beaten by Neves’s fine free-kick for the opener, with Sokratis’s late header for Arsenal proving no more than a consolation.

And Emery was left to ponder more away-day woes for the Gunners and a sign that some of the fragility that haunted former manager Arsene Wenger has not been cured.

Having looked comfortable in the early exchanges, the Gunners simply wilted once Wolves piled on pressure at the end of the opening half and a catalogue of errors left the visitors 3-0 down at half-time with no way back.

For 20 minutes it was comfortable for Emery’s side as they dominated possession and Wolves struggled to escape their own half.

The chief threat was from Nacho Monreal, advancing from full-back on their left flank, first to cross for Sokratis to volley off target, then to be stopped twice by Doherty, the second time earning the Wolves man a booking.

Yet the Gunners could not build on their early promise and Wolves worked their way into the game in stunning style, aided and abetted by brittle defending from the Gunners.

There were warnings when Jota burst down the Wolves left and Doherty down the right, leaving Arsenal defenders in their wake but not managing to deliver goals. 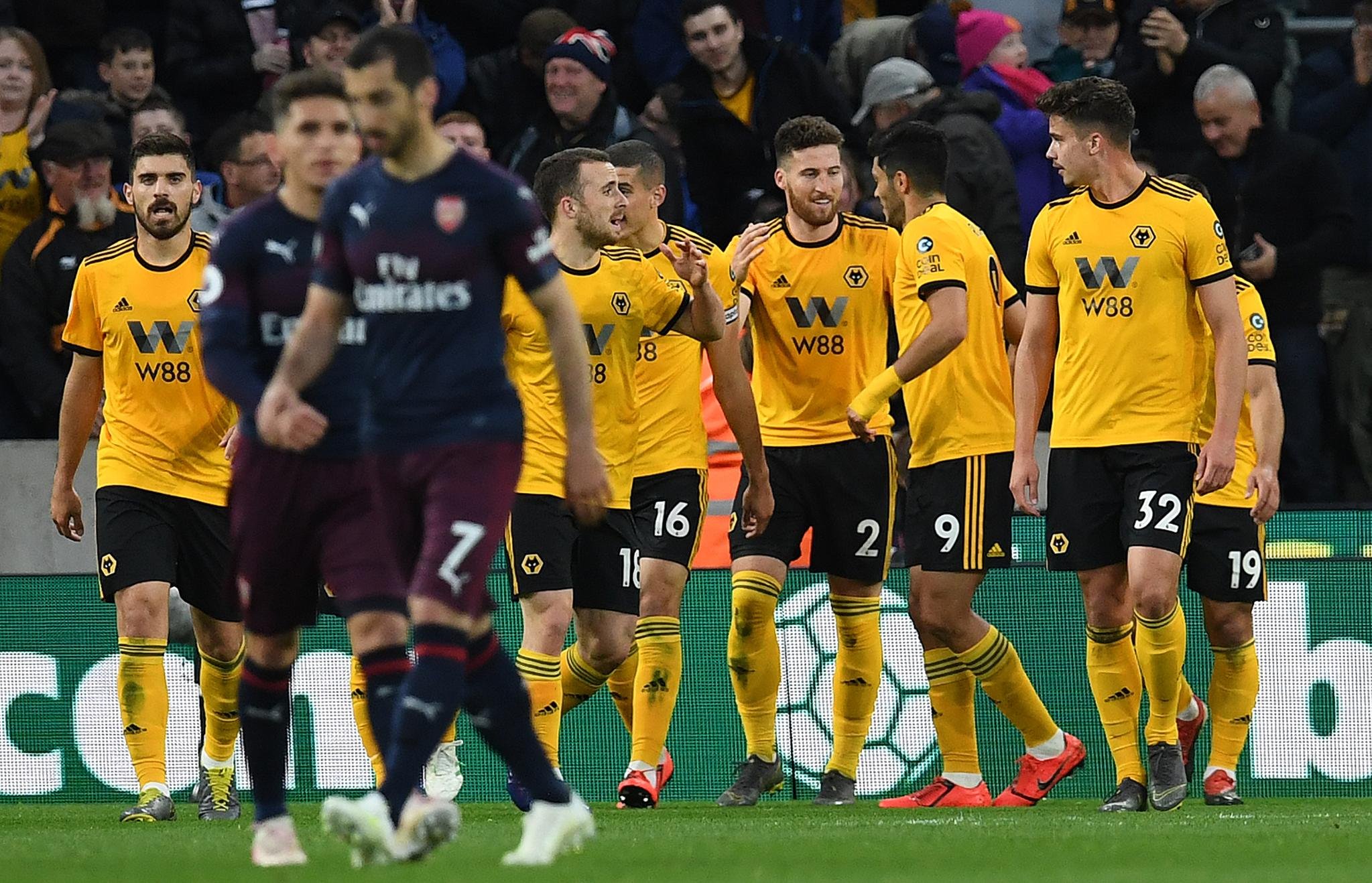 That changed when panic in the Arsenal defence saw Monreal foul Jonny and allow Neves to whip a free-kick over the wall and past Leno in the 28th minute.

Leno was culpable for the second goal, first for poor handling of a Jota shot that led to a corner and then for being outjumped by Doherty as he headed home a Jota cross 11 minutes later.

Then the Arsenal goalkeeper was one of several guilty parties for the Gunners’ third as he let Jota’s cross under his body and over the line on the stroke of half-time.

Granit Xhaka’s dreadful pass in the build-up and a non-existent challenge from Sokratis were equally responsible.

Wolves are the first newly-promoted team to earn 50 points in a #PL season since @BCFC in 2009/10 pic.twitter.com/utAsZztNa6

When Raul Jimenez crossed for Jota early in the second half, Wolves should have made it 4-0 but the forward’s touch let him down on an otherwise impeccable evening.

Arsenal had a strong penalty appeal rejected when Alexandre Lacazette tangled with Ryan Bennett and Sokratis headed a goal from a Xhaka corner with 10 minutes to go.

But even a brief spell of sustained pressure offered little serious hope that they could undo any of the earlier self-inflicted damage.

Paul Pogba: loss to Everton was a ‘disrespectful’ performance