Newcomers Brentford made a huge statement in front of a jubilant crowd as they stunned Arsenal in the first match of the 2021-22 Premier League season at the Community Stadium in West London on Friday night.

Goals either side of half-time from Sergi Canos and Christian Norgaard sent Thomas Frank’s side on to a historic win.

It was promoted Brentford’s first match in England’s top flight since the 1946-47 season and they marked the occasion by taking the lead midway through the first half when a poor Arsenal clearance allowed Canos to pick up the ball in the area, cut to his right and beat Bernd Leno at his near post.

“I thought we deserved the win. What I liked was how brave we were, pressing high and trying to play,” said Frank after the match. “The players were amazing, they ran themselves to the ground and played with intensity.

“On set-pieces I thought we were better, that’s why we did long throws and at times we could go high and knew that we could win the ball and create chances.”

Chances were few and far between for Arsenal as the hosts looked more likely to score as the half progressed with Brentford taking their one-goal lead into the break.

Brentford keeper David Raya did well to keep his team in front soon after the re-start, going down and to his right to parry away a shot from Emile Smith Rowe. 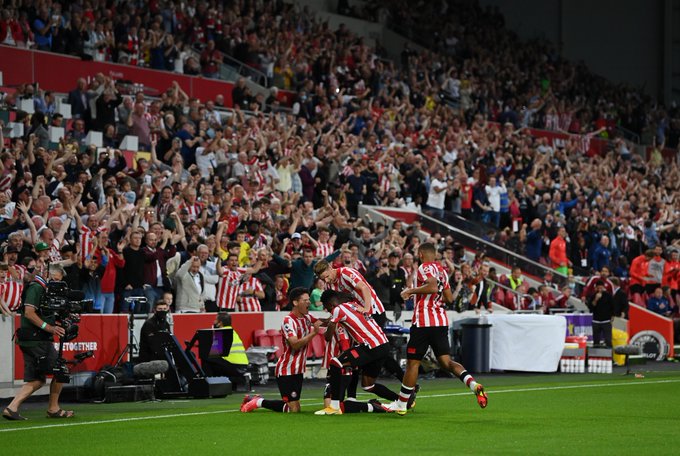 Arsenal continued to push for an equaliser as the game passed the hour mark, with Kieran Tierney flashing wide of the near post before Garbriel Martinelli’s glancing header from a corner went missed at the other post.

A long Brentford throw in in the 73rd minute somehow found its way across the goalmouth and an onrushing Norgaard beat Arsenal’s defenders to the ball and headed into an open net to double the lead for the Bees.

Arsenal boss Mikel Arteta, who was a ball of fury on the touchline almost from the start, had no real complaints as his side featuring several youngsters struggled to impose themselves.

“We started the season against a good opponent. I don’t think we deserved anything different,” he said. “They scored from a long throw in and we didn’t have enough presence in the box.

“A lot of young boys were doing everything they can. For some of them it was the first experience in the league – that says a lot.”

The result left fans at the Community Stadium singing “Hey Jude” while the team applauded the entire crowd as Brentford won their first match in the top flight in England since 1947.

Arsenal next host Chelsea on Aug. 22, while Brentford are away to Crystal Palace the day before.