European Football World United in Solidarity with Ukraine against Russia

Vitaliy Mykolenko and Oleksandr Zinchenko embraced ahead to Saturday’s Premier League match between Everton and Manchester City, with their homeland Ukraine still under attack by Russia.

The Ukrainian internationals exchanged brief words and hugged with City defender Zinchenko, who was visibly saddened as he joined a vigil outside Manchester’s Central Library on Thursday evening.

Everton supporters carried a banner reading “We stand with Ukraine,” as the club’s players marched out draped in the Ukrainian flag.

City players lined up for the match wearing t-shirts bearing the Ukrainian flag in blue and yellow and the words “No war.”

With football continuing around Europe, teams, players, and fans continued to demonstrate their support for Ukraine.

On the support of the crowd for the messages portrayed by the players, Manchester City boss Pep Guardiola said: “What a moment. Thank you so much for all the people. Zinchenko was very pleased. He was warming up. It means [a lot] what the people want to say.

“That is why thank you so much for reaction. It was so emotional.”

Everton boss Frank Lampard added: “The power of sport, we’ve seen in the last few days in many ways.

“I know how much heart is in this club from owner, to chairman, to fans, to players and we wanted to show that. We have a player with Vitaliy on our side and Zinchenko on their side, and our fans and their fans [came] together

“That is the unity of sport and a lot of people on the outside could learn from that as well.”

Prior to Manchester United’s 0-0 tie with Watford, both teams, along with their management, gathered in front of a banner at Old Trafford that said “Peace” in a variety of languages, including Russian and Ukrainian.

Ralf Rangnick, the interim United manager, introduced the proposal, which was supported by both sets of players and clubs.

Matty Cash celebrated scoring the opening goal in Aston Villa’s 2-0 victory over Brighton by revealing a message underneath his jersey for Poland teammate Tomasz Kedziora, who currently plays for Dynamo Kyiv.

“Stay strong my bro,” read the message. The Villa defender was booked for his celebration.

Elsewhere in Europe, a minute’s silence was observed prior to Bayern Munich’s 1-0 Bundesliga victory over Eintracht Frankfurt.

The German football league (DFL) declared that all top-flight and second-tier matches in Germany this weekend would reflect peace and solidarity with Ukraine. 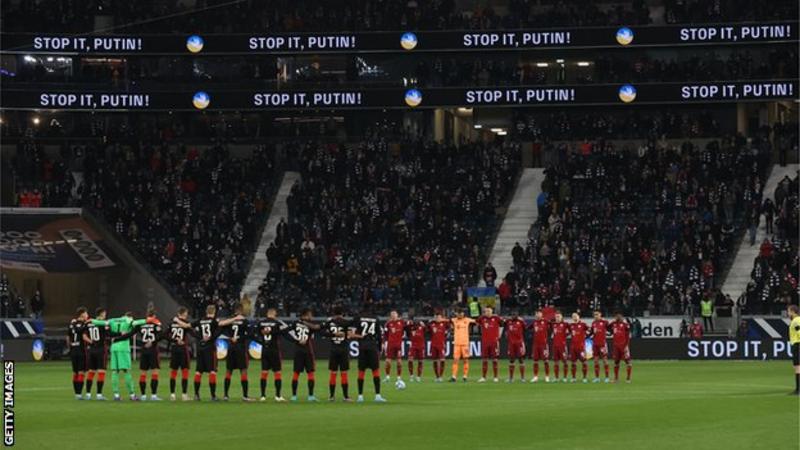 Several players have condemned the ongoing Russain offensive in Ukraine. On an Instagram story, Cristiano Ronaldo wrote: “We need to create a better world for our children. Praying for peace in our world.”

His club have also taken a firm stance against the ongoing atrocities in Ukraine ordered by Vladimir Putin, as United cut ties with Russian-owned airline sponsor Aeroflot on Friday.