Manchester City were held to a goalless draw by Crystal Palace on Monday night at Selhurst Park, giving optimism to Liverpool’s title chase.

As a consequence, City’s advantage over second-placed Liverpool is now four points, with Jurgen Klopp’s side facing Arsenal on March 16.

With Liverpool’s nearest competitors having closed the gap to three points with their victory against Brighton & Hove Albion on Saturday – their eighth consecutive league triumph – the onus was on the champions to react.

“Luck doesn’t exist in football,” Guardiola said after the match. “We have to score goals and we didn’t do it.

“We played to score goals and concede few. We struggled a little bit. The team that was there today, was there before and will be there in the next game. I am very pleased with the performance and the way we played.”

The Premier League leaders controlled possession in the first half, but Palace defended admirably when necessary, leaving Pep Guardiola’s side with little to show for their efforts as the opening 45 minutes ended goalless.

Kevin De Bruyne struck the post soon before the hour mark, and Riyad Mahrez forced a save with his follow-up attempt as the visitors continued to apply pressure to Palace. 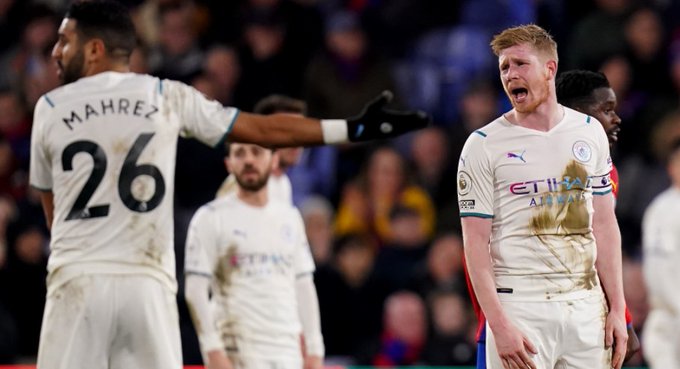 In the 71st minute, Jack Grealish delivered the ball across the face of goal for a waiting Bernardo Silva, but he was only able to get a toe on the pass, which skittered beyond the far post from close range.

The last Premier League club to deny City a goal was Palace in October, and another shutout appeared more possible as City’s opportunities continued to come and go.

Guardiola’s men threw everything at Palace late in the game, but the Eagles dug down and held on to extend their undefeated run to five games in all competitions and remain 11th.

“When you play against City you have to concede chances,” Palace manager Patrick Vieira said. “It’s all about having your luck on the day, but also putting in a shift as a team.

“We did that today. We fought for the luck and we got a point. We’re happy with the performance.”

On April 10, Manchester City will face Liverpool in a match that might determine who wins the Premier League in 2021-22.