Xavi Hernandez made a winning start as Barcelona coach on Saturday as a dubious Memphis Depay penalty was enough to defeat local rivals Espanyol 1-0 in La Liga.

Depay’s strike at the start of the second half ensured Xavi’s homecoming at Camp Nou ended in victory, but a nervy one, that will have left him under no illusions about the difficulty of the task ahead.

Raul de Tomas twice struck the post late on as Espanyol spurned a flurry of late chances that really should have seen them take a draw from a game Barca dominated for an hour and then almost let slip from their grasp.

Results, though, must come quickly and this one lifts Xavi’s team from ninth in the table to sixth, six points behind fourth-placed Atletico Madrid, who earlier needed a late Felipe header to win 1-0 at home to Osasuna. Sevilla, in third, were held to a 2-2 draw by Alaves.

There was also an undeniable uplift in mood at Camp Nou, with the 74,418 attendance almost double the 37,278 that watched Barca draw here against Alaves two weeks ago.

“They made things complicated for us in the last 15 minutes,” said Xavi. “We would have deserved 2-0 but it’s a good win to start the project.”

At his unveiling last week, Xavi had emphasised the need for “rules” and even before kick-off there were signs of a shift. The players rolled into Camp Nou under a plume of red smoke, with the squad arriving all together on the team bus. 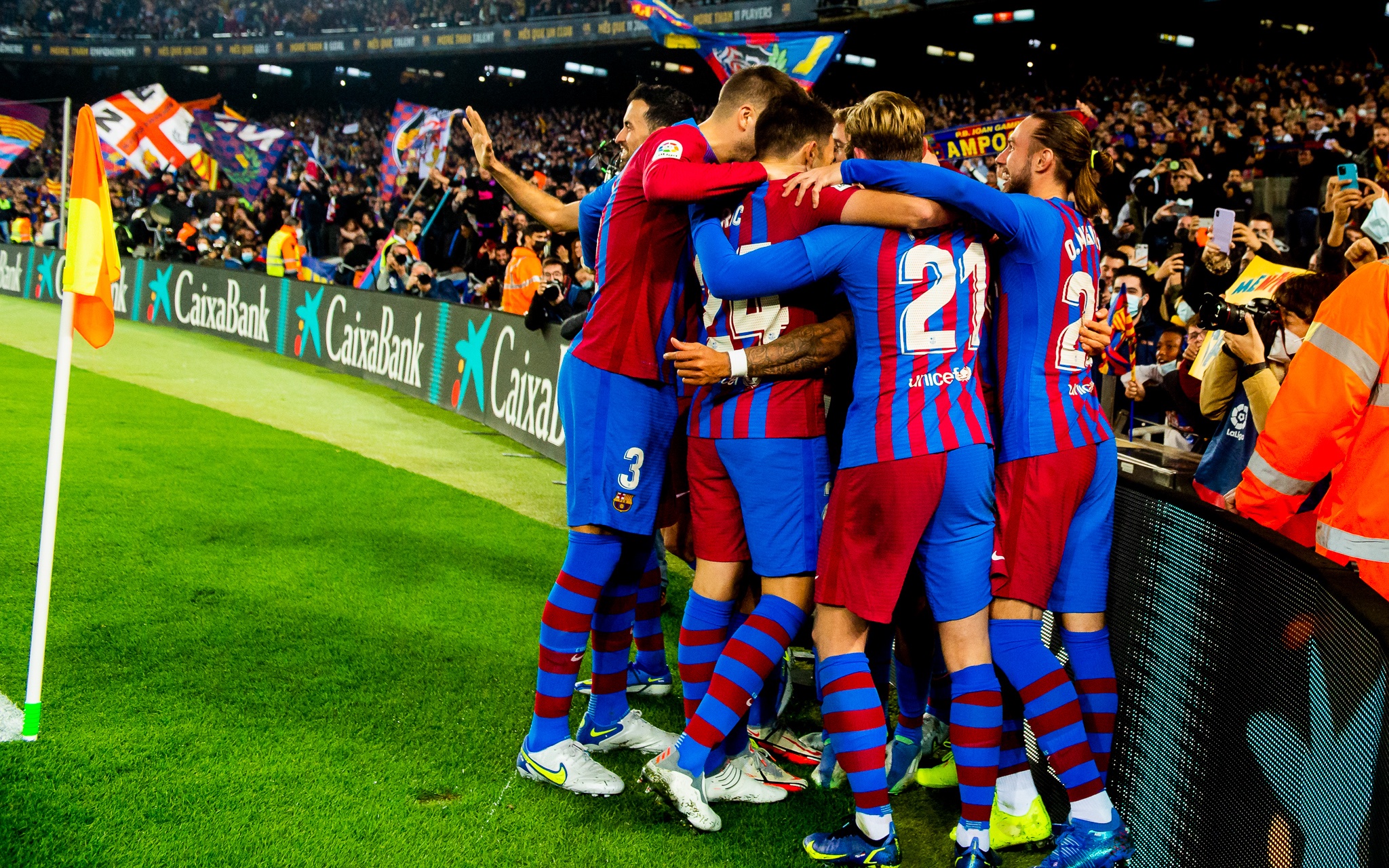 Barcelona’s XI boasted eight La Masia graduates, including Ilias Akhomach, who was handed his debut. Ilias was the second 17-year-old in Xavi’s first starting line-up along with Gavi and when he was replaced at half-time, on came the 19-year-old Abde Ezzalzouli.

In the warm-up, there was a more intense exercise of attack against defence and when Depay scored it was perhaps not just relief that saw all 10 outfield players celebrating together in the corner.

The football was faster and more fun. Barcelona’s players seemed liberated in the final third, where passes were flicked, scooped and backheeled. The best of them, by Gavi, led to Depay winning the penalty.

They started in a 4-3-3 with both Gavi and Ilias hugging the touchlines and stretching Espanyol’s defence out wide.

As well as the additional width, there was a clear intention to hunt the ball higher up the pitch. Barca were happy to leave defenders one against one at the back if it meant more players pressing Espanyol in their own half.

Nico almost scored when he stepped into to steal a pass from goalkeeper Diego Lopez but he looked, unsuccessfully, for a penalty instead of finishing.

There were 11 shots in the first 45 minutes and plenty of chances as Depay failed to catch an early volley before Ilias blazed over from close range.

The best spell of pressure came around the half-hour mark as Nico looked certain to score from Jordi Alba’s cutback but was denied and Depay was put through but his smashed shot was blocked by the chest of Lopez at the near post.

De Tomas almost punished some lethargic defending by Oscar Mingueza but the deflected finish was tipped over.

Ilias was replaced by Abde at half-time and less than a minute into the second half, Barcelona had a penalty, Depay going over after superb, heeled pass by Gavi. Leandro Cabrera clearly touched the ball but the decision stood and Depay made no mistake.

Abde almost scored a brilliant second after darting between two Espanyol defenders but without the cushion, Espanyol were always in the game and a flurry of chances followed.

A quick free-kick over the top again caught out Mingueza but De Tomas fired wide, before three openings came in five minutes.

De Tomas’ free-kick drew gasps when it shaved the outside of the post. Fran Merida was free three yards out but somehow headed wide. De Tomas headed towards goal, leaving goalkeeper Marc-Andre ter Stegen rooted, but again the ball hit the post.

Xavi threw on central defender Ronald Araujo for extra solidity. In the 96th minute, Wu Lei threw one last foot at a loose ball in the area but Ter Stegen, and Barca, held on.