Kevin de Bruyne has inspired Belgium to a comeback victory, cementing their place in the last 16.

Kevin de Bruyne returned with a match-turning performance in Belgium’s 2-1 win over Denmark that booked their spot in the last 16 of Euro 2020 as players and fans pay tribute to Danish midfielder Christian Eriksen, who is recovering from a cardiac arrest. 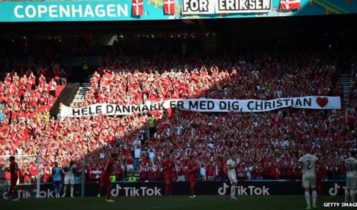 During the game and before,  players and supporters from Denmark and Belgium joined together to show tribute to Denmark’s talismanic number 10. Referee Bjorn Kuipers halt the game in the tenth minute for emotional one-minute applause.

De Bruyn, who missed Belgium’s 3-0 win against Russia due to a nose bone fracture, recovered and made a goalscoring return in Copenhagen on Thursday.

Yussuf Poulsen gave a dream start to the hosts in the second minute of the game following a mistake in Belgium’s defense, but Thorgan Hazard equalized for Belgium nine minutes into the second half from De Bruyne’s assist.

The Manchester City midfielder scored the winner later in the 70th minute of the game with a brilliant shot from the corner of the penalty area. Martin Braithwaite went so close to a late draw for Denmark but his header moves to the top of the bar.

After the victory, Belgium became the top of the group with six points with one game remains to play.

“Obviously it’s a big ask to come on at half-time and be able to affect the game the way he did it.

“It’s not just about talent, it’s also about his know-how, and the way he played in the second half he didn’t look like a player that has been through a surgery, that has been away from the football pitch.

“This was a very impressive way for a player who has been away for a long time to introduce himself and affect the game in that way,” Martinez told reporters

Kevin De Bruyne fractured his nose and eye socket during the UEFA Champions League final on May 29.

A little over two weeks later, he needed just 45 minutes to grab a goal and assist for Belgium's comeback victory vs. Denmark in his Euro debut. 💪

Belgium faces Finland in their last match in the group stage, while Denmark face Russia on another match on Tuesday

Sweden edge past Slovakia thanks to Forsberg penalty