“My first World Cup experience was 2002 South Korea Japan edition. The Turks, Koreans and the Senegalese of then will be among the favourite memories of every 90 born child”, perhaps this would have been the opening sentence of this article if I wrote it a few weeks back. But this World Cup proved it wrong for me. So let it be a one-word beginner, “ Croatia”.

Some campaigns will be unforgettable in our football memories, the long stories from Nottingham Forest to Leicester city, many more known and unknown, in every nook and corner of the world where the game is being played. This unexpectedness in this game will keep on entertaining not every fan, but any onlooker, like a multi-sequel movie, where each part betters the other, like the Foxes’ journey from the second tier to the most wanted crown of club football, Monaco’s triumph in the champions league an year ago, The Greek heroics of 2004, Roger Milla’s Cameroon , Hakan Sukur’s Turkey, Atletico Madrid’s challenging of a decade-long Barcelona Real Madrid dominance in La Liga and many more.

Such a journey is for Real Kashmir FC in India, from the blood spilt summer curfews and the snow-covered another half season, the team is full set for their voyage in Indian football’s top division league. Real Kashmir FC has promoted to I League first division after being the champions in the second division, thus becoming the first team from the state to play the top tier of Indian football league.

The football stories in the paradise date back to the British colonial period. The credit of its introduction is mostly attributed to Tyndale Biscoe, the founder of mission school at Srinagar in the last decades of the nineteenth century. It’s said when Biscoe first time introduced the football in CMS School, Fateh Kadal, the students refused to play the game as the ball is made of leather and Brahmins can’t touch it, from where the football has grown as the most popular game in the valley at the beginning of the twentieth century, and its golden era with rich local football culture remained till the eighties.

Like any other sports, the post-eighties disturbances have affected the football to lose its glory in Kashmir. Abdul Majid Kakroo, the defender who donned the armband for the Indian team in 1987 Nehru cup at Calicut, was the last spark of that glory. 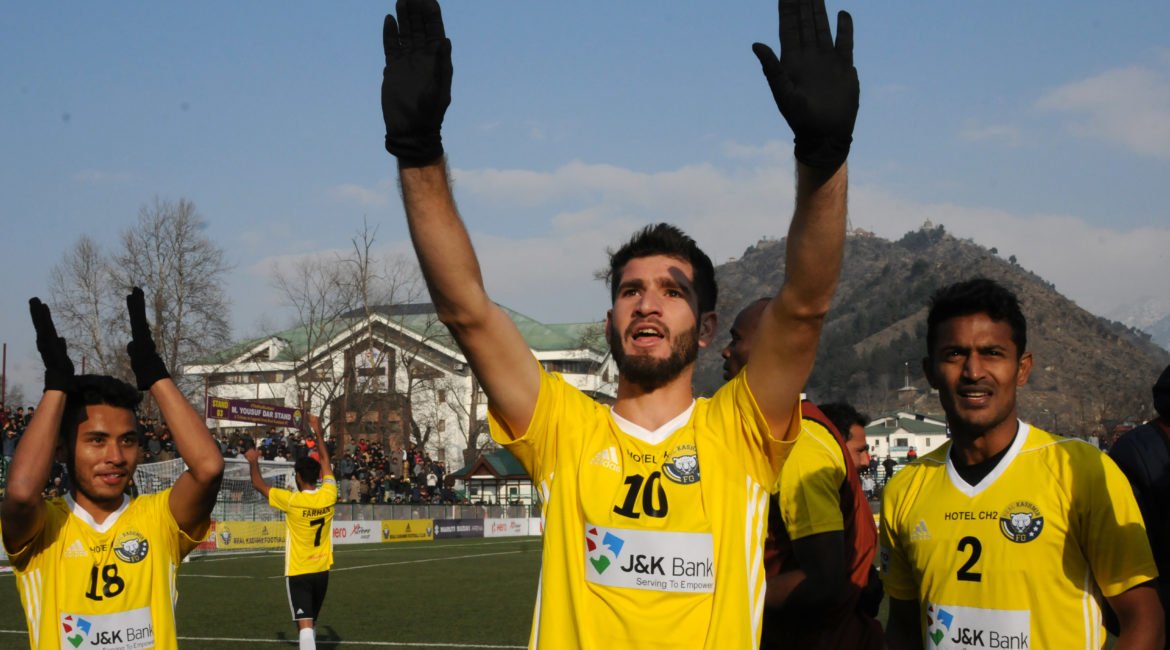 The glimpse to the revival of this lost glory of Kashmir football came in 2005 SAFF cup final, when another defender headed the ball to Bangladesh’s net, to break the deadlock in India’s journey to regain the championship. Mehrajudheen Wadoo, one of the best Indian defender of the present era, remained to be the address of Jammu and Kashmir in Indian football for more than a decade. Mehraj has a notable presence in Indian football, appearing in 32 caps for the international side. Mehraj has also played for many major clubs in Indian football, East Bengal, Mohun Bagan, Mohammadens, Salgaocar, Chennaiyin FC, FC Pune City, Mumbai City FC etc. playing a part in their successes.

Wadoo was the part of Indian national team in their two successful Nehru cup runs. Wadoo also played a significant role in Chennayin FC’s ISL championship in the second season of the tournament. It was a few days after Mehrajudheen Wadoo held football coaching camp in Srinagar, an effort for upbringing the football academies in the state, in the summer of 2016, Burhan Wani, was killed by the Indian army lead to the months-long unrest and curfew in the valley. Meantime, another Meraj was taking an unregistered football club to one of the oldest football tournaments in the world.

Kashmir’s football revival is an excellent drive from one player to a team, happened through another Meraj. Some years back, Shamim Meraj, the editor of Kashmir Monitor, had nothing in hand other than a dream of “an East Bengal of north India”. The idea came true when he joined hands with his friend Sandip Chattoo. Real Kashmir FC started its professional football journey when they took part in 128th Durand cup in 2016. Even they couldn’t achieve anything remarkable in their debut tournament; they were able to set their route map. 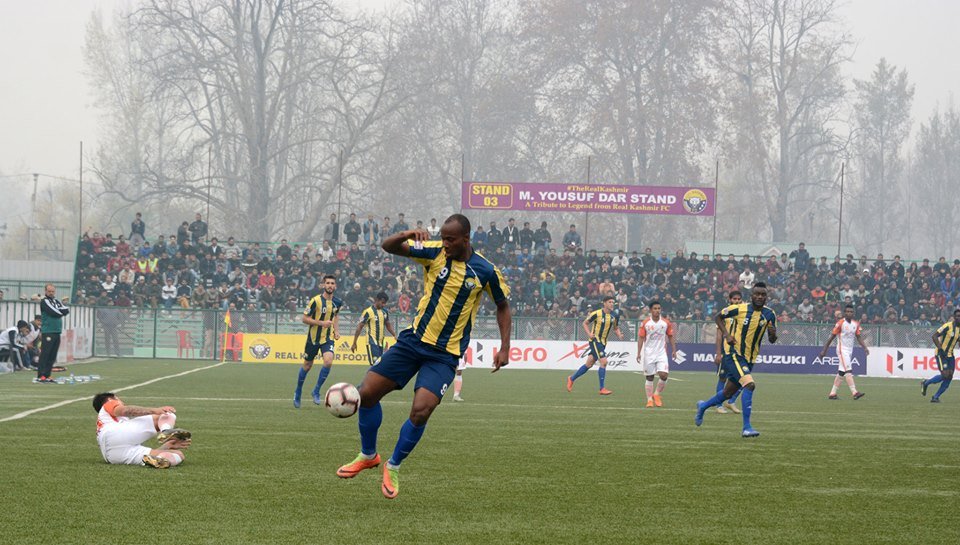 The search for a coach ended up in David Robertson, the manager of Phoenix FC, an American professional soccer team. Robertson was the player of Rangers, Leeds United, Aberdeen and also represented Scotland national team. Real Kashmir spread their wings under the new Uefa Pro licensed trainer. He taught them to fly in the new skies of hopes and possibilities. Robertson took the team to Scotland for better experiences, rather than targeting big names; he aimed to make the available names big.

Real Kashmir FC ended up in the third position in the group stages of their first I League second division tournament, but the introduction of two foreign players worked for the team in their second season. The team boosted up having Loveday Enyinnaya as their captain. The well experienced Nigerian defender joined the team to the new heights. Loveday started his career in India for Malabar United FC in 2010 and had an incredible season with Minerva Punjab FC when the team became the first ever north Indian side to be the I League first division champions in 2017-18. Previously, he played a significant role in securing the I league qualification for the Meghalaya side Royal Wahingdoh FC in 2014-15.

The Ivory Coast forward Kouassi Bernard Yao along with the local talents shocked the opponents this time. From Bangalore, they flew back to the valley with champion’s crown and the ticket to the next year’s I League first division, making them the first Kashmiri team to play the top division of Indian football league.

Real Kashmir FC was the champion in Group A in the second division, with six wins and four draws, without any loss. In the final round, Real Kashmir had to face the strongest sides of the league. Hindustan FC of Delhi, Ozone FC from Bengaluru and Tiddim Road Atletic Union from Manipur. The first-timers started the final round being victorious over Ozone Fc scoring three goals against two. The team walked to the I league first division by repeating the same scenario versus Hindustan FC in their final match even though they drew with the Manipur side by two goals in their second match.

Robertson’s discovery of the local boys, Muhammad Hammad, Danish Farooq and Ritwik Kumar Das was crucial for the team’s title hunt, where both the midfielders Danish and Ritwik, added four goals to their name to get into the top scorer’s list. Hammad partnered with Loveday and Abhash Thapa to make the most vigorous defence in the tournament, especially in the group matches. The Kashmiri side also secured goals through Atinder Mani, Ifham Tariq, Koassi Yao, where the forward trio has successfully partnered in scoring four goals each.

Danish Farooq, son of legendary footballer Farooq Ahmed Bhat, former hero of Mohammedan Sporting, set the game in the middle. Scoring and setting up the goals, Danish is turning out to be the target for big fishes in Indian football market.

Nadong Bhutia was another big catch for the team from Minerva Punjab. Even though he couldn’t appear in a single match for the Punjab side after joining in the middle of the last season, he seemed to be the saviour for the Kashmiris in the final rounds. Bhutia, who appeared only in the three final round matches, netted two goals in his name. One of them came in the ending moments against TRAU in their second match, clearing team’s way to the first spot.

Real Kashmir FC paved the comeback way for the former ISL winger of Mumbai and Kolkata, after the injury-torn years.

The second decade of the twenty-first century is witnessing a new sunrise in the valley, the formation of professional football clubs like, Lone star Kashmir F C and Real Kashmir FC are bringing around the football culture. In the previous season, TRC Turf Ground of Srinagar, the home ground for the both the I League clubs from Kashmir witnessed the highest spectator outcome after Jamshedpur in the second division I League.

From the valley, Real Kashmir F C has climbed the craggy mountain; with many amateur or semi-professional footballers, who turn daily wage labors outside the stadiums; Through the curfews where the players have to get through number of checkpoints before their first touch to the ball; in the shutdowns , where the players miss their training sessions; with only one available stadium to be shared by different teams, many times forced to train in no-post no-grass no-mark grounds in their neighborhoods ; with their determination, they have planted the champions’ flag on the top of it.

Now they are going to face new challenges. They are going to walk through the same tunnels of Calicut stadium , where the ‘lion of Kashmir’ Abdul Majid Kakroo took off the captain’s armband. They will host the big blocks of Indian football in the ‘paradise’. The place which is always addressed for its violence by the outsiders, with a team having sixteen ‘out of sate’ players, will rewrite its address, from violence to the paradise of Indian football.

This story was first published in First Post. This is reproduced with writer consent.