Real Madrid staged one of the great Champions League comebacks on Wednesday, with Karim Benzema scoring a stunning hat-trick to upstage Kylian Mbappe and knock Paris Saint-Germain out of the competition.

Madrid seemed destined to become the next victims of another Mbappe masterclass at the Santiago Bernabeu after the 23-year-old wore them down for the better part of an hour and blasted in to give PSG a 1-0 lead on the night and a 2-0 aggregate lead.

However, Madrid stormed back as Benzema seized on a mistake by PSG goalkeeper Gianluigi Donnarumma and then scored an unbelievable double in the space of two minutes, the third coming just 11 seconds after PSG kicked off.

When the final whistle blew to seal Madrid’s 3-2 aggregate triumph, many of their players sank to their knees and stared up to the sky, presumably in surprise as much as delight.

All eyes were on Mbappe, who was the lone player cheered on by Madrid fans before to the game, as they were given an up-close look at the player they hope to sign this summer.

Mbappe delivered, scoring a spectacular goal as well as a captivating second goal that was disallowed for offside when he bamboozled Thibaut Courtois with a stunning dummy-finish.

It’s possible he wasn’t even 100 percent here after a knock in training on Monday put his participation in jeopardy.

But what appeared to be a demonstration of the world’s deadliest player turned out to be another incredible European night for Real Madrid, who demonstrated once again why they regard this as their competition.

Madrid definitely sought to attack PSG hard from the outset, with Dani Carvajal leaping and flailing his fists at the fans to create a tsunami of noise.

It worked for a moment, with Vinicius Junior blasting down the left and Fede Valverde bulldozing through Mbappe, but the surge was fleeting. PSG snuffed off Madrid’s impetus, pushed them back, and seized total control.

In the eighth minute, Mbappe broke free for the first time, with Neymar looping a pass into the space on the left. The stadium held their breath as Mbappe created space, only to collide with Courtois.

Madrid fell out but relinquished control. Mbappe snuck by Eder Militao, and Courtois came up with the save. Neymar had a chance to score after a great interplay between Lionel Messi and Marco Verratti, but Courtois was there again.

PSG were now at ease, commanding play and sensing the apprehension. Madrid had chances, with Benzema curling narrowly wide, but they were slower, heavier, and more ponderous all over the pitch.

Messi slipped through and scooped wide before Mbappe’s first of two goals was called out after driving into the corner and seeing the flag raised.

The goal, on the other hand, seemed unavoidable, and it arrived in the 39th minute. With Madrid committed, Neymar arced another great pass over the top after Carvajal fumbled the ball upfield.

Mbappe had just David Alaba in front of him by the time he arrived, and as he shaped to bend into the far corner, he instead struck early, blasting a devastating shot past Courtois and inside the near post.

Madrid attempted a comeback at halftime, but Mbappe continued where he left off with a stunning, but disallowed, goal.

He deceived Courtois with an incredible fake shot, beating the Belgian without barely touching the ball and slamming home. The flag was raised, but the stadium was stunned.

Modric shines as Messi and Neymar fail to Inspire

The game was becoming less of a match and more of a Mbappe show until Benzema sprang out of nowhere and hauled Madrid back into the tie.

He followed Nuno Mendes’ backpass to Donnarumma, who skewed under duress. Vinicius collected and cut back to Benzema, who slotted home. 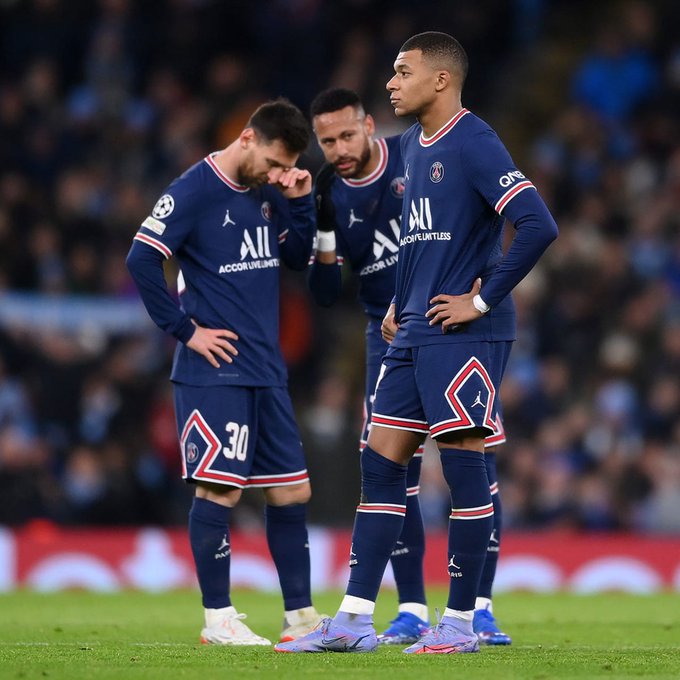 Suddenly, there was hope again, with the fans cheering Madrid on. When the ball was graciously cannoned to Vinicius in the box, he fired over. Messi was chased down by Luka Modric, who slipped him into touch.

Modric was also the inspiration for Madrid’s second goal, a brilliant move through midfield that allowed Vinicius to gallop free down the left. He snatched the ball back inside to Modric, whose superb reverse pass found Benzema, who finished.

Madrid were level on aggregate, with the goal confirmed by VAR. Then, miraculously, they were ahead after only eight seconds. PSG wasted control from the start, with Rodrygo releasing Vinicius and Marquinhos’ attempted clearing falling to Benzema, who drove into the corner.

“This is how Madrid wins,” the supporters began to chant. They became silent when Messi stood over a free-kick in injury time, but when the ball curled over, the applause resumed.