Kurt Zouma’s abuse of his pet cat in a viral video and its angry reactions have exposed the double standard and the hypocrisy of the white British media and other stakeholders once again. Amidst the ongoing condemnation spree, critics have started to question the integrity of the authorities and intentions behind the disproportionate handling of the issue.

In a sharp reaction, West Ham star Michail Antonio has questioned whether his teammate Kurt Zouma’s mistreatment of his cat is “worse than racism”.

The France defender has been facing widespread condemnation following the release of a video showing him dropping, kicking, and slapping the pet. He has now apologised and been fined two weeks’ pay — an amount believed to be in the region of £250,000 – in addition to losing his Adidas sponsorship agreement.

As a cat owner, Kurt Zouma’s abuse of his pet has made me feel physically sick tonight.
How could someone treat their animal like this for sport and cheap laughs?
He must never own a cat again. pic.twitter.com/tV905qI6pR

Zouma is under investigation by the RSPCA, who took back his two cats, following which two of West Ham’s sponsors withdrew their support for the team. West Ham manager David Moyes is facing heavy criticism for standing by the player who started him in the last league game against Watford, where the player was jeered throughout the match.

When asked about the incident during a Sky Sports interview, Antonio stated that while he did not condone Zouma’s behaviour, he believed a larger discussion was to be had.

“I’ve got a question for you. Do you think what he’s done is worse than racism?” Antonio said. “I’m not condoning a thing that he’s done, I don’t agree with what he has done at all. But there’s people that have been convicted and been caught for racism, and have played football afterwards. They got an eight-game punishment or something like that, but people are now calling for people to be sacked, for them to lose their livelihood.”

🗣 "I've got a question for you… do you think what he's done is worse than racism?"

Michail Antonio gives a powerful response when asked about the situation at West Ham with Kurt Zouma.

Zouma’s younger brother Yoan, who shot the video, is also punished as he would be barred from playing for his club Dagenham & Redbridge until the RSPCA completes its investigation. The player has expressed deep regrets for his role. “Any further action deemed necessary to be taken will be made at the conclusion of the RSPCA investigation,” the National League club said.

Experience Kissimmee, the tourism authority for Osceola County, Florida, has been reconsidering its ties with West Ham following Zouma’s selection to start Tuesday’s match against Watford following the viral video.

“Experience Kissimmee announced today that it has ended its sponsorship of West Ham United Football Club,” the club’s destination partner said in a tweet.

West Ham’s health partner, Vitality, had discontinued its sponsorship, stating that it was “very dissatisfied” with the club’s response to the video. It stated that it would be “engaging with the club to ascertain the course of action they intend to take.”

Racist Agenda behind ostracisation of Zouma?

Several Twitter handles and critics have raised concerns about the disproportionate punishment of the French player of black origin. The racism and double standards of the British press and companies like Adidas have been called out once again.

In the controversy, the critics see elements of the systemic racism which has plagued European football for a while. It was before a few months that Chelsea’s champions league hero Edouard Mendy slammed the disgraceful case of mistaken identity calling out the racist mentality of the European press and terming it ‘highly symbolic’ when the player’s image was used in stories about Manchester City’s Benjamin Mendy’s rape case.

“Sad to see that in 2021, in France as well as in England, for some, black people have neither names nor distinct faces,” the Senegal international wrote on Instagram at that time. Ferland Mendy of Real Madrid was also a victim of mistaken identity in this episode.

Surprisingly neither Chelsea, Real Madrid nor any European football body has supported the players during this outright violence. No white superstar came in solidarity with the players. 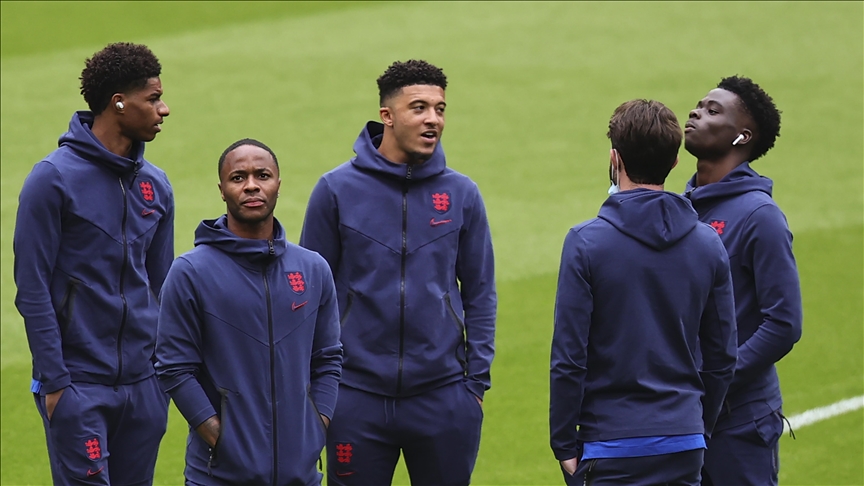 In 2019, Kurt Zouma himself suffered racist abuse on Twitter after comments were directed at the Chelsea defender following his own goal in the 2-2 draw with Sheffield United.

There was no concrete action taken against the offenders in these incidents, or the football world didn’t raise a united solidarity beyond the symbolic gestures of taking the knee before the Premier League matches.

The critics also point out recent incidents involving white players with no such reactions or punishments.

Harry Maguire was found guilty of aggravated assault, resisting arrest and attempted bribery in August 2020 following a holiday in Greece, but the player is still the captain of Manchester United, and Adidas still sponsor them.

In 2011 Marcos Alonso was arrested for drunk driving in Madrid. The Spaniard crashed his car into a wall that killed one of his passengers, a 22-year-old woman, and injured three others in the car. The player didn’t spend a day in prison and is still earning millions at Chelsea.

Eden Hazard, who kicked and assaulted a minor ballboy in 2013, never lost a sponsorship deal and continued to be a superstar in Chelsea until his transfer to Real Madrid and Adidas still has no problem with the player.

Perfect time to remind us all that
1. Eden Hazard kicked a teenager and got away with just 3 matches ban.
2. Suarez got fined £40k for racism never lost his sponsorship.#BlackLivesMatter #BlackHistoryMonth pic.twitter.com/lZRF40Uz1n

Mesut Ozil’s treatment from Arsenal and German football is also a classic case of British and European double standards.

Ozil had criticised Arsenal’s unwillingness to support him after his comments about the persecution of Uighur Muslims in China and called on the club to say Muslim Lives Matter, too.

In December 2019, Ozil spoke out strongly on Instagram against China’s treatment of the Uighur population in the north-western region of Xinjiang, where over a million people have reportedly been held in detention camps over recent years.

Arsenal didn’t support the player, but they outrightly distanced themselves from the issue, fearing the loss of the Chinese market and companies like Adidas still do business with Chinese stakeholders.

The critics also point out Luis Suarez’s infamous racial abuse of Patrice Evra along with several similar incidents to show the bias of the English Press.

The Zouma episode has clearly divided the football world and the racism debate in European football especially in England has taken another shift.