The story of Askarali Vadukunnera is inspiring from its very core. Born to Aysha and Kunju Muhammed on October 8th, 1979, a young Askarali was proficient in many fields. Starting from his school days, Askarali proved his adeptness in studies and sports equally. He efficiently led the role as the head boy of EMEA Higher Secondary School, Kondotty from 8th to 10th grades. However, his true passion always lay in sports. He was a part of the school football team, a district level champion in the high jump, long jump, discus throw and in shot put. More than once he was adjudged the school individual champion, a matter of great honour among his schoolmates at the time.

Being supremely talented and famed at a young age, Askarali was definitely a household name in the area. Mainly because football is a frenzy for people in Malappuram, where clubs and sevens football seasons feed the drive of players and fans alike. Askarali was one of the best players who represented EMEA college. It was in his second year of club football that the tragedy struck Askarali which left him with a big question mark on the future.

The footballing prodigy was clipped off his wings by an odious foul, in 2006, while playing for Akshara Club in Arimbra. He was elbowed by an opponent and suffered a severe injury to the spinal cord which left him with one side paralyzed and a permanently damaged vocal cord.

In the years that followed, he was even diagnosed with a brain tumour, but being the fighter that he is, he survived, and till this day lives by the motto “A winner never gives up.”

Despite the tribulations, even fate folded its knees before this resolute and ebullient man.

Soon Askarali started his own football academy, called KFM Club, which even laid the foundation for many renowned football players like Anas Edathodika, who plays Centre Back for ATK Mohun Bagan FC and the Indian national team. 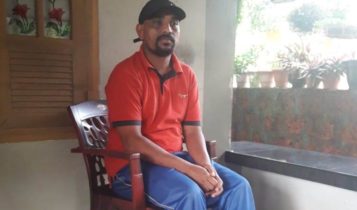 Football is undeniably an interplay of energy, effusiveness and uninhibited enthusiasm. Askarali’s character would never waiver from these very principles. Askarali could never go back to playing football, but he never gave up, let alone brood over his shortcomings.

“If we have a dream and truly believe in it, work hard for it, and never give up- nothing is impossible.” says this sanguine Askarali Vadukunnera.

Currently, Askarali leads a satisfying life with great support from his wife Sabna and his four children, Fahma, Adnan and twin sons. He hopes to fulfil his dreams through his son Adnan who is equally passionate about the game as his father and is presently training under KYDF Club, Malappuram, Kerala.

Femi Theres is an aspiring journalism student who lives in the hub of football fans in Kondotty, Malappuram.