A joinder or on FIFA and Human rights

It’s almost a fortnight since Russia launched their invasion of neighbouring Ukraine due to the geopolitical tensions. A war on a sovereign nation by another. Aggression that’s condemnable considering the very standards and norms of international justice and law. The blitzkrieg hasn’t ceased completely as we talk, and the world nations and human rights organizations continue to condemn and inflict damage upon Moscow for the cessation of bloodshed by imposing economic sanctions, bans and boycotts of everything Russian. Even the long-gone great novelist Fyodor Dostoyevsky and world-renowned conductor Valery Gergiev is not free from the shackles of cultural boycott. While one can squabble over the exigency of such serrated impositions, FIFA and UEFA, the central football bodies, have instigated their share of condemnation through the ban of Russia and all Russian clubs from all International Competitions. A complete washout from participation. That means no World Cup, no Champions League, no nothing until “further notice”. Now the Russian Football Federation is about to file a lawsuit and an appeal to the Court of Arbitration for Sport (CAS) against the decisions by FIFA and UEFA. 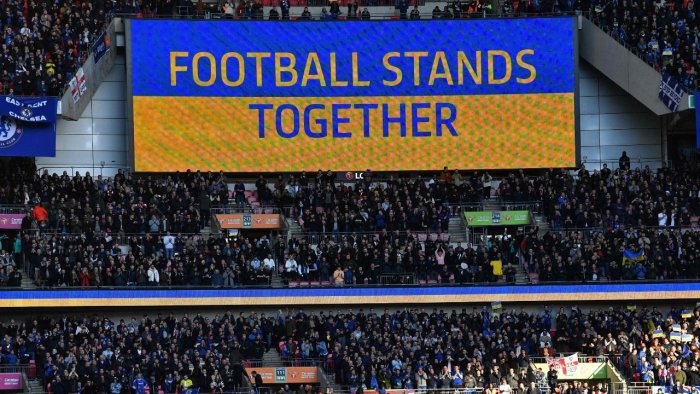 Nonetheless, even if unprecedented due to its suddenness and steadfastness, putting aside the political differences, such a move appears laudatory as football by its very spirit, design, participation, and sportsmanship stands up against all forms of violence and discrimination and disgusting behaviour. The game has always demonstrated its power in surpassing borders and nationalities: to unite nations as equals on the field of play and unite fans from many more countries behind improbable victories and noble struggles. In short, football demonstrates how a sport can demonstrate as a commanding emissary of peace.

But sadly, all that football stands for doesn’t necessarily translate or reflect on its governing body, FIFA and UEFA. Like any opportunity, it only counts if we take advantage of it. Undoubtedly, the primary responsibility lies in the governing bodies themselves. If the game does deviate into ugly and regressive phases, they are the ones who should intervene at the right time through the suitable measures to combat them. The real courage lies when they could intervene or act in solidarity even in human rights issues that happen after the 90 minute whistle as in the Ukraine scenario. There isn’t a nation or people that football hasn’t touched, and vice-versa. But do FIFA and UEFA reserve equal weight in confronting all their problems? Are strong patterns of actions or coordination visible among FIFA and UEFA against regressive acts of violence like racism, Xenophobia, Anti-Muslim bigotry and hooliganism? A big ‘no’ says the reality. 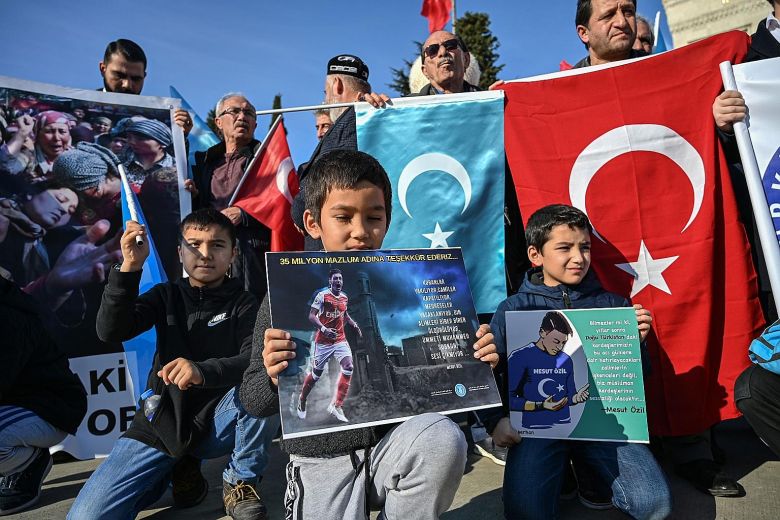 Contrasting principles and hypocrisy are nothing new to FIFA and UEFA. Ideals often cherished for a long time occasionally rises as their proud slogans. The current Ukraine tragedy has shown us that FIFA can indeed act. So can UEFA. Apart from the International ban and outright condemnation, players and fans alike were allowed to project their Anti-war emotion and irrevocable support for the Ukrainians inside the green turfs. Jerseys, armbands, flags, banners, anthems, slogans – support rained over in every form and shape possible. An admirable case of harmony and solidarity where the whole stadium turns blue and yellow. Appreciable in every sense because human lives and rights matter.  But wait, do all lives matter? Is everyone treasured and valued just like the White Europeans? Does every act of aggression and violence attract equal and same condemnation? Does it?

In May 2021, when the Irish Celtic fans put the Palestine flags on display at Parkhead in solidarity with the thousands of innocent Palestinians amid the then-ongoing violence in the Middle East, UEFA deemed their act as “unacceptable” and termed the banners and flags as “illicit”. And if you think that’s all there was to it, you are mistaken. Not only had the flags and banners removed, but a huge fine was imposed on the club over their act of solidarity. And this wasn’t a one case scenario. Two years before that, the club was fined more than £15,000 after a Palestinian flag was displayed at a Champions League qualifier against KR Reykjavik. Keep “politics out of Football”, UEFA said. Yeah, that says a lot. 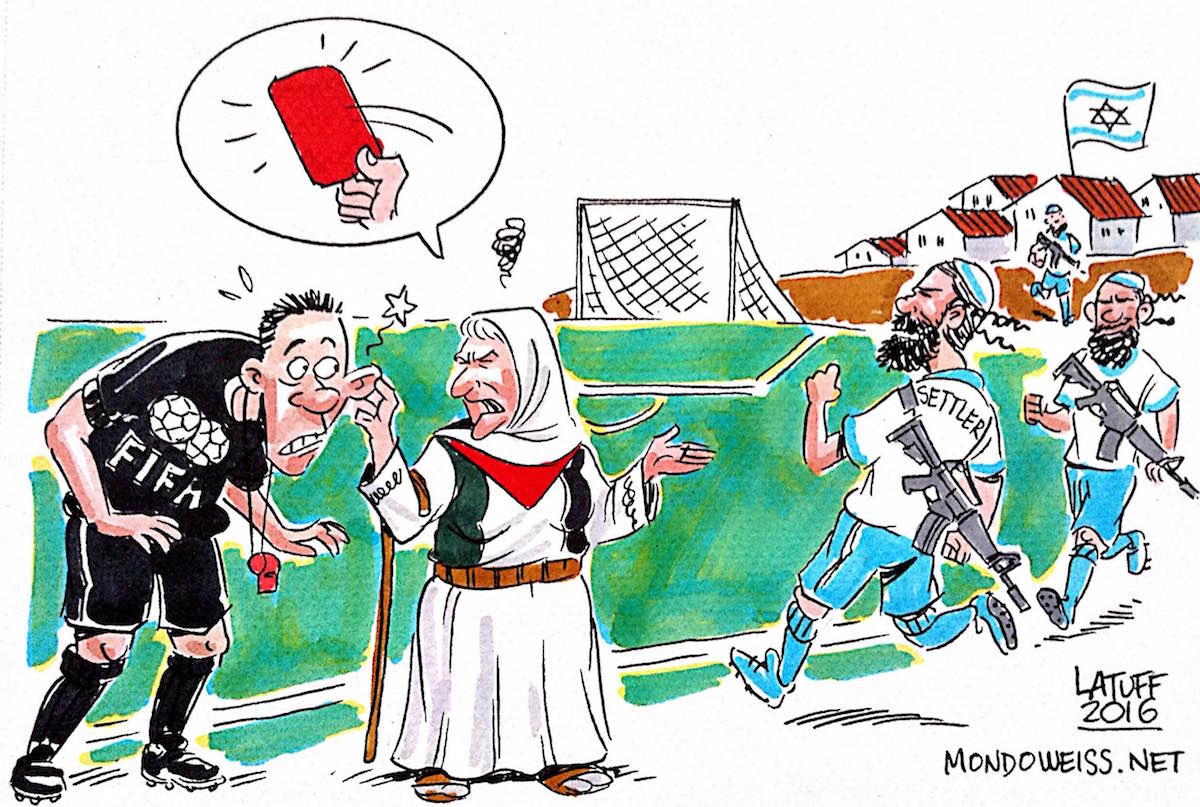 Now let’s forget the oppressed. What about the oppressor? Are Israel and Israeli clubs banned from International football, due to their country’s horrific crimes against humanity, for functioning as an apartheid state like Amnesty International stated? Is the United States banned for their barbarous imperialism across the world? It was before few years ago that FIFA banned the head of the Palestinian Football Association, Jibril Rajoub, from attending FIFA games for one year and fined him $20,000 for alleged incitement. Punishing Palestine and disregarding all Israeli repressive measures against Palestinian sports and athletes was definitely a blatant double standard.

If Israel is not banned or called out for their illegal occupation, we should ask the question ourselves. Why? Because sadly, the answer is not all lives matter. War in the Middle East and the African continent are not wars but a third world “peacemaking” process. Lives lost in the Global South don’t account for human beings but are deemed as mere statistics. Human rights of the black, brown and Asian people remain wrapped in the garb of “just politics” forever. Irony died a natural death long ago.

Now, if you think I’m getting too political or these are lame “off-pitch rants”, let me take you to the stands and try to watch a match. How does FIFA and UEFA deal with racism? Be it from the fans, players, coaches, or match officials. What stance do they embark on when such evil exhibitions happen inside the four corners? The thought that comes to your mind answers my question. It’s too little that we feel we’ve discussed racism more than them.

Let’s not dig in too deep to glance at a couple of examples where we can witness how insufficient and ludicrous their actions are. Let’s walk the walk of Balotelli, Lukaku, Sterling, Alves, Demba Ba etc., to name a few. Or let’s take the example of the Euro 20 final when a group of supporters abused black players like Bukayo Saka, Marcus Rashford and Jadon Sancho for missing the penalty. Or the one after the Euro where an entire stadium of Hungary fans booed the same English players. Be it monkey chants, death threats, severely abusive and grossly offensive rants etc., all these dehumanization and humiliation for what? For being black! And with a high sense of contempt and utmost disappointment, the reality reveals that the only conspicuous mishap where Fifa intervened with adequate punitive measures was the Euro 2020 incident. That too because of the wide attention that the incident garnered. Rest all untouched, barely touched, or “we’ll look into it”.

Indeed, FIFA or UEFA shouldn’t own up to the phenomenon of racism because it’s not a thing that’s manufactured inside the stadiums but instead perpetrated within the society where such “private” spaces like stadiums are deemed fundamental to the politically-aligned cliques. They offered the most extreme members space to increase their violent mottoes and testaments. Not only racism but Anti-Semitism, Anti-Muslim bigotry, Xenophobia and the hatred against homosexual people community are all in the same bucket functioning the same way, waiting to be treated or even barely acknowledged in some cases.

Need of a coordinated effort

When social tragedies such as the above mentioned occur, there is uproar across news outlets and social media that might last for days, maybe even weeks. But then they become fleeting moments of social upheaval but rarely develop into any substantial changes in sporting policy. That’s where the dilemma lies. Report racism, and then what? All the way down, Fifa boasts of ‘no room for racism’, equality, anti-discrimination and all that recurrently. But those words don’t translate to real-life policies and actions, making them hollow. I am not in denial of the changes and efforts over time, but only stating that they aren’t enough or satisfactory.

However, sincere Anti-racist, anti-discriminatory organizations and educational charities work with the Football community, like ‘Kick it Out, “Show Racism the Red Card’, ‘Fare Network’ etc., that work with utmost determination to bring a change inside the turf and within society. But even despite their integrated efforts, leagues like Serie A and Premier League regularly witness the horrors mentioned above. Italian league Serie A is the worst when it comes to racism. 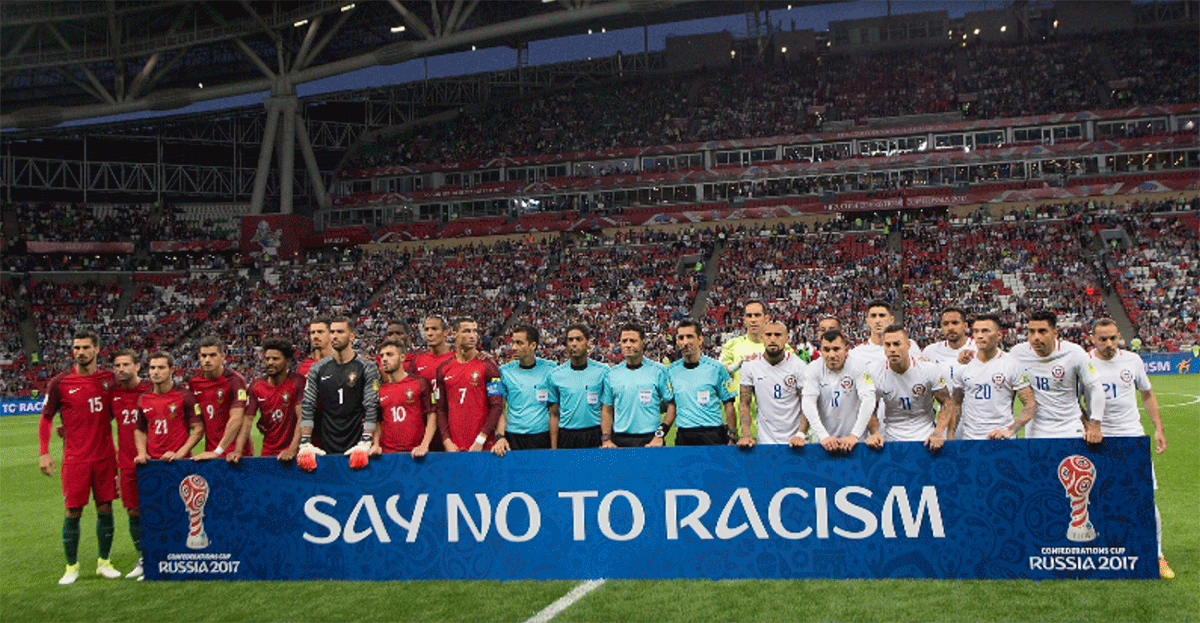 Therefore, we seriously need to create a culture and a mechanism that is aware that reporting leads to action. The action means people misbehaving will not be welcome in the stadium and will not watch the football match. Those indulging in such heinous atrocities should be brought to the limelight, alienated and punished strictly without much delay and thought. No one should maintain the false conviction that they will go unpunished even if they exhibit any form of physical or verbal maliciousness onto others.

But no matter the amount of discussion, measures and actions hitherto communicated are only worth it if it’s implemented most effectively and transparently without delay. Time of reaction carry equal weight in this regard as justice delayed is often justice denied. No black players should feel alienated, alone and devoid of hope once they face humiliation during a match. His or her co-players, club officials, match officials, and the other fans on the stand should react in solidarity against the perpetrators alike until the offender is shown the way out of the stadium or the match stopped abruptly altogether. Let’s restart the same depending upon the robustness of the rectification measures.

How to tackle this?

Finally, to enact these measures in reality, FIFA and UEFA should come together and strengthen their coordination with the media, online & offline legislations (at the local and national level), anti-racist organizations and charities alike without fail. Moving forward, anti-racist organizations like ‘Kick it out’ should be supported morally and financially as they are specifically designed and intended to combat racism more efficiently. The number and presence of stewards should also meet the planned requirements along the line of strengthening and training them to maximum productiveness. Working well with the Social media giants like Twitter, Instagram and Facebook is also an important step towards combating hate online as more people now are taking it on to their private digital spaces bearing in mind the advantage of relative anonymity to spew hatred.  Last not but least, Media houses should and must make ‘representational diversity’ a motto as it very well sparks a massive influence on the public as to how the minority players are represented. In the end, all these suggestions are not new, the last or unalterable, but rather a punch to the selective amnesia of FIFA and UEFA and a sharp reminder that there are whole lots of anomalies lingering and promises that require unravelling.

A General Reflection on Football and Significations: Brazil, Messi and Image Making…

The Black horses of the Qatar World Cup 2022