How Leipzig Found Their Wings: Story of a Vision

A decade ago, nobody had heard of the club RB Leipzig. From playing in the fifth-tier of German football to reaching the Bundesliga to being Champions League semi-finalists all in just about 9 years, this “new-age” club has raised a lot of eyebrows due to their incredible success in such a short term.

The origin of the club begins with the acquisition of SSV Markranstadt by the Austrian energy drink manufacturer Red Bull. This wasn’t Red Bull’s first venture in the field of football. They’d already made their entry into the football industry via FC Red Bull Salzburg in Austria. Red Bull presently have several clubs playing top-tier football in various parts of the world. FC Redbull Salzburg in Austria, New York Red Bulls in the MLS, Red Bull Bragantino in Brazil are other clubs owned by the business conglomerate. All of these football clubs presently act as ‘feeder’ clubs for their highly-rated German club, RB Leipzig. This can be noticed by the arrival of players like Tyler Adams(from New York Red Bulls), Konrad Laimer(FC Red Bull Salzburg), Dayot Upacemano(FC Red Bull Salzburg), recent signing Hwang Hee-Chan( FC Red Bull Salzburg) etc.

German Football Association follows a ‘50+1’ rule, under which a club should own a majority of their rights. This was made to prevent such takeovers by investors. However, the Red Bull company found a few loopholes in the rules to acquire and re-structure the SSV Markranstadt. The club has only 17 members with voting rights, all of whom are employees of Red Bull. Membership is provided to the public at a whopping  €1000 without voting rights. In short, the club is completely managed by Red Bull. The German Football Association also has a rule against naming clubs with titles of their sponsors. Hence the name RB Leipzig, short for RasenBallsport Leipzig. The name allowed it to use the company’s RB initials. All the other clubs owned by the conglomerate are named after their sponsors, Red Bull.

RB Leipzig has a very progressive football philosophy. They do not splurge cash on star players. Instead, they invest in identifying and developing talented young players no older than 24. RB Leipzig has been home to young super-talents like Timo Werner, Naby Keita, Joshua Kimmich, Dayot Upamecano etc. Their most expensive player Naby Keita cost them €26.78m from FC Red Bull Salzburg, their sister club. Salzburg bought Naby Keita for a meagre €1.45m. The star midfielder was sold to the English Champions for €48m. FC Red Bull Salzburg has brought stars like Sadio Mane, Erling Braut Haaland, Hwang Hee-Chan, Takumi Minamino to the limelight. Their investment in promising young players has definitely paid off.

After being promoted to the 4th tier Regionalliga Nord, RB Leipzig found it hard to get promoted further up. That is when Red Bull announced the arrival of Ralf Rangnick as Sporting Director for FC Red Bull Salzburg and RB Leipzig, in 2012. The ex-Schalke and Hoffenheim boss was brought in by their Head of Global Football and former Liverpool manager Gerard Houllier. Promotion followed for both teams the very same year. This takeover was key in the club’s success. The club was promoted to the Bundesliga in 2016, 7 years after its formation in the 5th tier. He is the architect behind the whole project, with the club imbibing his philosophy towards the game. He made the team a younger, faster, high-octane footballing team. In 2015, he took himself to the dugout as head coach to complete Leipzig’s promotion to the Bundesliga. Rangnick has taken the reins twice while Leipzig were in between managers till the arrival of Julian Nagelsmann in 2019.

We all know the difference he has brought to the club. In 2020, He became the youngest manager to win a Champions League knockout tie when they beat Tottenham Hotspur 4-0 in the Round of 16. Nagelsmann is also the youngest manager to reach the Champions League semi-finals at the age of 33. From topping the Bundesliga table mid-season in the 2019-2020 season, to giving a scare to German giants Bayern Munich and to eventually finish 3rd this past season just below Borussia Dortmund, this club has made their mark in the Bundesliga.

Leipzig signs players with specific traits that fit into their system. With the electrifying pace from Timo Werner (Who is with Chelsea now) in tandem with the physically and aerially strong Yussuf Poulsen being serviced by the wizardry of Emil Forsberg and Marcel Sabitzer, RB Leipzig quickly became one of the highest-scoring teams in the Bundesliga. Quick, high endurance wing-backs who contributed in both ends of the pitches coupled with well-built but smooth on ball centre backs such as Upamecano provided the team with the defensive solidarity it required to thrive.

Leipzig employs the 4-2-2-2 formation in their usual style of play. Nagelsmann also uses the 3-4-1-2 against bigger teams with an efficient number 6. Nagelsmann employs an attacking midfielder like Emil Forsberg to match with their defensive midfielder. It also gives them the numerical superiority in the midfield. The versatility of players is key for Nagelsmann’s players, as this allows for greater flexibility in their formation which may vary game to game or minute to minute in a match. Konrad Laimer switched from his natural right-back position to a central/defensive midfield position last season. He has made more tackles(89)  than any other player this season in the Bundesliga. Lukas Klostermann shifted away from his role as a right-back now to centre-back, while Werner operated as both a winger and attacking midfielder in addition to his usual position up top. Leipzig play a possession-based style of football. Their fullbacks overlap frequently to help with the attack by swinging in crosses into the box or playing diagonal balls to the nearby striker. Their defence holds a very high line in order to catch the opposition offside and also to help with the pressing off the ball. The team puts into effect the “gegenpress” very efficiently to regain the possession of the ball once it’s lost. Leipzig employs the double pivot in midfield, where one of the 2 pivots has a more attacking role than the other. Leipzig have almost always played with 2 strikers upfront with Poulssen/Schick as a target man, making this one of the most lethal attacking teams in the Bundesliga. The 2 strikers are also key to their high-pressing game. 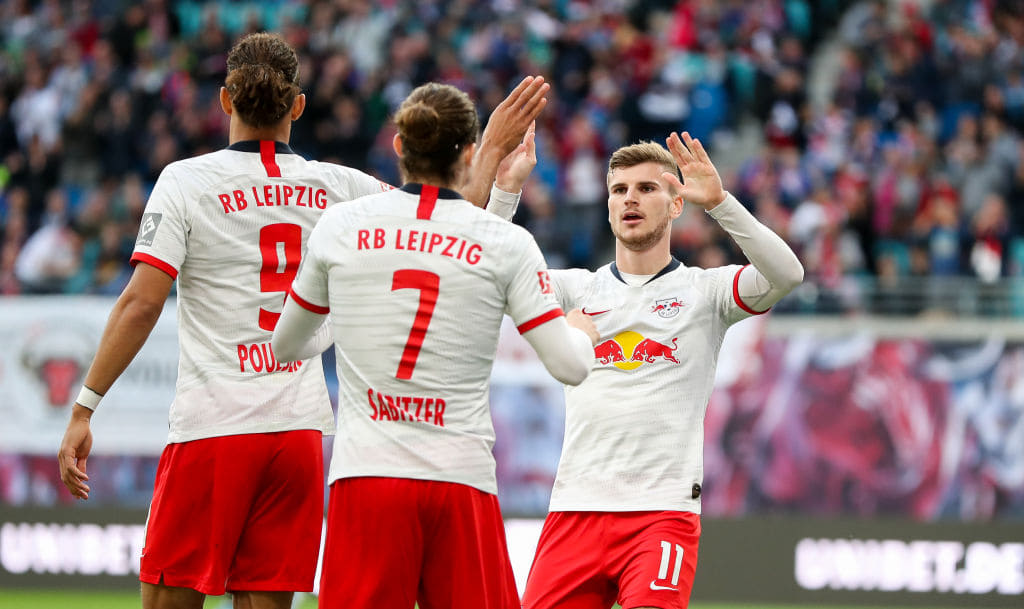 ‘Die Roten Bullen’ (the team’s nickname meaning ‘The Red Bulls’) despite being one of the most successful teams in such a short span of time, unfortunately, is also the most hated club in Germany. Most German football followers don’t see the team as one which follows the ethos of German football, mainly due to being owned by a multi-million dollar company and hence the access to a lot more money. Fan groups around the Bundesliga routinely boycott trips to Red Bull Arena and nearly all of them display banners with scathing slogans. Dortmund had once boycotted their trip to the Red Bull Arena saying the club shouldn’t make an income from the ticket charges they’d pay for. Nearly every game that Leipzig plays these days is a derby of sorts, one based on philosophies rather than geography, but none has overtones more bitter than the games at Dortmund. In February 2017, Leipzig’s first visit to Signal Iduna Park, a mass of Dortmund supporters tried to block the visitors’ bus in hopes that the game would have to be abandoned. Leipzig have to face open criticism from several other clubs and fan groups due to the club’s ethics.

Thus RB Leipzig’s success is crucial to the Bundesliga. By giving East Germany a first real representation among the elite clubs, it allows the league to finally stake a claim as truly representative. And through their youth-centric, progressive mentality towards football, they are providing other entities with a sustainable blueprint on how to build a football club from scratch, run it flawlessly and reap rich rewards from it.

Nabhan is currently pursuing his graduation from University of Hyderabad. An ardent fan of football, he writes about his passion occasionally.

‘UNFAIR’, ‘RIDICULOUS’, ‘BAFFLING’ – ARSENAL FANS ARE FURIOUS AFTER OZIL OUT FROM PL SQUAD