Messi magic again once again… Argentina beat Australia by 2-1 in the 2nd match of the round of 16 at Ahmed bin Ali stadium. Argentina made just one change from the XI that beat Poland 2-0 on Wednesday, with Gomez starting ahead of Di Maria. While Australia made a single alteration from the side that beat Denmark 1-0 last time out, with Baccus replacing Goodwin on the left wing. Another important of this match was Lionel Messi made his 1,000th appearance in senior football for Barcelona (778), PSG (53) and Argentina (169) in this match.

In the 35th minute, Messi’s initial free-kick into the six-yard box was repelled by Souttar, but the Albiceleste regained possession and looked to hit from a central position in the second phase. Mac Allister played a pass into Otamendi, whose first touch tees Messi up for a shot expertly and the captain met it with a sweet hit into the bottom-left corner to beat Ryan!What a magnificent goal by Messi… It’s 1-0. Lionel Messi scored his ninth World Cup goal, and first in the knockout stages of the competition. Also, Lionel Messi scored his 789th career goal in all matches. In the 57th minute, Argentina’s pressing paid dividends, with the midfield stepping up immediately to try and win the ball back following Ryan’s throw. A poor pass back from Rowles put the goalkeeper under pressure inside his area and allowed Alvarez to steal it back and slot it into an empty net! It’s the second goal by Julian Alvarez. It’s 2-0.

In the 77th minute, Australia scored one. It’s a goal out of nowhere, with Goodwin’s effort from 25 yards out followed by a repelled cross, taking a touch off Fernandez’s face and wrong-footing the goalkeeper! It went down as an own goal for the Benfica midfielder, giving the Socceroos a chance with 13 minutes left. It’s 2-1. After that goal, Australia got a chance for the equaliser. 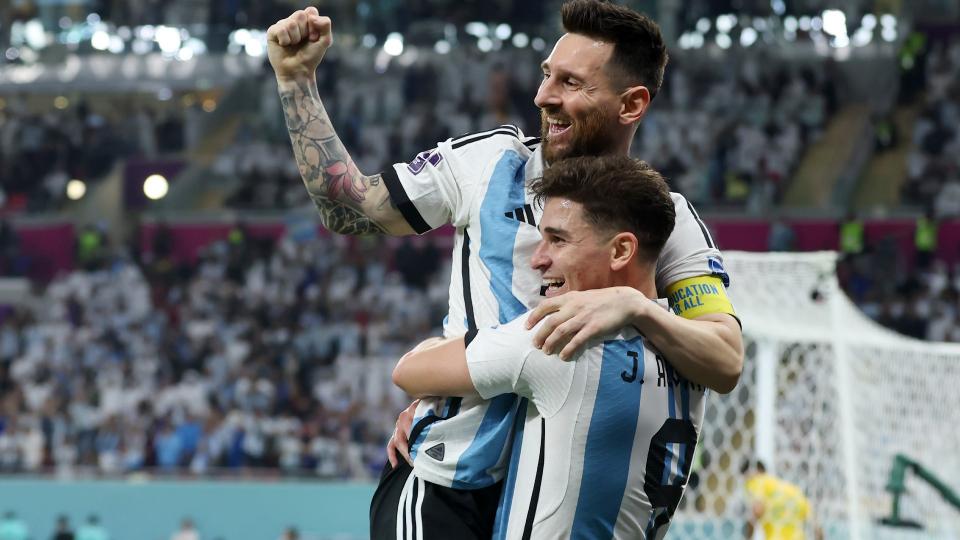 In the 97th minute, A cross to the far post was controlled inside the penalty area with a lovely touch by Kuol, who immediately found himself in enough space to turn. The substitute fired a low shot that Emiliano Martinez saved superbly, to the relief of all of Argentina. Scaloni’s side would ultimately see out the remainder of the game without adding to their lead despite promising opportunities in injury time but hung on to book their fourth quarter-final trip in the last five World Cups.