Hervé Renard: A Name To Remember

After Argentina vs Saudi Arabia match “Herve Renard” was one of the most searched names on the internet. Who is he? He is the coach of Saudi Arabia, who defeated Argentina 2-1 after being unbeaten in 36 games and were said-to-be favourites to win the World Cup. It was a tactical masterclass that Herve had done with the 25m Saudi side to beat the 600+m Argentina side. Herve’s strategy was to play Highline defence against Argentina’s attackers, which was executed well by defenders and led to one of the best results in Saudi Arabia’s football history.

Argentine players were caught offside 10 times in the match in which 3 of which could have ended as a goal. Saudi had only 30% ball possession and 68% throughout the game. Argentina’s 4-4-2 formation with Messi and Lautaro at the front wasn’t a good move against Saudi’s Highline. Still, Argentina managed to take 6 shots on target, and 5 of them were saved by Saudi Arabia’s goalkeeper Mohammed Alowais who won the man of the match.

Herve Renard started his managing career at SC Draguignan in 1999, and 2000 then joined the Chinese side Shanghai Cosco as assistant manager under Claude Le Roy. Later in 2004, he was appointed as head coach of Cambridge United, Where he has done a great job in maintaining the fitness level of players by proper training methods. But due to the loss of leading players, he couldn’t get the results and was sacked later the same year.

This half-time talk by Saudi Arabia coach Harve Renard is EVERYTHING you will need to see today 🔥 #Qatar2022 #WorldCup2022 pic.twitter.com/dT5Q33Nnee

After leaving Cambridge he worked with Nam Dinh and AS Cherbourg, Then joined as head coach for Zambia national team. He took the Zambia team to their first-ever quarter-finals of the African Nations cup in his spell there. He left the job before his contract period was over and Joined Angola National team and then USM Alger.

He returned to Zambia for his second spell in 2011, which was the start of his golden era. He led Zambia to its first-ever African Nations cup in 2012. His spell at Zambia didn’t end well as they couldn’t make it into the knockout stages in next year’s African Nations and he took all the responsibility for their loss. Renard also criticized CAF for not letting Zambia participate in the Confederations cup after their title win. 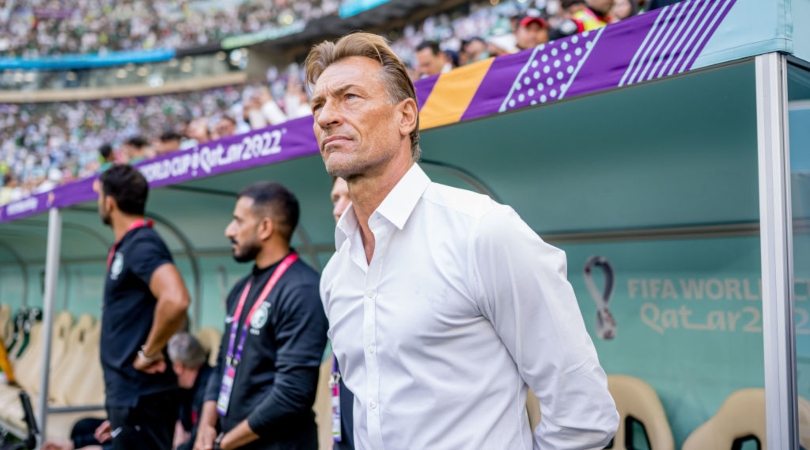 He then joined as Ivory Coast’s head coach in 2015 and once again he won the African Nations cup and became the first-ever coach to win two AFCONs with different nations. After his time on the Ivory coast, he managed Lille and wasn’t successful. Later joined Morocco and helped them to qualify for the FIFA World Cup, The first time in 20 years.

At present, he is working with Saudi Arabia and led them to the world cup and their first-ever world cup opening game victory, and that too against Argentina.

The Black horses of the Qatar World Cup 2022