Switzerland increases chances of qualifying for the last 16 of Euro 2020 by beating Turkey with a superb performance in their final Group A-game.

Xherdan Shaqiri and Haris Seferovic, both criticized by fans for their poor performance and place in the team, became the heroes of the game with some fine goals. Steven Zuber was another warrior in this victory with all 3 assists for the Swiss side.

Turkey, the team predicted as the dark horses for the tournament are out of the championship with zero points and minus seven-goal difference.

Turkey unleashed the attack in the early minutes of the first half with a shot on target which tested Yann Sommer from distance. Despite Turks attacks, Swiss was the one who found the back of the net twice in the first half.

Haris Seferovic scored the first goal from 20 yards early in the 6th minute and after the 25th minute of the game, Shaqiri scored his first goal of the brace with a curling shot from the edge of the box.

Sommer made a wall in swiss goal as he saved series of Turk’s attempts in the first half. On the other side, Turkey’s goalkeeper Ugurcan  Cakir made some impressive saves to stop the Swiss side, knowing a five goals swing will lead them to second place in the group.

Turkish scored their first goal in the tournament by a long-range drive by Irfan Can Kahveci-his first international goal–in the 62nd minute of the game. But Shaqiri regained the two goals advantage six minutes later with a clinical finishing shot from Steven Zuber’s pass.

Both teams made remarkable 41 attempts on goal but unbelievably only 4 goals were produced in-game. Both sides made more than 10 shots in the first 45 minutes of the game. This only happened twice in a Euro championship since 1980. The other one was in the last 16 games in Euro 2016 when Switzerland played against Poland.

Shaqiri won the star of the match award for his stunning performance as his side have to wait for the group stage to finish to see their further possibilities in the tournament. 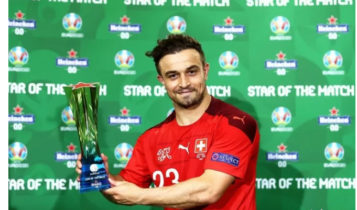