As it is, Madrid intends to rely heavily on young Vinícius junior and veteran Karim Benzema again next season. However, if either player experiences any kind of setback, the team's fortunes might quickly turn for the worse.

After being denied by one of the modern superstars and a generational prospect from France, Kylian Mbappé, Real Madrid is more frustrated and unhappy than ever. Real Madrid’s worldwide fanbase and executive staff are devastated by the player’s late decision to reject the club he had previously called “the club of his dreams.”

Madrid did not go all out to sign Erling Haaland because they were holding out hope for the arrival of Mbappé. Superstars from all over the world have preferred to visit Madrid at least once due to the storied history of the club, and many have viewed Madrid as a potential destination at some point in their careers.

However, since then, Real Madrid has added two players to its roster; strong and solid central defender Antonio Rüdiger (via a free transfer from Chelsea) and French defensive midfielder Aurélien Tchouaméni. Under Carlo Ancelotti’s seasoned leadership, Madrid won La Liga and European silverware for a record 14th time last season. After this, Carlo was able to win trophies in the five best leagues in Europe. despite widespread pessimism about the club due to its thin roster, advancing age in the midfield, and defensive pairings that few believed would succeed.

How magical was whatever Carlo did with the team?

In spite of the fact that 4-3-3 is Carlos’ preferred formation, Madrid frequently switched to other formations such as 4-2-3-1, 5-4-1, etc. Because of the contributions of players like Thibaut Courtois of Belgium, Fede Valverde of Uruguay, Nacho Fernandez of Spain, Rodrygo of Brazil, and Lucas Vasquez of Spain, among others. 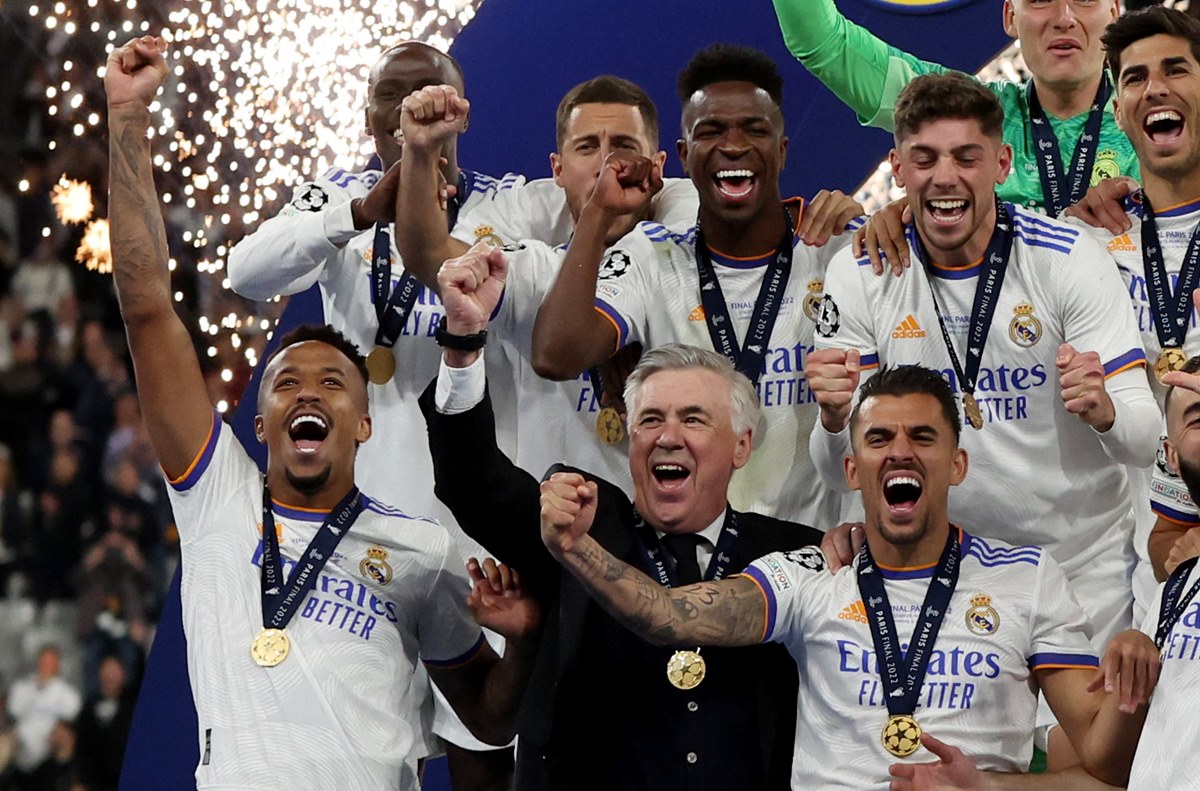 Carlo always utilized Fede Valverde, who can sprint fast and recover the ball efficiently, on the right side of the field instead of a dedicated right winger. So, essentially, his success in the major games hinged on his willingness to switch well.

Four European powerhouses were eliminated by Madrid in successive rounds of the playoffs. Perseverance, a champion’s mindset, the linking play of Vinícius junior and Benzema, and the mature midfield of Casemiro, Kroos, and Modrić, all played significant roles in Real Madrid’s 14th UCL victory.

It was all about Benzema in this team.

Benzema was the driving force behind all of Real Madrid’s victories; in the games, he missed due to injury or other overdue, the team was unable to secure a comfortable victory. The second El Clásico was a perfect illustration of this; Carlo overthought and started Modrić at number nine instead of Benzema, and his squad was blown out 4–0 by a subpar Barcelona side.

Memes have it that Carlos’s original game plan was to throw the ball to Benzema, and Inshallah everything would work out!! All of the players made it to the season’s last game in top shape thanks to fitness coordinator Antonio Pintus and his crew.

As it is, Madrid intends to rely heavily on young Vinícius junior and veteran Karim Benzema again next season. However, if either player experiences any kind of setback, the team’s fortunes might quickly turn for the worse and everything may go southwards, especially because no suitable backup exists for Benzema. According to the media, Carlo Ancelotti has Eden Hazard lined up as a backup for Karim Benzema.

What should Real Madrid do now?

Today’s top teams no longer rely on a single player to carry the team’s offensive load. Barcelona, Athletico, and Sevilla, three of the club’s biggest competitors, are well ahead of the pack in developing offensive systems that don’t center on their star players.

My preference as a fan is to see Real Madrid employ a system similar to that of Jürgen Klopp, Pep Guardiola, or José Mourinho, rather than simply sending out our top players and hoping for the best.

Many have noted that Madrid’s wish for Kylian Mbappe’s debut to coincide with the opening of the new Bernabeu was not granted because of the enormous pressure from the two nations. However, Real Madrid supporters are confident that Florentino Perez’s “magic box” would contain something to lift their spirits, given that he was the one responsible for bringing the Galacticos together.

Hisham aspires to be a sports journalist and focuses solely on covering developments in the world of football. At present, a Ph.D. candidate in social work at Pondicherry University.