Oyarzabal’s winning kick saw La Roja through to the semifinals in a match they should have easily won, but for a heroic rearguard performance by the Swiss

Spain booked a semifinal spot at Wembley on Wednesday with a narrow victory against
Switzerland, who took them all the way to spot-kicks despite going a man down in the 77th
minute. It was a great defensive performance by the Swiss, helped by a lack of cutting edge
from Spain, in a largely lacklustre match that turned into a siege on the Swiss goal only after the
red card.

Spain had taken an early lead, the unfortunate Denis Zakaria deflecting in a Jordi Alba shot for
the 10th own goal of the tournament, but they prioritised control over penetration in a dull
display. They paid for this approach after a defensive mix-up midway through the second half
gifted an equaliser to the Swiss, scored by Xherdan Shaqiri. 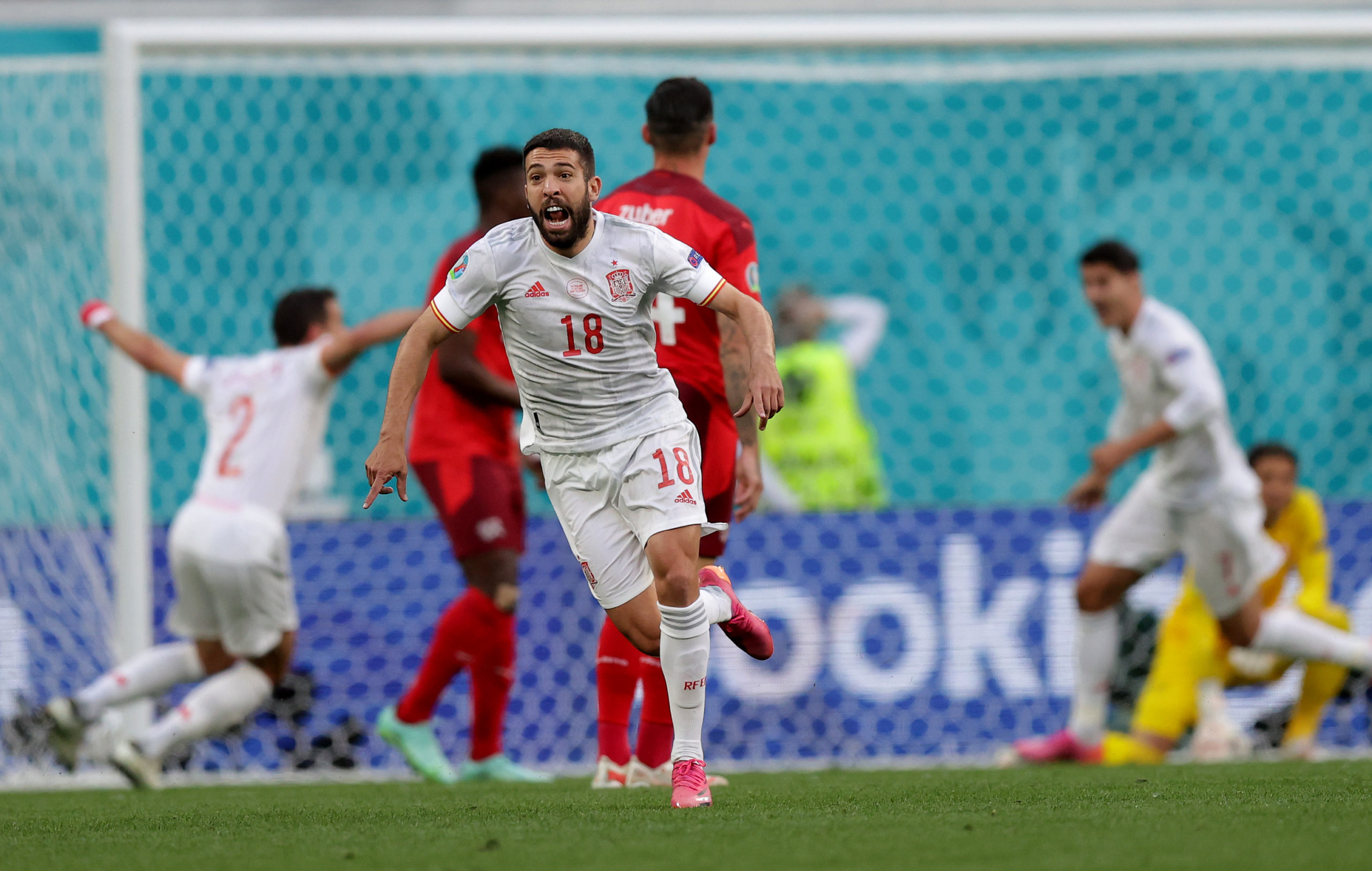 Remo Freuler’s red card 10 minutes later changed the shape of the game. Spain laid siege to
the Swiss goal but were kept out by the brilliant Yann Sommer and his combative defenders for
the rest of normal time and throughout extra-time. In a second consecutive penalty shootout, the
shattered Swiss players then lost their nerve, converting only one of their four kicks, to hand
Spain the win.

Both sides came into this quarter final encounter in St. Petersburg after exhausting matches in
the round-of-16. Spain had withstood an epic Croatian comeback in normal time to clinch victory
with two extra-time goals. Switzerland had completed an epic comeback of their own, coming
from 2 goals down to draw with France and then beating the world champions on penalties.
Luis Enrique made two changes to his side, with Pau Torres and Jordi Alba returning to the
defence in place of Eric Garcia and Jose Gaya. Vladimir Petkovic, on the other hand, was
forced into his only Swiss change, with captain Granit Xhaka suspended after being booked in
their last-16 win and replaced by Dennis Zakaria. Xherdan Shaqiri was given the captain&#39;s
armband.

Spain settled into their usual dominance of the ball from the first minute, pinging it around and
hardly letting the Swiss have a sniff of it. They were rewarded in the 8th minute, a corner into
the Swiss box being cleared only as far as Jordi Alba, whose powerful shot from outside the
area looked to be heading straight at Sommer. But a massive deflection off the boot of Zakaria
completely wrong-footed the Swiss keeper and the ball flew in.

Spain should have pressed their advantage against opponents who only looked capable of
putting together a few counter-attacks, but their approach was to control possession and sit on
their lead. Even after Breel Embolo, Switzerland’s biggest threat on the counter, went off
injured, the Spaniards persisted with their gameplan.

There were very few notable chances in the remainder of the first half, with Alba and Pau Torres
both heading straight at Sommer from corners and Manuel Akanji and Silvan Widmer heading
over at the other end.

Luis Enrique made a half-time change, replacing Pablo Sarabia with Dani Olmo, and the
youngster added some sharpness to Spain’s attack. They created several opportunities in the
opening minutes of the second half, with Olmo and Ferran Torres effective on the wings, but
lacked the finishing touch.

Spain then discarded that sense of urgency and went back to stroking the ball around languidly.
They were nearly made to pay in the 56th minute, Zakaria steering a downward header inches
wide of the post. Soon after, Steven Zuber drew a good save from Unai Simon after a forceful
run and close-range shot.

Enrique’s men failed to learn their lesson, however, and paid the price in the 68th minute. A lack
of communication between the centre-backs Pau Torres and Aymeric Laporte saw the former
clank the ball off the latter’s shin under no pressure. Freuler ghosted in between them and
squared the ball for Shaqiri, who was left with the simple task of slotting home from about seven
yards.

🌟 Unai Simón. That's how you react to a setback 👏👏👏#EURO2020 | #EUROSOTM | @Heineken pic.twitter.com/RKykuBwqbF

Then came the turning point of the game. In the 77th minute, Freuler slid in late on Gerard
Moreno in an attempt to win the ball and was sent off by referee Michael Oliver, a decision
upheld by VAR. A different referee may have only brandished a yellow card, but Freuler’s tackle
had been a reckless, foot-off-the ground one, even though he made contact with the ball first.
From that point on, it was a game of attack versus defence. The white shirts of Spain came in
waves, crashing time and again into the banks of four set up by the Swiss.

But despite the best efforts of the Spanish players, the Swiss lines held firm, sending the contest into extra-time. Most people expected Spain to cash in on their extra man advantage and finish off the game in extra-time and they nearly did just 2 minutes in. Alba’s dangerous low cross from the left was
somehow not converted by Moreno, who shot wide from close range when it looked easier to
score than miss. Alba, the best Spanish player on the pitch, then forced Sommer into a good
save with a stinging shot.

The Swiss keeper then pulled off more heroics, producing an outstanding close-range save from
Moeno and punching clear from the subsequent corner. He continued his excellent work in the
second half of extra-time and was ably supported by his defenders as Spain threw the kitchen
sink at them. Ricardo Rodriguez pulled off an incredible last-ditch, goal-saving tackle to prevent
Marcos Llorente from scoring and the Swiss held on for penalties. 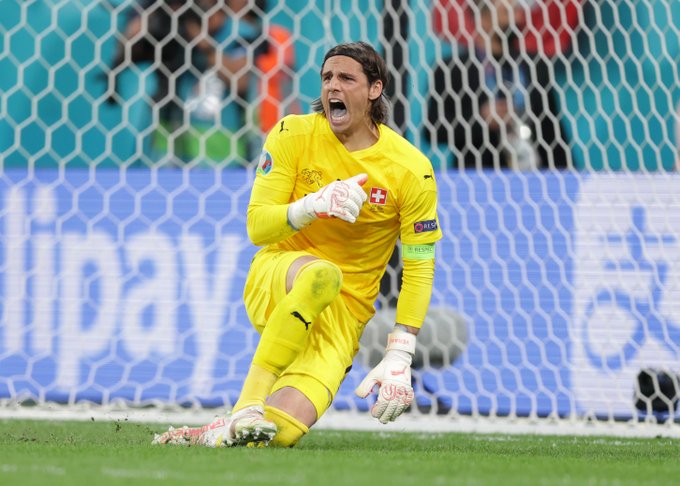 They looked the favourites for the shootout, considering they had converted all five kicks against
France. But here Petkovic’s side looked physically and mentally shattered and, although Spain
twice handed them the initiative with Sergio Busquets hitting the post and Sommer saving

Rodri’s kick, the Swiss were unable to capitalize. Fabian Schar and Akanji saw their shots
saved by Simon and Ruben Vargas blazed over, allowing Mikel Oyarzabal to step up and send
Spain through.

After their unflinching defensive display, the Swiss players took the defeat hard. Vargas was in
floods of tears after their elimination was confirmed. But after the emotions subside, they will
look back on their performances in the tournament with pride. They had knocked out the
favourites France and had come agonizingly close to picking up another big scalp in Spain.
They were applauded off the pitch by both sets of fans and their opponents.

The Spanish armada had won through at the last. Despite lacking the killer instinct they had
shown in front of goal in their 5-3 win over Croatia, they showed plenty of the grit and
determination from that match to keep attacking and carve out opportunities. Now they turn their
sights to a Wembley semi final encounter with an in-form Italy, who beat Belgium 2-1 in the
other quarter final of the night. It promises to be a mouth-watering clash.

Heartbreak for Belgium as invincible Italy set up Spain semifinal