In the midst of the 2007 summer transfer window, Spanish giants Real Madrid signed a rising Brazilian baller as a potential replacement for the legendary Roberto Carlos, setting the seal on his 15 years long career at Santiago Bernabéu. From there, Marcelo went to carve his name in the history of Los Blancos as one of the best full-backs ever entertained the show and was sent off as the most decorated Real Madrid player with 25 trophies including five Champions League and six La Liga titles.

Marcelo Vieira, a man who managed to rewrite the classical football pundit’s theories on full-backs. Most of the professional players joining Real Madrid were exciting, but for Marcelo, the move to the Spanish capital was beyond every expectation; He was awarded a fabulous chance to learn from the idol of his days on the streets of Rio de Janeiro, growing up.

During the initial month of the 2007/08 season, that was the time when Marcelo had to stand up for the cause; the question as to who he was? Madrid fans then were heavily haunted by the memories of seemingly irreplaceable bullet man’s legacy as in shadows. It did, always lay over the shoulders of young Marcelo whenever he lined up in the left corner of Madrid’s epic coliseum. But it was too much for a little boy from the Botafogo beach ever could have dreamed of.

The starting season noticed early disappointments amongst the fans. Maybe, the fans weren’t impressed by his little footsteps. Even so, young Marcelo did not let go of the smile on his face. By the end of the debut campaign (2008/09), Marcelo won the hearts; of his coach and thousands who were screaming from the gallery of Los Blancos. Position secured for the Brazilian!

2008/09 campaign under the coach Juande Ramos wasn’t much aspiring for the young Marcelo, as Juande wants immediate results on the pitch. Juande even tried a positional shift for Marcelo. Fortunately, it suited well for him as he always looked to go forward and create a way to goals. When Manuel Pellegrini took charge of Madrid in the 2009/10 season, his famous “hiring and firing” policy made a tremendous impact on the statistics of Marcelo. He finished the season just behind Cristiano Ronaldo and Kaka in the number of assists.

When Inter Milan lifted the 2010 Champions league trophy and flew back, only one man remained in the Spanish capital city for the next three years. None other than Jose Mourinho, the energy bomb in the coaching field. Hopefully, Mourinho was convinced by the consistency of Marcelo on the pitch. With the arrival of Coentrão in 2011 for a significant transfer fee of €30m, Marcelo’s role became contested. Still, the Brazilian succeeded in his role. “I wasn’t sure at first, but now I loved him” Mourinho later commented on the Brazilian he trained. 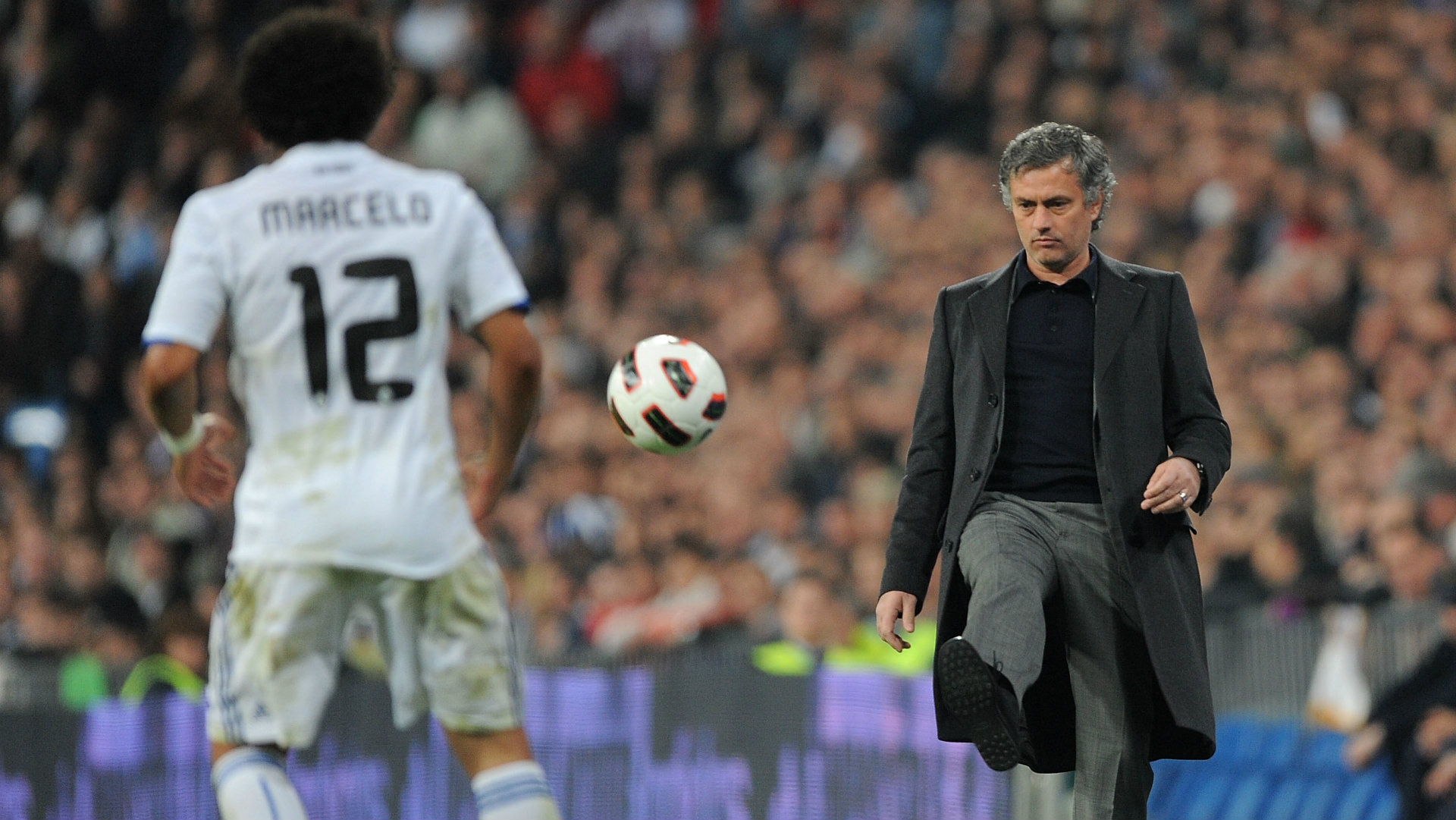 Working with the maestro Carlo Ancelotti, the brazilian was magnified for the role of a superstar in the hearts of zestful Madrid fans. Zidane’s era started with the promotion of Marcelo as the vice-captain and a stalwart. He was the center of attraction on and off the field. His ability to control the whole left flank made him the best in the position at the time.

It was Cristiano Ronaldo who benefited from this, from time to time. Zidane transformed him into a box-to-box left-back who always contributed toward the goal. Without a left-back like Marcelo, the role of Cristiano wouldn’t have been the same at Real Madrid. Cristiano and Marcelo shared nine glittering years together at the Bernabéu, as the former enabled the Portuguese superstar to become the club’s ever-leading goal scorer. 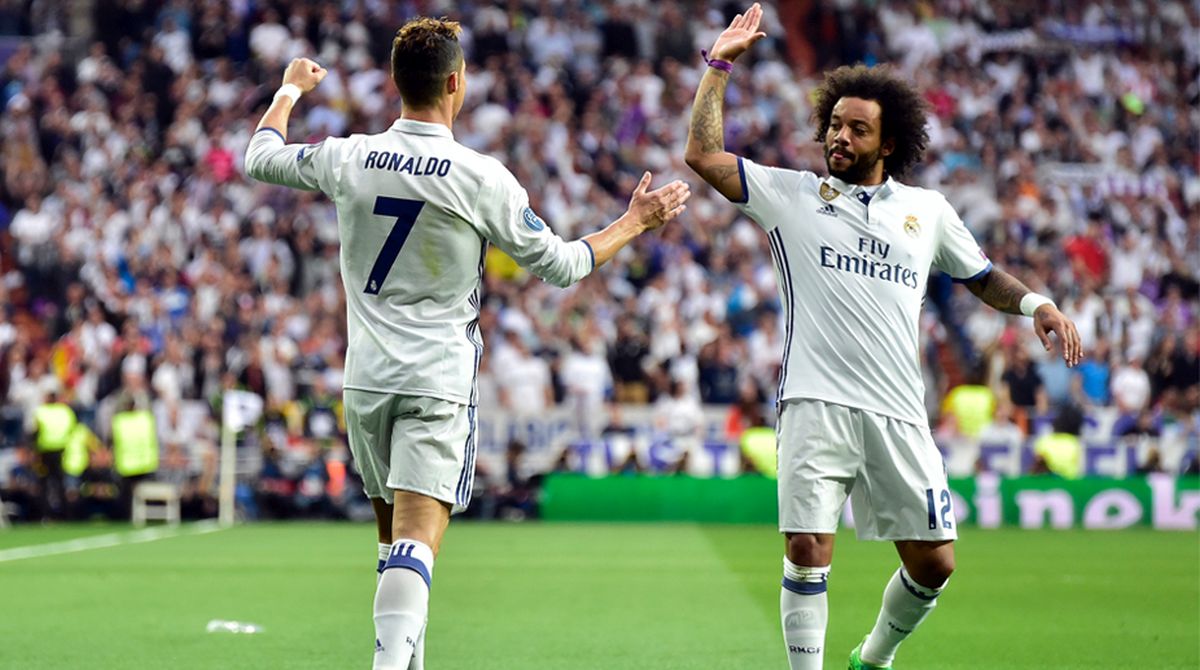 Even the tribute ceremony for captain Marcelo was epic. Joined Madrid in 2007, Marcelo was given a fairy-tale ending after lifting his fifth Champions League title in one magical night in Paris. The Brazilian made 545 appearances in which, He netted 38 times and assisted 103 as he played in the left-back position.

“It has been a wonderful adventure. Today I leave Madrid being the player with the most titles in the history of the best team in the world”, Marcelo becomes emotional as he said this in the farewell ceremony. More importantly, Marcelo kept his promise of following the role of his idol Roberto Carlos. “He is the best full-back in the world and has more ability and quality than me”, Roberto Carlos commented on Marcelo as his replacement. “It would be impossible to surpass Roberto Carlos, as he’s the best”, Marcelo replied.

Aforesaid was a story of keeping the left-back position of one of the most decorated clubs in the world for more than two decades, one by one, by two Brazilian beasts. Lastly “I want to make history as Marcelo, not just like Roberto Carlos’s replacement”: He kept his word!

Fazal Muhammed is an Economics graduate, Football enthusiast, and an ardent fan of Real Madrid CF.